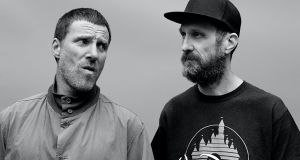 Until the live performance industry gets up off its knees and starts to run and sweat again, Jason Williamson will, he confirms from his home in Nottingham, continue to lay low. The “sprechgesang” vocalist of Sleaford Mods spent much of 2020 ferrying his kids to and from school and staying at home, working as best as he could under pandemic circumstances. Worry or not, he will ride it out.

“We’ve saved money, so we’re okay for the time being, and I’m also consciously cutting myself off from panicking or feeling anxious about when I’ll be able to go back to work as a performer.”

Duly noted, it is nonetheless an exercise in creative wing-clipping that the UK’s most potent protest band (whose music was once described as “being trapped in a pub with a disturbed alcoholic”) is currently under lock, key and Covid-19 restrictions. Since their inception in 2007, the duo (Williamson’s partner in music is Andrew Fearn) have wilfully and coarsely lashed out at what they view as a Britain under the cosh of austerity and overseen by a gang of feeble politicians. Modern life is rubbish? You could say that. Williamson does.

“Politics, the socio-realistic aspects of living in the UK – you’re hoovering it all in every time you get in your car and look out the windows, aren’t you? That, essentially, is what defines my songs, what I write about, and that’s always been the same.

“In the early days, I was closer to a defeatist lump of hopelessness – I had no money, I was living on a high diet of cocaine and alcohol, I had lots of mental health problems. I have pulled myself out of all of that, and I’m now able to stick to the main thing, which for me is soaking up everything I see, hear and experience, and translate that through songs.”

Does he think the songs are lighter, I ask, because the negative elements of his life are no longer present? Do we detect a slight seething noise coming all the way from Nottingham? Yes, we do.

“I’ve just been the same, mate. What defines me is what I see around me. Plus, as I’ve gotten older, I have become more politically aware. Anything that I find unpleasant in the political arena – and let’s face it, that’s everything, what with my country’s history and the way the government hasn’t been truthful to its citizens – is something of a continued inspiration to me.”

And continued conflict? “Yes, because right now it’s embarrassing to be English. I feel ashamed, frankly. There’s nothing to feel proud about being English. I was never a nationalist anyway, but I always used to feel lucky because I was born here. It always seemed to be a safe haven, a more advanced country. It is that in many respects, but what Brexit has shown us, to a certain degree, is the true nature of the English people.”

He takes a breath long enough for me to ask what that true nature is. “In the main, narrow-minded, completely patriotic in a negative sense, uneducated, uninformed, lazy, racist, somewhat privileged. I don’t like any of these.”

Williamson admits he has no idea how to piece together a broken country or what kind of governance should be provided other than “infantile ideas of pampered, privileged idiots from the upper classes”. As an artist and commentator, however, he says he revels in “the hopelessness of it all and try to take from the negative landscape something that reflects it but at the same time phrase it in music that is interesting, has got rhythm and is appealing to listen to”.

“I don’t think I’m just barking my bulls**t and shoving it down people’s throats. Sleaford Mods are a punk band, really, but we’re also very much interested in the mechanisms of pop music, verse-chorus-verse-middle-eight, and so on. As the years pass and the more desperate you feel, you take solace from creating music that has a clear message, that is yours, that attracts other people towards it, and that gives you some kind of satisfaction.”

Not performing and playing gigs may dampen that sense, he allows, but it doesn’t impact on the creative communiques coming from Sleaford Mods HQ. “You learn to adapt and tailor your message within the boundaries you find yourself in,” he reasons. “When we were able to gig, the boundaries were wide apart because you could travel, you could move any way you wanted, but right now those boundaries are closed.”

And yet even with shutters up the protests continue. Williamson’s touchstones in this area are few and far between. He isn’t overly familiar with the music of contemporaneous protest songwriters such as Woody Guthrie, “but I certainly connect with his sentiments, and I love the fact that he had the words ‘this machine kills fascists’ written on his acoustic guitar. There’s a clear punk ideology there.”

He specifically cites rap and hip-hop, and its variants, as the only areas where people are consciously discussing important sociopolitical issues. “There are some singer-songwriters I listen to that give across a sense of futility, but that’s about it. Punk bands? No, not for me.”

As proven by Sleaford Mods’ new album, Spare Ribs, creativity during lockdown can deliver intriguing results. Work started on it a few months before March 2020. “We had a loose idea of what it was going to be, what it would sound like, but then we went into mutual hibernation. Andrew sent me some ideas but they didn’t work; we eventually got into a studio at the same time and that made a crucial difference. Gradually, it came together.”

The end result is, as John Peel observed about Manchester band The Fall (a clear influence on Sleaford Mods), the same but different. Williamson and Fearn make music that doesn’t necessarily need the steady steering hand of a producer, but while the rawness remains the band has, surprisingly, added vocal collaborations and traditional song structures. It’s a natural evolvement, says Williamson.

“We were really nervous about it, to be honest. Collaborating? Sleaford Mods? Is that really going to work? We weren’t sure because so many people try it, and it sounds awful. We were sick of what we regarded as s**t collaborations, so it was a bit risky, but we really think it worked.” Assisted on various tracks by UK singer Billy Nomates, Australian vocalist Amy Taylor and Nottingham academic Lisa McKenzie, he says that “prayers were answered because we worked with people whose music we admired and liked”.

As for veering towards more conventional songs, the explorative, story-like work of Aldous Harding and Alex Cameron induced Williamson to dig deep and personal. One such example is the track Fishcakes, within which he explores aspects of his childhood. Due to a back injury experienced during lockdown he began to think way, way back.

“I was born with a rare form of spina bifida that didn’t completely confine me to a wheelchair,” he recounts. “But as I got older something happened to my spine that if it hadn’t been urgently attended to would have meant I’d be paralysed from the age of 11. I had a very intense operation that, fortunately for me, worked out well, and I’ve been able to lead a normal, full-bodied physical life since then.

“The injury last summer took me back to when I was growing up, and I have to be honest and say a lot of it was s**t. My parents tried the best they could, but life back then was very colourless . . . ”

Williamson drifts away from providing any further detail but retraces the latter part of his life by admitting he has been “sober for about five years. You start to get to know yourself, you begin to break down certain barriers, listen to yourself, read yourself better, and think about all the things that have happened to you.”

The mood has definitely dimmed, so on a concluding, lighter note I ask him of his burgeoning film career. “Bring it on!” he shouts up to his sittingroom ceiling. We are half-joking, and Williamson knows it. His appearance as a folk singer in director Ben Wheatley’s recent Rebecca might be of the blink-and-you-miss-it kind, but in the unpredictable world of entertainment one never knows.

“Well, I’ve auditioned for some parts,” Williamson says slowly, probably reluctantly, “but nothing came of them, so it’s a case of getting used to being turned down. That said, I’m keeping my fingers crossed for 2021!”