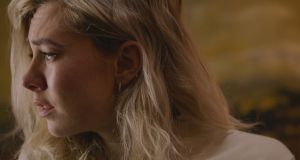 Vanessa Kirby in Pieces of a Woman

PIECES OF A WOMAN ★★★★☆
Directed by Kornél Mundruczó. Starring Vanessa Kirby, Shia LaBeouf, Ellen Burstyn, Benny Safdie, Sarah Snook, Molly Parker, Jimmie Fails, Iliza Schlesinger. Netflix/limited release, 125 min
Kirby is strong as a woman coping with infant bereavement in the first English-language film from a singular Hungarian director. There is plenty to admire here despite the dramatic lopsidedness and some rather obvious symbolism with withered houseplants. The screenplay by director Mundruczó and his partner Kata Wéber is earthy. Benjamin Loeb’s cinematography makes for a forbidding and wintry Boston. And the sense of grief weighs as heavily on the viewer as it does on the bereaved parents. TB

Nuts-and-bolts documentary that seeks to set the record straight on Robin Williams’s death. Susan Williams, his wife for over a decade, remains frustrated that they didn’t know what was happening to the entertainer. It seems that he had Lewy body dementia, a degenerative condition related to Alzheimer’s. Robin’s Wish is entirely without flash. Comprising talking heads, featuring little archive footage from the movies, it makes its case and gets out of the way before exhausting its welcome. Fans will be happy to give it that much time. DC

A woman with bipolar condition returns to her rural family after being released from prison. Though less ambitious, less expensive and considerably less flashy, Two Ways Home compares favourably with the recent ill-starred Hillbilly Elegy. The film offers an uncomplicated, unpatronizing portrait of a community that rarely gets celebrated in mainstream film. Frederick is terrific as someone who knows she has done wrong, but isn’t prepared to wear sackcloth and ashes. Sound on mental illness. Warm about family values. DC

Pomm is a carer in Thailand for white, wealthy westerners with Alzheimer’s. She looks after her patient Elizabeth generously and around the clock, singing as she cleans her, hugging her, and sleep-sharing. The same queasy global inequality explored in Lukas Moodysson’s Mammoth is evident from the opening frames of this affecting documentary. Contemplative and slow-burning, Mother is a tale of two mothers, who, for very different reasons are separated from their families. A touching tribute to the selflessness and humanity of caregivers. TB