Enough of the ‘hot takes’ already: A philosophical wish for 2021

Unthinkable: Spinoza tells us that if you want to be free then get your mind in order 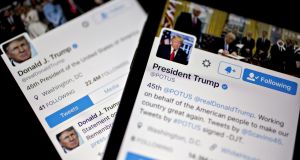 ‘Why in the world is the president of the United States using Twitter at all – a platform that depends on quick and mindless impressions?’ asks philosopher Steven Nadler. Photograph: Andrew Harrer/Bloomberg

It’s that time of year for making resolutions and breaking them, but don’t be too hard on yourself. Since the dawn of time, people have been acting against their own reasoning.

The Ancient Greeks had a name for this human failing: akrasia. The concept captures both the familiar idea that we all suffer “weakness of will” but also the more subtle notion that we make judgments and these differ from our better judgments.

The distinction seems quite alien in an age when people spew their first thoughts on to social media and then double-down on their “hot takes” with face-saving bravado or obfuscation. Would it hurt just to admit gut reactions are generally stupid?

One philosopher alive to the risk of akrasia was Baruch Spinoza, the 17th-century Enlightenment thinker who explored the ability of passion to overwhelm reason. Although he argued humans had no absolute “free will”, Spinoza was deeply concerned with freedom, and believed people could move closer to this ideal by cultivating virtue and good intellectual habits.

The outlook is neatly explained by Steven Nadler, an expert on the Dutch-Portuguese philosopher. By better ordering your thoughts you become less susceptible to the weakness of akrasia, he writes in his latest book, Think Least of Death: Spinoza on How to Live and How to Die (Princeton).

As a tumultuous year ends, Nadler channels Spinoza to give the Unthinkable column a healthy resolution for 2021: “If you want to be free, then you should observe reason’s prescriptions.”

Can you explain what is meant by akrasia?

Steven Nadler: “We all sometimes act against our better judgment. We do things that we know are bad or wrong, even when we want to do what is good or right.

“The person who suffers from akrasia can’t help themselves. They are motivated to do what reason and their moral sense tells them to do, but they end up acting contrary to it.

“Akrasia should be distinguished from a similar phenomenon, when people do what they know is wrong because they are not at all motivated to do what is right. Such a person basically says ‘Yes, I know it is right to do “x”, but why should I do it?’

“Philosophers who believe that akrasia is a real phenomenon devote their effort to explaining how it happens. For example, is it that our passions or emotions are too strong and overwhelm our reason? Does my craving for a fifth piece of chocolate cake overpower my rational belief that I should not eat it? This, at least, was Plato’s view.”

Why has the concept drifted out of public consciousness? Culturally, there seems to be a preference for “hot takes” over “considered opinion”. More importantly perhaps, modern philosophy has undermined faith in objectivity or “true reason”. What’s your own view?

“It’s a good question as to whether it has in fact drifted out of public consciousness. When I raise the topic in my philosophy classes, the students immediately recognise what I’m talking about. But it may not have been something that they had given any thought to.

“Is the problem that our cultures now focus more on immediate gratification? Is the satisfaction of our desires – whether or not they are rational desires – now our primary goal?

“Your distinction between ‘hot takes’ versus ‘considered opinion’ is, I think, a very important one. Our attention spans are shrinking, and we have lost patience for extended, rational reflection. Sound bites, visual bites, quick news – especially news that caters to our own political, social, religious and cultural persuasions and preferences – all of this is a part of the age of social media. Just look at the effect that random, thoughtless but wildly provocative tweets have on masses of people?

“Why in the world is the president of the United States using Twitter at all – a platform that depends on quick and mindless impressions?

“I don’t agree, though, that it is philosophy that has undermined faith in objectivity and true reason; on the contrary, among humanities disciplines, philosophy seems to be the one hold-out. Philosophers remain committed to the search for truth in many domains, including ethics. That’s what all our arguments – and counter-arguments, and thought experiments, and counter-examples, etc – are about.”

Is Socrates in conflict with Spinoza when he says no one knowingly does what is wrong?

“Yes, I think the two philosophers disagree on this point. Socrates believed that if you know the good – truly know it – then you will do the good. So he denies the phenomenon of akrasia. In my view, so does Aristotle – but that’s another story.

“Spinoza, on the other hand, believes that simply knowing what is the good and right thing to do will move you to actually do it only if that knowledge has enough affective or emotional power to overcome the affective power – the feeling – of a contrary passion. If my true, rational beliefs are affectively weaker than my passions then I will do what my passions compel me to do, and will probably later regret it.”

To Spinoza, everything happens for a reason. So what’s the reason for Covid-19?

“On the other hand, if by ‘reason’ you mean ‘what purpose does Covid-19 serve’ or ‘how does it fit into some plan or providential project?’, then the Spinozistic answer is: it doesn’t. To believe in purposes, teleology, divine or other providence in nature is to fall prey to false beliefs and superstition.

“Aside from the actions that humans undertake, nothing in nature happens for a reason or purpose. The real question is, why are so many politicians in this country [the United States] not willing to take the steps necessary to control the pandemic? Which brings us back to the topic of ‘weakness’.”