Would Jesus approve of Christmas? 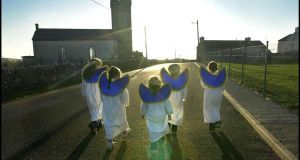 Jesus would no doubt be horrified about how commercialised Christmas has become. But would he feel any better about the way self-proclaimed Christians celebrate his birth?

The prophet born in Bethlehem had a radical, discomforting message that sits uneasily with wishy-washy sentiment about seasonal harmony and goodwill to all.

Underlying this point, philosopher Julian Baggini argues in a new book that Jesus needs to be rescued “from the literally infantilising image of the meek and mild baby in the manger who comes to bring peace”.

The perfect intellectual stimulant for religious debate this festive season, The Godless Gospel attempts, in Baggini’s words, “to extract a secular moral philosophy from the teachings of Jesus”, and the result is not entirely appealing. The first part of the book is commentary, drawing on the views of several theologians and other thinkers to show how Jesus’s main focus was on personal transformation, or metanoia, rather than the likes of political reform or looking after your family.

The second is a redrafting of the Gospels minus the miracles. It ends, naturally, with Jesus’s death sans resurrection.

Baggini, who describes himself as a “lapsed Catholic and failed Methodist”, believes this account of Jesus’s life is truer to what Jesus himself taught, arguing “the absence of resurrection is precisely what makes the example of self-sacrifice so powerful”. In the last Unthinkable column before Christmas, Baggini provides some food for thought around the dinner table this year.

How does the nativity story contribute to a misleading interpretation of Jesus’s message?

Julian Baggini: “The nativity is really about the lowliness of Jesus’s origins. It’s not a romantic birth story at all: he would have been born surrounded by animal faeces. However, in our culture, it is portrayed as a warm, cosy intimate scene of joy and harmony. This is extremely comforting and around the world people make little nativity scenes which are pretty and decorative.

“If that’s your primary image of Jesus at Christmas, you’re completely missing how challenging his message was. He wouldn’t want people to spend a lot of money on presents, or to eat and drink a lot. He wouldn’t even want us to make such a big fuss about our families. A truly Christian Christmas would be spent in the homeless shelters or with the old and lonely, not round the fire feasting.”

What authority is there to Jesus’s teachings if he is not the son of God? Why give him any more notice than the next preacher?

“If he was just a man, then his message carries no special authority. It has to be judged on its own strength. There are many ways in which it passes that judgment.

“For instance, you might ask: why should I give away my wealth if not to please a judging God? Well, Jesus never says that’s the reason why we should do it. Rather, if we accumulate material wealth it becomes a kind of burden. We become addicted to our wealth, and it becomes our God. So living more simply is a kind of liberation.

“Similarly, his teachings on forgiveness and non-judgment make a lot of sense. We forgive not as a kind of free gift to those who do wrong but in order to heal broken relationships.

“Jesus does not tell us to forgive unconditionally. If your brother refuses reconciliation after you’ve tried everything, you should cast him aside. That’s wise advice on how to live harmoniously and it requires no divine authority

“As for non-judgment, if we accept that we are all imperfect we will be less inclined to judge others. Another point is that we can do more to improve ourselves than we can others by chastising them. So when we find ourselves moaning about how stupid and rotten everyone else is, we distract ourselves from the important tasks of improving ourselves.”

A troubling aspect of his teaching is his disregard for family loyalty. You point out Jesus “pretty much ignored his mother all his adult life”. How are we to interpret that?

“I see no reason to go the whole way with Jesus on this, but what he says merits some thought. We have made the nuclear family a kind of God, putting it above all else and building our sense of identity and security around it.

“If you think about it, that’s very insular. No man is an island and neither is any family. What about our wider communities? What about those who are left behind? And why should we stick by our families even when they do wrong?

“If Jesus is asking us to question the unthinking faith we have in family then we have good reasons to listen.”

You suggest Jesus makes two advances on Aristotle’s thinking – first by challenging the assumption that one picks up vice by association with sinners, and second by championing a less self-centred version of flourishing. On those grounds, do you rate Jesus as a better philosopher than Aristotle?

“I don’t think the first is an advance. Generally speaking, hanging around with dubious people is corrupting, as anyone who has got famous and attracts parasites and hangers-on can attest. However, Jesus does suggest that the most wicked are in the most need of help, so to completely withdraw from them would be wrong.

“I do think Jesus challenges the potential self-centredness of Aristotle’s view of flourishing.

“The good life for Aristotle is one which has the good things in it: not frivolous luxuries but friendship, learning, art, and a decent material standard of living too. But Aristotle seemed unconcerned that huge swathes of society – like the slaves of Athens – could never have such a good life. Jesus’s challenge is that as long as this is the case, it is not enough to pursue our own flourishing, we should try to advance that of others.

“However, I think Aristotle was right about the ideal we should be striving towards. A good society would be one where everyone can flourish. I don’t think Jesus gives us as attractive an ideal. He is, at the end of the day, too world-renouncing. Like the ancient Stoics, he thought that all that mattered was your own virtue, and so family, friends good food and wine simply don’t matter.

“He was other-worldly whereas Aristotle was very much of this world.”

Is there any contradiction in an atheist celebrating Christmas?

“Not at all. For me Christmas is Yuletide, a festival that begins at the winter solstice and ends after New Year’s Day. It’s about slowing down, looking back over the year that’s gone, and looking ahead to the one to come, and the return of the sun.

“It’s also a time to think of others and, if we can, spend time with them. We call it Christmas because of historical accident. Without Jesus, we’d be doing much the same, as the pagans were before Britain and Ireland were Christianised.”

The Godless Gospel: Was Jesus a Great Moral Teacher? by Julian Baggini is published by Granta Books. Baggini is also a contributor to Revolutionary: Who was Jesus? Why does he still matter?, a collection of essays edited by historian Tom Holland and published by SPCK.