Unthinkable: Philosophers are being lured to ‘a dead end’, says historian of ideas Stephen Gaukroger 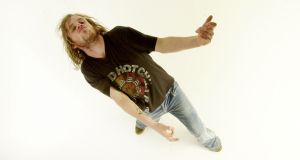 An air guitarist, or is it a philosopher? Photograph: Bryan O’Brien

Philosophy and science have a habit of getting on each other’s nerves. Like competitive siblings, both give off a whiff of superiority. While philosophy frequently mocks science’s excessive confidence, science tends to view its older relative as irrelevant. The criticism has stung and, in more recent years, many philosophers have tried to modernise their image, getting out of the armchair and into the lab coat to boost their street cred.

In political philosophy, focus has shifted from the goal of developing people’s character – an obsession of the ancient Greeks – to designing abstract legal systems generally hooked on the concept of rights.

English critic John Gray is among those to have observed this trend, citing John Rawls as the template for modern philosophers who no longer aim “to improve the political reasoning of ordinary citizens. Instead, they see their task as providing a body of principles which can best be interpreted by a court.”

Everything depends on the questions one asks, and this in turn depends on how one sees the point of the exercise

Gray is quoted by Stephen Gaukroger in a new book, The Failures of Philosophy, which traces the fortunes of their shared disciplines over two millennia. Gaukroger, an historian of ideas based in Sydney, Australia, tells the story of philosophy as a series of ambitious projects – defining “the good life”, explaining the nature and purpose of life, designing everlasting truths by reason, etc – which collapsed one by one.

Now the dominant project is shedding philosophy of all but empirical claims. While a case may be made for this, there’s a risk of philosophy “becoming merely a form of air guitar to the music of science”, says Gaukroger.

Despite his emphasis on failure, the book is a love letter to philosophy – if your idea of a love letter is 300 pages of carefully marshalled arguments. Gaukroger explains further as this week’s Unthinkable guest.

Is philosophy destined to keep failing as it explores questions that are inherently open-ended?
“Everything depends on the questions one asks, and this in turn depends on how one sees the point of the exercise. If one thinks of philosophy as offering probing questions with a view to deeper understanding, then some progress is possible. This is always relative to one’s assumptions, however. . .

“There are two directions in which one can go. If one thinks that philosophy is a question of abstracting universal content from particular circumstances, then one will seek absolute context-free answers. Philosophers who model philosophy on science will proceed in this direction. My own view is that this is a dead end.

“Instead, in The Failures of Philosophy, I tried to stand back from philosophy by exploring its historical goals, and showing how abstracting universal content hit limits in each of the cases. This not only raises the question of the appropriate ambitions for philosophy, but under what conditions these ambitions have changed.”

An oft-repeated accusation against philosophy is that it’s useless as a mechanism for teaching morals. Is that criticism fair?
“There is no mechanism, philosophical or otherwise, that can be used by itself to teach morals. To the extent to which they have been concerned with the good life, what philosophers have traditionally tried to do is to present an image of what it would look like to live well, and to offer a means of getting to that state.

“A major problem in classical antiquity was that the image provided by classical Greek philosophers, Plato and Aristotle, no longer seemed relevant outside the context of a largely self-contained city-state.

“At the same time, such accounts had been modelled on aristocratic behaviour; it’s far from clear that slaves could aspire to the kind of good life proposed, for example. Accordingly, with the move to modern democratic societies, another approach of philosophers – for example Kant, or JS Mill – has been to ignore considerations of individual virtue and focus instead on the rules binding on everyone in such a way as to meet the demands of equality.

“The general idea here has been to specify how to act in a way that you would expect others to act in the same circumstances. How effectively this can be used in teaching morality depends on how well one considers it captures moral psychology: that is, whether it matches how we actually reason when we come to a moral judgment. This is where the main problems have arisen.”

Are philosophers these days more concerned with novelty than wisdom?
“One always wants to go beyond what has already been achieved, but this is different from the search for novelty in some recent French philosophy and particularly its Anglophone followers, who have drawn on disciplines such as cultural studies and psychoanalysis in an attempt to forge new forms of philosophy.

“In its more extreme forms, rational argumentation has been replaced by what are in effect forms of free association. This does not open new paths in philosophy, but is rather just word-spinning.”

Should philosophy be wary of becoming absorbed by other disciplines?

“Philosophy has got to take science seriously, but this is the opposite of a slavish adherence to what is typically a simplistic grasp of science. Part of the problem is that philosophers tend to take the axiomatic presentation in Russell’s and Whitehead’s Principia Mathematica as their model of a complete scientific theory – despite the fact that it would be hard to find a mathematician who has even read it, never mind used it in this way – and it has permeated everything from metaphysics to political theory.

“The basic idea, ultimately deriving from Kant and pursued in Russell and in Wittgenstein’s Tractatus, is that purely conceptual truths can yield a complete understanding: the empirical becomes ultimately just a manifestation of the conceptual. To the extent to which philosophy has been reduced to the role of defending and rationalising science, the rationalisation in which it engages is wholly inappropriate and counterproductive, making science a kind of manifestation of epistemology or logic.”

Question (courtesy of Abba): Without a song or a dance, what are we?

Nietzsche replies: “What trifles constitute happiness! The sound of a bagpipe. Without music life would be a mistake.”