In defence of realism: Idealists excite us but at what cost? 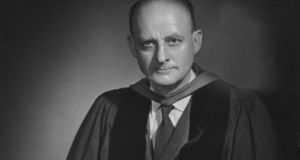 Why do idealists get all the kudos? Rebels and revolutionaries have statues in their honour, they’re worn on T-shirts and are held up as heroes. As for the realists, who has a poster of WT Cosgrave, John Major or Angela Merkel pinned up in their student digs – even though these are the sorts of characters who have been the backbone of our democracies?

Yes, it’s the relatively drab and ideologically hazy – the Joe Bidens of this world – who we call upon to clean up the mess created by dreamers and romantics. Idealists may shake things up but, to adapt a line of Alan Bennett’s, history is realists following behind with a bucket.

Perhaps the greatest champion of realism among political theorists was Reinhold Niebuhr. The American theological and social critic is credited with composing the Serenity Prayer, that paean to ancient wisdom which begins “God, grant me the serenity to accept the things I cannot change”. But his political message deserves similar fame, according to Dr Luke Cahill, lecturer in international relations at the University of Bath.

As we live in our respective echo chambers, we need Niebuhr now more than ever

Niebuhr advocates that we should act with humility and caution on the grounds that humans are inherently flawed, utopia will never be achieved, and the road to unintended consequences is paved with good intentions. “This was not an excuse to accept the status quo, but at the same time he rejected simplistic notions of progress,” Cahill explains.

Barack Obama described Niebuhr as his favourite philosopher, and Cahill is researching how the theologian influenced some of the 44th US president’s major foreign policy actions. The man who will be the 46th US president seems to have absorbed some of Niebuhr by osmosis. His campaign cry “I will be an ally of the light, not the darkness” riffs off Niebuhr’s signature metaphor.

To Niebuhr, we are all capable of sin but the “children of light” can maintain the upper hand, and protect democracy, if they avoid starry-eyed thinking and acquire some of the wisdom of the children of darkness.

Why is Niebuhr the right thinker for today?

Luke Cahill: “In a now famous 2007 interview in the New York Times, then-senator Barack Obama praised Reinhold Niebuhr. ‘I take away the compelling idea that there’s serious evil in the world, and hardship and pain. And we should be humble and modest in our belief we can eliminate those things. But we shouldn’t use that as an excuse for cynicism and inaction.’

“In these few lines, Obama neatly summarised why we need Niebuhr now more than ever. In a world of political and economic extremes, of quick fixes and social media, few public figures have a sense of the limitations. They promise simple solutions to complex problems. Using a Niebuhrian framework, they should be stressing how what they can do may help the issue, not resolve it.

“Niebuhr was not afraid to change his mind and did so throughout his life. He was a believer in the liberal Social Gospel at the beginning the 20th century. After the first World War he became a tepid pacificist, a ‘Marxian’ and eventually reluctant follower of Franklin Roosevelt’s New Deal.

“As the cold war began, he opposed communism and was labelled by some as a ‘Cold War warrior’. Yet even this label did not fit easily. He spoke out against the Vietnam War as American involvement increased.

“Fundamental to this is not just the ability to change his mind but the sense of doubt he held that led him to these various, and varied, positions... As we live in our respective echo chambers, we need Niebuhr now more than ever.”

“The Children of Light and the Children of Darkness, crucially subtitled A Vindication of Democracy and a Critique of its Traditional Defence, was written during the second World War.

“For Niebuhr, the children of light were those liberals like his contemporary John Dewey. He criticised Dewey for his belief in the triumph of liberal reason, how every problem can be solved through reasoned, and reasonable, debate.

“Niebuhr excoriated those who thought that the divergence between self-interest and the general interest could be easily resolved. Conversely, Niebuhr warned how the children of darkness were aware of power and self-interest. He gave examples such as Machiavelli and Hobbes. He criticised the latter as having a ‘purely pessimistic analysis of man’s nature’.

“Modern comparisons are difficult. It is perhaps easier to see who the children of darkness might be, those who understand self-interest and the will to power: Viktor Orbán, Jair Bolsonaro. It is harder to clearly see who the contemporary children of light are. Jacinda Ardern, [UN secretary general] António Guterres, Nicola Sturgeon?

“Are they pretending to be children of light but acting like children of darkness in ultimate defence of democracy, as he recommends? Or are they the naïve optimists with a belief in man’s ultimate goodness that he warns us against? We cannot know at this time.

“Niebuhr suggests that Christian hope is needed to fulfil ‘the highest human striving’ but without this we alternate between ‘sentimentality and despair; trusting human powers too much in one moment and losing all faith in the meaning of life when we discover the limits of human possibilities’.”

Can Niebuhr really be a unifying figure when he insists at heart on a Christian outlook?

“His own beliefs were complicated, to say the least. Though he was a minister of the German Evangelical Synod of North America, he could not be called an orthodox theologian. He believed in the meaningfulness of life and how God would have the final word. Yet, a biographer has suggested how Niebuhr’s faith is closer to that of Nietzsche’s striving for human excellence.

“Moreover, Niebuhr seemed to doubt core Christian tenets such as transforming the world, as well as the Incarnation [the idea that the son of God was ‘made flesh’ in Jesus]. So, Niebuhr’s Christianity is not the Christianity that many think they know. One friend of his called him a ‘Platonist’. Consequently, he has a broader appeal.”

Niebuhr argues we must make do with “proximate justice”, but is it reasonable to ask people who are oppressed or discriminated against to accept that?

“It is unlikely that Niebuhr would accept the premise. It is doubtful that he would simply accept oppression and discrimination. Yet he would have probably been aware what Jesus said, ‘The poor you will always have with you’. So Lyndon Johnson’s 1960s plans for a War on Poverty would perhaps have been met with support, but ultimate scepticism.”

Where would Niebuhr stand on the political spectrum in the US, or in Ireland, today?

“Niebuhr is hard to equate with a single party or ideology today. Ultimately, he may be politically homeless. In the 1920s he was close to the British Labour Party, seeing it as embodying noble elements of the mixing of religion and politics.

“At various times he admired the US progressive and socialist parties. Yet, as time passed he would later deride politicians, some on the left, for their naivete, hubristic faith in reason and not understanding human nature.

“Niebuhr might be on the broad left, seeking justice and equality. Yet, as ever, he would be wary of grand promises to end injustice or eradicate suffering. He may also have found an uneasy home in the classical conservativism of Burke, Scruton or Oakeshott, where prudent reform is framed through a sense of limitations.”

Reinhold Niebuhr replies: “The final wisdom of life requires not the annulment of incongruity but the achievement of serenity within and above it.”