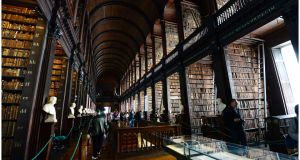 Four new sculptures of female scholars are to be commissioned by Trinity College Dublin, the first women to go on display in the university’s Old Library .

Scientist Rosalind Franklin, folklorist and theatre-founder Augusta Gregory, mathematician Ada Lovelace and writer and women’s rights advocate Mary Wollstonecraft have been chosen from a list of more than 500 suggestions.

The sculptures are the first to be commissioned for the Long Room of the Old Library in more than 100 years. There are currently 40 marble busts in the space, all of which are men.

In a statement on Thursday, the college said it recognises that its public spaces “must better represent our diversity” and that “it has decided as a first step to introduce a series of sculptures of women”.

“This is the first time in over a century that the university has commissioned new sculptures for this prestigious location,” it said.

Trinity students, staff and alumni were invited to make nominations for new sculpture busts at the end of last year. The subjects had to be scholars and no longer living. They did not need to be graduates of the university and there was no restriction as to nationality.

Dr Patrick Prendergast, Provost of Trinity College said the Long Room is “one of the most magnificent rooms in the world, visited by hundreds of thousands of people most years”.

“I welcome this initiative as a step towards reflecting the university’s diversity in such a nationally significant location,” he said.

Helen Shenton, librarian and college archivist, said: “As the first woman librarian in the college’s 428-year history, I am especially delighted to champion this initiative to address the historic inequity in the Long Room.”

Rosalind Franklin’s work generated key measurements for one of the most transformative advances of the 20th century, uncovering the structure of DNA.

Her later work had an equally pivotal impact on revealing the structure of RNA viruses, including early work on the Polio virus.

Her work as a writer, dramatist, theatre-founder and champion of the Irish language helped define and give rise to cultural nationalism in the years leading up to, and after, the establishment of the Irish Free State.

Augusta Ada King, Countess of Lovelace, was the author of an 1843 monograph on Charles Babbage’s design for the first analytical engine (general-purpose computer). She published the first recognition of the capacity of a computer to make logical deductions about both numerical and non-numerical objects.

Mary Wollstonecraft was a women’s rights advocate and author of A Vindication of the Rights of Women (1792).

She argued that women must be allowed to be educated and to contribute equally to society, stating in A Vindication, “my main argument is built on this simple principle, that if she be not prepared by education to become the companion of man, she will stop the progress of knowledge and virtue”.

Trinity will be seeking to avoid the sort of controversy that accompanied the unveiling of a statue of Wollstonecraft in London earlier this month. The nude monument has sparked a crowdfunding campaign for a more “dignified” tribute.

Critics of the sculpture by renowned artist Maggi Hambling have repeatedly covered it in clothes since its unveiling in London last week, calling it an insult to the memory of the “mother of feminism”. Hambling said her sculpture of a naked “Everywoman” emerging from an abstract form of intermingled female figures was meant to reflect Wollstonecraft’s spirit rather than depict her likeness.