Irish traditional music festival in Drogheda is planet’s largest with some 10,000 participants 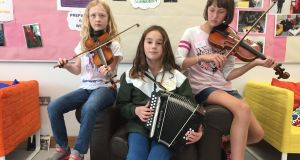 Delainey Schwarz, 8, Bella Burnwell, 10 and Emma Strong, 11, from Chicago, are among 10,000 musicians participating in the Fleadh Cheoil in Drogheda this week. Photograph: Lara Marlowe

The presence of an estimated 400,000 visitors in Drogheda this week, nearly one third of them foreign, is testimony to the global reach of Irish traditional music.

The Fleadh Cheoil na hÉireann, in Drogheda until August 19th, is the biggest festival of any kind in Ireland, and the planet’s largest traditional music festival. Up to 10,000 musicians and singers are participating.

The Fleadh has been organised by Comhaltas Ceoltóirí Éireann (CCE) every year since 1951. With 420 branches on five continents, and upwards of 35,000 members, the CCÉ is probably the single most effective purveyor of Irish culture.

“It’s the obscure places, the branches in Sardinia, Moscow and St Petersburg, that surprise you,” says Jim McAlister, the reachtaire or director of CCÉ. “We have a fluent Irish-speaker called Yuri in Moscow, and Mohamed in London is a Sean Nós singer As Gaeilge who’ll perform on Saturday night. Neither of them has any Irish parentage.”

Kieran Hanrahan is the director of Scoil Éigse, the music summer school that is part of the Fleadh. He is also a banjo player with Stockton’s Wing, the group that has reformed for a one-off performance for the first time in decades, and the presenter of RTÉ Radio 1’s Céilí House programme every Saturday evening. “It’s the basic rhythm of the music” that attracts people, he says. “A bit of drive and lift. It covers all emotions.”

Kell Chole is global director of sales and marketing for a Chicago-based automotive company. She devotes her Saturdays to the Murphy Roche Irish Music Club and School of Irish Music, which she founded in the western suburbs of Chicago. Despite her Irish heritage, Chole describes herself as “pure Yank”. On business trips around the world, she contacts CCÉ chapters in cities as far-flung as Rome and Shanghai.

“The pleasure of playing music that is purely happy” is what attracts people to Irish music, Chole says. But some of us love mournful laments, I comment. “When you sign up to play Irish music, you’re looking for reels and jigs,” she replies.

“I start with kids as young as three and a half,” Chole says. “I might find a child in a pub, moving to the music, and I ask the parents to send them to me. If they can move to the music, they can play it.”

Daily classes at Scoil Éigse have just finished, and three of Chole’s students stage an impromptu concert in the hall of Ballymakenny College. Emma Strong, age 11, started playing the fiddle when she was 4. Delainey Schwarz, age 8, began fiddle lessons at 5. Both girls have been admitted to the Fleadh competition. Bella Barnwell, age 10, is a relative novice on the button accordion.

I ask the American girls why they devote so much time to practising Irish music. “It’s lively and it’s just fun to play,” says Emma. “I like participating in events in front of people and learning new tunes so some day I can have a lot of tunes and pass them on to other people,” says Bella. “I just like going to the competition,” Delainey replies.

Traditional music is bound up with the Irish language. When he opened the Fleadh in front of 10,000 people on August 12th, President Michael D Higgins stressed the importance of using the Irish language “no matter how few words you may have.”

“The language is one of the reasons the government helps CCÉ,” says McAlister. “It’s a less formal and more relaxed way of speaking Irish. When you start teaching grammar, we all find the same thing.”

“This is the first time the Fleadh has been held in the northeast,” Hanrahan says. Drogheda is capitalising on its success in securing the Fleadh next year as well, and the nearby discovery of a Megalithic passage tomb last month, to claim the title of “cultural capital of Ireland’s Ancient East”.

Taxi drivers complain that the closure of the town centre has created traffic chaos. Some Fleadh participants found it difficult to find lodging. Others are scandalised that hired bands are playing in the pubs at night. “Not the spirit of the Fleadh,” one says. The festival is the victim of its own success, organisers explain.

The largest Fleadh to date was held in Derry in 2013, when 450,000 attended. “Derry was the only Fleadh held in the six counties,” says McAlister. “I’m originally from Belfast. Once the Troubles started, there was always a potential security issue.”

“Even through the Troubles, there were Unionist Presbyterians from the Antrim and Derry Fiddlers’ Association playing in the Fleadh,” says Hanrahan.

McAlister insists that Brexit will have no effect on the cross-border nature of the Fleadh. “We were always a 32-county organisation, even when there was a border. Brexit may change trade and industry, but it shouldn’t affect culture.”