Christina Aguilera: What we know about her secret Dublin gig

Christina Aguilera sang for 2,200 guests of a US insurance firm in Dublin’s 3Arena 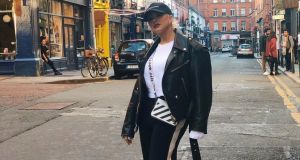 Five-time Grammy award winner Christina Aguilera was seen gracing the streets of Dublin this week. During her stay, Aguilera paid homage to her “Irish roots” by posting a picture on Dublin’s Drury Street to both her Instagram and Twitter accounts, setting Irish social media ablaze as fans speculated as to why she was visiting the nation’s capital.

The artist recently released her eighth studio album Liberation, her first in six years. However, she was in the city on business unrelated to her new release. Aguilera was here for a private performance for American insurance company Allstate in the 3Arena on Wednesday night.

The event took place in the venue’s main arena with a platform constructed on the second floor to facilitate the large volume of guests. The event was the largest indoor seated dinner with a concert. In between courses, Riverdance gave a short performance in preparation for the main attraction.

Guests polished off a gourmet meal catered by Eunice Power, before Aguilera took to the stage sometime after 9pm. Her performance lasted for about an hour.

The 2,240 guests were treated to the tracks Candyman, Dirrty, Ain’t No Other Man and Fighter as well as renditions of Moves like Jagger and Say Something. During the performance, Aguilera brought her two young children Max and Summer on stage to perform with her.

When @xtina brought her kids out on stage! So adorable, tons of fun! pic.twitter.com/3AvEWbX2CF

Christina Aguilera just posted this pic of her in Dublin? Looks like it was taken in the evening so maybe not from today but omg pic.twitter.com/yodjPr5cF9

Still in shock this happened tonight I’ve loved this woman since day 1 of her career & what she stands for she’s an icon & an inspiration more than she will ever know. @xtina thank you for talking & taken a pic with me tonight I love you ❤️#xtina #christinaaguilera #fighter pic.twitter.com/naoEZ03r5n

I can’t get over how sweet Xtina was to me ❤️ pic.twitter.com/RPjgCwSj5Y

Thanks to Christina Aguilera for performing for us! Had tons of fun! @xtina pic.twitter.com/wcspeWIxan

Guests were treated to dishes such as smoked salmon blinis, beetroot tart with marigold flowers, fillet of beef, monkfish with beurre blanc, lemon posset, strawberry tart and petit fours. It required 56 chefs, 12 kitchen porters, 230 floor staff and 230 of the arena’s bar staff to undertake the operation.

“The client said that it was the best event of this type that they’d ever done and they do them all over the world. The food was fab, but I have amazing teams with me” says Power.

Power regularly partners with the 3Arena, but even she was struck by the scale of this particular event. “We built 10 kitchens, nine downstairs and one upstairs” she said. Despite the pressure Power says: “It was so smooth the whole event. There wasn’t any glitch we couldn’t get over it.”

For the kitchen staff, Riverdance was the highlight of the evening. “For us, that was brilliant as well, because it kind of gave a boost of energy just before service,” she says.

Chef and owner of The Tannery Restaurant, Townhouse and Cookery School in Dungarvan Paul Flynn assisted Power at the event. “It was just a masterpiece of organisation,” he says. “There was an hour-and-a-half for them to be fed – now that in itself is a challenge. We are not talking about easy food. First of all, you’re cooking fillet steaks the room for error is quite high ..... it wasn’t just chicken curry”!

After the performance Aguilera is reported to have gotten a taste of Dublin’s nightlife at the Baggot Street nightclub and restaurant Xico.

She delighted fans throughout her brief stay by stopping to take pictures as she roamed the city streets.

Where did it all go wrong for Johnny Depp?
6