Brahms steals the show at the Kilkenny Arts Festival 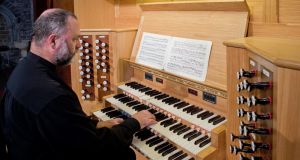 The big musical focus of Kilkenny Arts Festival is the chamber music of Brahms. Festival director Eugene Downes has found space for songs, choral music, organ music, and solo piano works. But trios, quartets, quintets and duo sonatas are the order of the day, with the strand continuing right up to the festival’s final day on Sunday 19th.

The sequence opened with a solo piano recital by Finghin Collins, who was tasked with playing a big programme — the two Rhapsodies, Op 79, and two late sets of piano pieces, Opp 118 and 119 — on a model B Steinway grand. This is the size that Steinway used to describe as a “Drawing Room Grand” as opposed to the company’s C and D models, designated respectively “Concert Grand” and “Orchestral Concert Grand”.

The model B, which is also unfortunately to be found in the National Concert Hall’s Kevin Barry Recital Room, is not short on volume. But the quality of the tone, particularly at either extreme of the keyboard when the instrument is played at full tilt, is simply not in the same league as that of the larger models. If there were no quality issue, there would simply be no reason for the largest and most expensive model to have become the de-facto standard in concert halls around the world.

What’s all this got to do with Brahms? Well, Brahms’s career saw many changes in the world of piano design and manufacture. So much so that the composer’s own allegiance changed from the instruments of the Viennese firm Streicher to the altogether more powerful Bechsteins and American Steinways, instruments that are much closer to the piano as we know it today.

He even wrote a request to the conductor Julius Bernuth before a concert in 1881: “Since I do have to trouble you about a grand piano, I ask if I will find a very good and powerful Bechstein (or American Steinway) waiting for me?” (the italics are Brahms’s). On another occasion he even offered to pay transportation costs out of his own pocket to have a Bechstein or Steinway to perform on.

Collins’s typically warm-hearted and intelligent accounts of the solo piano works were limited by the tonal resource of the instrument. And his two-day traversal of piano trios (Opp 8 and 101) and piano quartets (Opp 60 and 26) with members of the Irish Chamber Orchestra — violinist Katherine Hunka, cellist Christian Elliott and viola-player Cian Ó Dúill - marred by imbalances between keyboard and strings.

Simply put, Collins liaised with his partners in terms of ensemble. But at the same time he also dominated them to an extraordinary extent, playing as though Brahms’s string parts were really just secondary material. Some of the most glorious tunes were allowed to disappear behind webs of richly-arpeggiated piano patterns.

In the trios it was clear that Hunka and Elliott were also responsible because of their restraint. Things improved in the two piano quartets, with Cian Ó Dúil showing an ease in assertiveness that neither of his string colleagues consistently achieved. And the balances in the second programme, while still far from acceptable, were an improvement on those of the first.

The Irish Chamber Orchestra’s Later Beethoven programme on Friday paired Cork composer Sam Perkin’s Waves with an orchestral version, by Katherine Hunka and Christian Elliott, of Beethoven’s String Quartet in B flat, Op. 130. Perkin’s Waves (originally titled 365 Variations on a Gesture), is a work for percussion (Alex Petcu-Colan) and strings that explores the world of waves, sounds of which help the composer deal with the unpleasant auditory experiences he is subjected to because of tinnitus. The piece he’s written is at once literal and imaginative.

The performance of the Beethoven quartet extends the ICO’s obsession with arrangements, an obsession which is really hard to fathom when the original is so freely available. Their playing was expertly disciplined, but not on any level a match for what this music can amount to when played by just four strings. The best explanation I can muster is that their fixation on arrangements is like Hollywood’s ongoing fondness for remakes. It may be unimaginative and dumb. But there’s still an audience for it.

The Akademie für Alte Musik Berlin took a night off from Monteverdi’s The Return of Ulysses on Saturday to present a programme titled Monteverdi’s Italy: The Rise of Instrumental Music.

Apart from the persuasive presentation of much that was odd and quirky, there were cunning juxtapositions

Earlier this year The Irish Times’ consumer affairs correspondent Conor Pope wrote about nostalgia and the 1980s and offered a list of some of the things we didn’t have back then. Most of the composers in the Akademie für Alte Musik’s programme would fit comfortably into that category — Bertali, Uccellini, Caccini, Falconieri, Valentnini, Pandolfi Mealli, Marini, Legrenzi, Ferrari — with just Monteverdi and Biber standing apart as much better known.

What was the big post-1980s change? Well the upheaval of the period instruments movement delivered a new generation of players with the interest and the specialised skills to make full sense of music that had been neglected and possibly misunderstood for centuries.

The German ensemble, which drew in two musicians from Ireland, Malcolm Proud on harpsichord and organ and Siobhán Armstrong on harp, offered an evening that was a delight from start to finish.

Apart from the persuasive presentation of much that was odd and quirky, there were cunning juxtapositions. For example, the genuinely weird chromaticism of Valentini’s Sonata à 5 in G minor was advantageously placed after the relative certainties of a Pascalle à 3 by Falconieri.

And there was even a thoroughly old-fashioned build-up in the second half, with the pieces by Monteverdi himself and Biber functioning as the climax.

Donald Trump: ‘You meet a woman. In one second, you know whether it’s going to happen’
8