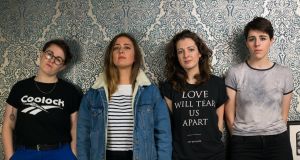 Diversity is a wonderful thing, as the multifaceted Irish music scene can prove. It wasn’t always so, of course. And we are also only too aware that music forms and styles are cyclical – what is popular today can have little or no relevance tomorrow.

It has always been like this and will continue to be so. The noticeable aspect of the current state of Irish music, which has never been in such vibrant, rude or obstinate health, is its equally stubborn adherence to quality control. It wasn’t always this way, either.

There was a time, not that long ago, when sloppiness too often equated to a “sure, it’ll be grand” approach, when artifice buried realism. The difference between then and now is not so much refreshed vigour as a renewed sense of purpose influenced in the main by socio-political issues, personal experience, cultural mores and the benefits of celebrating individuality.

No matter whether it simmers or boils over, anger is an energy. And if you’re on the lookout for a bunch of Irish bands from the current bumper crop that typifies such commitment, then you could do much worse than grab a ticket to the Seoda Summer Party, which takes place this evening at Dolan’s Warehouse, Limerick.

Hosted by Seoda Shows, a Limerick-based unit that promotes “concerts, shows, shindigs and shenanigans” for people who like their music fringed with imaginative edges, this particular summer jamboree is, in essence, a tear-out-and-keep guide to what’s happening in the more jagged areas of Irish music. The heft of nominal headliners Fontaines D.C. (more about which anon) is shouldered by bands that are either fast establishing themselves or well on the way to getting there.

The former include Pillow Queens, a band that has recently been described in these pages (by Una Mullally) as “gimmick free, hardworking and with an authenticity marketers would kill for . . .” Another act sticking its head over the parapet and not getting popped at is Slow Riot, a post-punk band that fuses the barb-wire pop of the Jesus & Mary Chain with the burned intensity of Interpol.

Newer acts such as PowPig, Melts, and Fonda kick start the evening. In line with Pillow Queens, the PowPig ladies deliver a blend of bruising riffs and tuneful punk that make you want to run away with it. Psych rock group Melts comprise experienced musicians formerly in bands such The North Sea, Ghost Estates, The Things and The Mighty Stef. That fine new music arrives from musicians who were once members of acclaimed acts (each of which released valued albums) is a reminder that while best-laid plans don’t always work out, commitment and dedication will always find a way.

Fonda, meanwhile, is a garage rock trio that knows the difference between a tune and a racket,and which often combines the two to great effect. Special guest on the night is Berlin-based musician and songwriter Candice Gordon, who has strong connections with the Irish alt-rock community

Which brings us to Fontaines D.C. This is a band that has developed tenfold since their early gigs during Dingle’s Other Voices Music Trail about 18 months ago. Back then, in a corner of a small pub, they were elbow angular, eager awkward, delivering tenacious songs that rippled with bits of The Fall and pieces of Joy Division.

At a more recent sighting, at last week’s Indiependence Festival, on a much bigger stage, it is obvious that Fontaines D.C. has progressed to the point where they will easily step up to the mark. That they will smear and verbally abuse that mark, and then move on to bigger and better things, is only right.