The best jazz gigs to attend this week 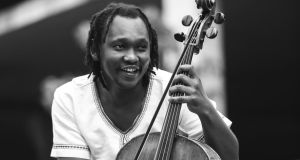 South African cellist Abel Selaocoe is one of the headliners in the Spike Cello Festival, which runs in venues around Dublin city from Friday 7th to Sunday 9th. Details from spikecellofest.com

The Dirty Jazz Club session at Arthurs on the first Saturday of every month is one of the city’s most popular jazz residencies, and there’s a good reason for that. The talented group – drummer Conor Murray, keyboardist Darragh O’Kelly, bassist Derek Whyte, trumpeter Bill Blackmore, trombonist Colm O’Hara, saxophonist Cathal Roche – have been playing together for years, so there is a level of understanding and empathy in the group that means they can take well-loved tunes by Miles Davis, Joe Zawinul and others and make them their own. It’s the sort of long-running residency that people will nod sagely about in years to come and say they were there, even if they weren’t. Claim the high ground in that future conversation by, y’know, actually going.

Since his death in 1974, successive generations of jazz musicians have been excavating the music of the great Duke Ellington and proving that there is still plenty of road left in the Ellington journey. Re:Ellington is a collaborative project featuring six of the Irish scene’s most accomplished improvisers – clarinettist Matt Berrill, saxophonist Nick Roth, trombonist Paul Dunlea, pianist Greg Felton, bassist Derek Whyte and drummer Matthew Jacobson – who have each re-arranged or entirely re-imagined an Ellington composition for the group. Interwoven with fragments of interviews with the great composer, the set includes lesser played Ellingtonia like Afrique and African Flower, as well as favourites like I’m Beginning to See the Light and Caravan. Bands with three horns, particularly of this quality, are rare on Dublin stages, and there will be plenty here to delight both Ellington fans and those with more contemporary tastes.

Zandra Mitchell, born in Phibsborough in 1903, was Ireland’s first international jazz star, touring Europe in the 1920s, appearing on the same stage as Coleman Hawkins and Django Reinhardt, and even leading her own band, Baby Mitchell and her Original Queens of Jazz, in Berlin during the 1930s. Roseanne Lynch’s musical theatre work, reclaiming this largely forgotten star of Irish jazz, sold out its seven show run at Smock Alley last November, so here’s another chance – two in fact – to catch Zandra, Queen of Jazz, directed by Katherine Soloviev with music by Richard Lennon.

Delicate, unwieldy, and hard to drag upstairs, the harp is the rarest of instruments in jazz. Still, US pioneers like Dorothy Ashby and Alice Coltrane found space in the devil’s music for the instrument of the angels back in the 1960s, and there are a few contemporary exponents, notably Colombian harpist Edmar Casteneda, who played a Music Network tour back in 2013. It must have gone well because Music Network are back with a 10-date tour from another jazz harpist, Alina Bzhezhinska. Based in London, Bzhezhinska has been winning praise recently for her work in reclaiming the music of Alice Coltrane. She lands in Ireland this week with her own powerful quartet that features saxophonist Tony Kofi, bassist Larry Bartley and drummer Joel Prime.

Iron City
Arthurs, Dublin, arthurspub.ie
Guitarist Shane Latimer is one of the Dublin scene’s most intrepid musicians, a sonic pioneer whose musical journey has taken him to the edges of abstraction. A member of Dublin electro-jazz hipsters OKO and co-founder of the Bottlenote festival, Latimer has latterly been performed his absorbing solo show internationally, blending his guitar with electronic glitchscapes and live sound processing. But when he moved house recently, the guitarist rediscovered the records that started him down the jazz guitar road in the first place by artists like Grant Green, Kenny Burrell and Jimmy Ponder, and he decided he needed to reconnect with what he calls “the organ funky stuff” that had originally inspired him. The muscular new band that he has assembled to help him – named for a lesser known Grant Green album – includes some of the funkiest, most fearless players on the Dublin scene, including keyboardist Darragh O’Kelly, saxophonist Nick Roth, bassist Sean Maynard-Smith and drummer Brendan Doherty.

The fact that it can be listed here under the j-word is evidence enough of the reach and ambition of the Spike Cello Festival, now in its fourth year. Programmed by Irish cello evangelists Lioba Petri and Mary Barnecut, Spike is a daring bid for genre freedom for this gorgeous instrument, filling the city over the weekend with music that defies category and challenges hidebound notions about the role of the cello in contemporary creative music. The three main evening concerts in Lost Lane feature the extraordinary South African cellist Abel Selaocoe plus Celtic cellist Clíodhna Ní Aodáin (Friday); experimental Icelandic cellist Gyða Valtýsdóttir and her band plus Kate Ellis & Caimin Gilmore performing a new piece by composer Sam Perkin (Saturday); and a one-off cello formation of Dublin ensemble Glasshouse plus Two Versus featuring Belfast vocalist Suzanne Savage and New Zealand cellist Hugo Smit (Sunday). There are also various workshops (including one on improvisation from Selaocoe on Saturday afternoon), events for children in Temple Bar’s Ark, yocella (yoga and live cello, I kid you not), and a series of free performances in the Hugh Lane Gallery on Sunday, including a noon performance by principle cellist with the Irish Chamber Orchestra, Christian Elliott. Full details on the festival’s excellent website.

Pianist Jim Doherty and guitarist Nigel Mooney are two of the most senior old-school players on the Irish jazz scene, lovers of swing and keepers of the be-bop flame. Doherty, in particular, is a central figure in Irish jazz history, whose long association with the legendary Louis Stewart began when he auditioned the guitarist for his first ever gig in 1960 and only ended when the two old friends recorded an album together, just months before the great guitarist’s death in 2016. This week, Mooney joins Doherty’s longstanding trio with eminent bassist Dave Fleming and classy drummer Myles Drennan for a lunchtime concert in the John Field Room on Friday. Then Doherty returns the favour in Arthur’s on Saturday night joining Mooney’s own next generation rhythm section of bassist Barry Donohue and drummer Dominic Mullan.

The Dublin Jazz Co-Op operates a rolling curator policy and the current programmer of this intimate salon of the new is American-born composer and musician Ethan Edwards. Edwards’ own music inhabits the space where improvisation and composition meet – a space he calls the “halocline” of music (look it up) – and he offers no apologies for pushing the Co-Op’s curatorial envelope a little further this Sunday with Sonas, a classical duo featuring cellist Davide Forti and pianist Francesca De Nardi. As well as pieces by Stradella and Xenakis, the award-winning duo will perform new works by Edwards himself and by leading Irish jazz composer Ronan Guilfoyle. So go on, dip a toe in the halocline (seriously, look it up).