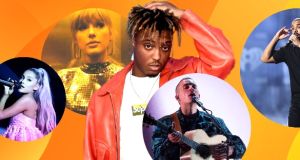 The late rapper Juice WRLD has been named most streamed artist of the year among Spotify listeners in Ireland. He is followed by Drake, Dubliner Dermot Kennedy, Taylor Swift and Ariana Grande.

The most streamed track of the year in Ireland is Blinding Lights by The Weeknd, Spotify has revealed. Roses (Imanbek Remix) by Imanbek and SAINt JHN, Rockstar by DaBaby and Roddy Ricch, Before You Go by Lewis Capaldi and Head & Heart by Joel Corry featuring MNEK complete the top five.

Dermot Kennedy’s Without Fear is the most streamed album of 2020 on Spotify Ireland. It is followed by Lewis Capaldi’s Divinely Uninspired to a Hellish Extent, Harry Styles’s Fine Line, Future Nostalgia by Dua Lipa and After Hours by The Weeknd.

Spotify has more than 600,000 paid subscribers in Ireland, while upwards of 1.3 million people are thought to have used its free, ad-funded service at some point. The company has recently expanded aggressively into podcasting, and here Irish talent showed strongly through 2020. The 2 Johnnies Podcast is at number, ahead of the Joe Rogan Experience, the Blindboy Podcast, The Laughs of the Your Life with Doireann Garrihy and The David McWilliams Podcast.

The most streamed artist globally in 2020 was Puerto Rican rapper Bad Bunny, with 8.3 billion plays. He was followed by Drake, J Balvin, Juice WRLD and The Weeknd. And most streamed albums of 2020 around the world were YHLQMDLG by Bad Bunny, After Hours by The Weeknd, Hollywood’s Bleeding by Post Malone, Fine Line by Harry Styles and Future Nostalgia by Dua Lipa.

The most streamed tracks internationally are Blinding Lights by The Weeknd, Dance Monkey by Tones and I, The Box by Roddy Ricch, Roses (Imanbek Remix) by Imanbek and SAINt JHN and Don’t Start Now by Dua Lipa.

The world’s most popular podcasts were the Joe Rogan Experience, TED Talks Daily, The Daily from the New York Times, The Michelle Obama Podcast, and Call Her Daddy by Alex Cooper and the Daddy Gang.

Spotify has faced criticism from artists who claim its royalty payments for streams are inadequate and that they disproportionately benefit mega-stars while the majority of musicians struggle to earn a living.

Guy Garvey, of the Manchester rock band Elbow, said on Monday that Spotify’s €9.99 subscription charge was too low and that fans would have to pay more so that musicians could survive.

“The big picture is that [€10] a month for access to all music is too little,” he told the Guardian. “Everyone feels a little bit guilty for having access to all this music for f**k all. It’s not sustainable and the emergency is we’re losing artists because they’re demoralised and they can’t afford to live... People don’t realise that their artists don’t get their cash and that needs fixing.”

Such criticisms aren’t new. As far back as 2012, U2’s then manager Paul McGuinness hit out at the company’s “lack of transparency”. He said: “Spotify has yet to become popular with artists because artists don’t see the financial benefit. That’s partly the fault of the labels because labels partly-own Spotify, and there is insufficient transparency.”

However, younger artists often have a different perspective. In 2018, Dermot Kennedy revealed that he had emailed Spotify chief executive Daniel Ek to personally thank him for the company’s support. “I know people complain about Spotify and what they pay, but when you go from playing in the street to making enough money to be able to live off music, it seems like a lot,” he told GQ.

Spotify itself has started to push back against claims it is short-changing artists. In an interview in August, Ek said: “It’s quite interesting that while the overall [revenue] pie is growing, and more and more people can partake in that pie, we tend to focus on a very limited set of artists,” referring to those who were grumbling about their royalties. “I don’t think I’ve ever seen a single artist saying, ‘I’m happy with all the money I’m getting from streaming’.”

Covid-19 and a year of lockdowns have boosted audiences for Spotify and other streamers. In September, research by marketing group Core revealed that 38 per cent of 1,000 surveyed adults in Ireland had tried at least one streaming service for the first time since the Coronavirus outbreak.

One-third of the adult population – roughly one million people – have listened to podcasts, it also found. Half of those had taken up the habit since the first lockdown in March.

Most Popular Podcasts
1. The 2 Johnnies Podcast
2. The Joe Rogan Experience
3. The Blindboy Podcast
4. The Laughs of Your Life with Doireann Garrihy
5. The David McWilliams Podcast

Most Streamed Tracks
1. Blinding Lights by The Weeknd
2. Dance Monkey by Tones and I
3. The Box by Roddy Ricch
4. Roses (Imanbek Remix) by Imanbek and SAINt JHN
5. Don’t Start Now by Dua Lipa