The classics are back in the charts even earlier than usual. So why not discover these lesser-known festive bangers? 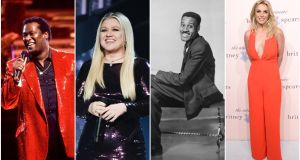 Judging by the number of trees and lights going up already, we seem to be rounding off the worst year ever by turning Christmas 2020 into a six-week celebration of successful vaccine trials. Sure enough, sales and streams of festive songs are up by 50 per cent compared with the same week last year, with Mariah Carey leading the charge. But to avoid being thoroughly sick of All I Want for Christmas Is You before you have even opened an Advent calendar, consider adding these lesser-known tracks to your playlists.

Luther Vandross – The Mistletoe Jam (Everybody Kiss Somebody).
Vandross powerfully emanates the warmth and earnestness of Christmas – he is the perfect accompaniment to a four-Baileys high with the heating on full. His 1995 album This Is Christmas features a beautiful take on Have Yourself a Merry Little Christmas – it vies with the Judy Garland and Frank Sinatra takes for the title of definitive version – plus excellent originals, such as the piano ballad With a Christmas Heart and The Mistletoe Jam, a frisky funk number with the come-on: “Glad you got big legs / ‘Cause they’re so good when we’re romancing.” Listen here

Britney Spears – My Only Wish (This Year)
What with the sheer volume of classics from the glam rock era and before, it is tough to make a new Christmas song break through, but this effort from Spears has doggedly made its way into the canon. In it, she pleads with Santa for a boyfriend; that heartbreaking minor chord change in the chorus will surely convince him to deliver a hunk down the chimney. Listen here

Kelly Clarkson – Underneath the Tree
The X Factor enforced a brutal secularisation in the Christmas charts, its almost unshakeable grip on the Christmas No 1 between 2005 and 2015 preventing wonderfully festive songs such as this from getting the attention they deserved. Thankfully, Clarkson’s 2013 song is becoming a perennial. It bounces like a five-year-old on their parents bed at 5am on Christmas morning – if you attempt to play the sleigh bells along with it, you will need a protein shake to help your triceps recover. Listen here

John Fahey – Christ’s Saints of God Fantasy
If you are the sort of person who likes Christmas, but not in a 2,000-calories-before-11am-then-a-fight-about-immigration-policy-with-your-stepdad sort of way, this beautiful 10-minute suite of solo guitar ruminations may be the thing for you: as cleanly beautiful as a robin’s footprints on a winter morning. Listen here

Kanye West – Christmas in Harlem (feat Teyana Taylor and CyHi the Prynce).
The greatest piece of Christmas rapping sees West loosening up for the holidays, doing his shopping last minute and being an endearingly sleazy Santa getting sloshed on eggnog with his girlfriend. Taylor’s sublime chorus never fails to make the heart twinkle. Listen here

Leroy Carr – Christmas in Jail – Ain’t That a Pain?
The 1929 recording by the bluesman sees him longing for turkey and a Christmas tree in his cell and bail money as a present, but the melodiousness of his lament suggests even he has a glimmer of Christmas sparkle. Listen here.

Jesu – Christmas (Life Mass)
Christmas, a 2010 doom-shoegaze track by Justin Broadrick under his Jesu guise, becomes sublime in this 2018 live version for a fashion show in a Paris church: a carol of sorts, with 12 minutes of beautifully chiming and shredding guitars instead of choirboys. Listen here

Cotton Top Mountain Sanctified Singers – Christ Was Born on Christmas Morn
Recorded in 1929 and led by the vaudeville comedian Frankie “Half Pint” Jaxon, this jazz-gospel crossover may sound like it was taped from the far end of an AM radio dial, but its wildly catchy melody burns through the scuffs and scratches. Listen here

Courtney Barnett – Boxing Day Blues (Revisited)
A loping, moping tune that is devoid of Christmas cheer, but still has a little spring in its step. The Australian indie star sings of a horribly uneven relationship, in which one person cares too much and the other not at all: “Like a Christmas tree on Boxing Day, thrown away / Why don’t you feel for me any more?” If everywhere you turn there are bubbled couples smooching while you are social distancing, this is one to put on headphones and kick dead leaves to. Listen here

Low – Some Hearts (At Christmas Time)
Making the greatest Christmas song of the past 20 years is commendable; making the second-greatest is just showing off. The Duluth, Minnesota, band’s quietly rollicking masterpiece Just Like Christmas has rightly become well known and squares nicely with the jollity of the season. This 2016 follow-up is very different: a percussion-free ballad with Mimi Parker singing, as if with a consoling hand on yours: “Some hearts will break at Christmas time.” Her melody is as pure, glistening and open as a snowbound prairie and pricks my eyes with tears every time I hear it. Christmas can be tough, and this year it will be newly and especially so for many; let’s heed Parker’s words. Listen here – Guardian

Which are your favourite overlooked Christmas songs? Share them in the comments below