The singer-songwriter on BLM protests, his latest record and swift rise to fame 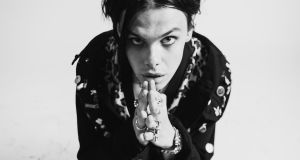 Dominic Richard Harrison took on the alter-ego of Yungblud after it was suggested that he should appear on reality series The Voice.

One afternoon last summer Dominic Richard Harrison found himself standing on a street corner in Los Angeles trying not to have his head kicked in.

“It was ‘white people to the front’,” he says. “We were on the frontline because if you’re white the police are less likely to shoot you, less likely to hit you with a f**king baton.”

Harrison – better known to his millions of fans as gender-ambivalent pop extrovert Yungblud – was at the Black Lives Matter protest in downtown LA. With him was Ashley Nicolette Frangipane, aka pop star Halsey, aka Harrison’s ex-girlfriend. Images later circulated on Twitter of the pair helping treat wounded protesters. Halsey had brought a first aid kit. Harrison (23) was wearing blue surgical gloves and what can only be described as “rock star trousers”: one leg white, the other black.

“We were getting shot at with rubber bullets and flash bangs,” he says. “It’s f**king crazy. What’s interesting for the UK, though, is what America has done. Young people and black people have voted Trump out. It’s inspiring.”

Yungblud fans have often interrupted his shows with mass chants of “F**k Boris Johnson”. This is obviously a bit of a departure. Can you imagine similar choruses going up at a Taylor Swift or Little Mix concert?

But then, Harrison doesn’t regard what he does as simply entertainment. He sees his music as a unifying force and a lightning rod for Gen Z’ers who’ve had enough of the old arguments, the old prejudices, the old ways of living.

One component of the success that has seen him notch up 8.6 million monthly Spotify plays is obviously his bouncy and irrepressible pop: imagine a gender-fluid Robbie Williams fronting early McFly. However, it isn’t the entire picture. He also feels that he represents something bigger than himself.

“My generation is over being divided,” he says. “Being divided is an old concept that is rapidly becoming obsolete. We are opinionated. We are full of contradictions. That’s the beauty of it. Our intention is to make this world equal. No matter what size you are,what shape you are, what colour you are, what sexuality you are.”

Harrison is at home in London, speaking into his Zoom camera against a fashionable backdrop of stripped-away industrial shelving. He is pale, with large expressive eyes and a huge, wobbling mass of dark hair that, throughout our conversation, threatens to take on a life of its own.

The subject at hand is his forthcoming second record, Weird!. It’s a zippy affair that skips breathlessly between hip-hop, emo-adjacent indie and TikTok-style pop-rock. A major influence on the project, he explains, was Amy Winehouse: not musically (his chirruping voice is a long way from Winehouse’s bluesy croon), but in the way he could sense her spirit with him in the studio.

Harrison is a contradiction, as the most interesting pop stars usually are. He is, at one level, extroversion personified. His music is a little like that, too: at moments on Weird! he sounds like one of the more talented members of One Direction covering The 1975.

Yet amid the playfulness are glimpses of darkness. It’s Quiet in Beverly Hills discusses the artificiality of fame; Love Song is about the screaming matches between his parents that he witnessed as a child in Doncaster. Elsewhere he delves into his break-up from Halsey – with whom he collaborated on his biggest hit, 11 Minutes – and his mother’s near-death in a crash.

“It has been the weirdest 18 months of my life,” he says. “I got famous really quickly. I nearly lost my mum in a car accident. I was in a public relationship. It was all over the internet. And I genuinely loved the girl, with all my heart. It didn’t work out in the end. That was one of the first times I’d ever felt love. It genuinely knocked me for six.”

Harrison describes himself as pansexual and has been wearing dresses long before Harry Styles ever thought of slipping into a frock. At the 2020 MTV Europe Music Awards on November 8th, he donned a white-netball skirt with angel wings and, playing the part of “Cupid”, flew around London Roundhouse on wires “shooting arrows at unsuspecting lovers”.

All his serious relationships have been with women, though. One of his exes, he reveals, was from north Cork. Perhaps that’s why he’s so chuffed at cultivating a huge Irish fanbase and going from performing in Whelan’s in March 2019 to – circumstances permitting – headlining the 3Arena in November 2021.

“I had a girlfriend from Fermoy,” he says, slipping into a surprisingly “day-cent” Cork accent. “Murphy’s Stout!,” he adds, slightly randomly. “She was actually from Rathcormac. But yeah, Ireland has been f**king barmy. We’re playing 3Arena and it’s almost sold out.”

Harrison has travelled quite a distance from Doncaster, where he was the only kid in his class into Marilyn Manson, Lou Reed and Vivienne Westwood. He was mocked for his extroverted dress style and for wearing make-up. The one place he didn’t get any grief was at home. His father is a vintage guitar dealer; grandfather Rick Harrison played with T-Rex. Rock ’n roll was in his blood.

“Doncaster was very set in its ways,” he says. “However, if it wasn’t for Doncaster I wouldn’t be where I am now. Pain puts things into perspective. It makes you realise very quickly what is right and wrong. I’m proud to be from Donny.”

Still, the bullying was relentless and he got out as soon as he could. He moved to London aged 16 and, his parents helping with the rent, enrolled at ArtsEd, an independent performing arts school. His spare time was spent busking outside his dad’s guitar dealership in Soho. With his big tunes and even bigger personality, he quickly attracted attention.

He sang in the chorus line of a West End run of Bugsy Malone and had a cameo in Emmerdale (the Yorkshire accent came in handy). In 2016 he starred in Disney tween drama The Lodge as Oz, “a singer and temporary love interest”. He quit after one season.

Occasionally he had the sense people were trying to manipulate him. At one point it was suggested he appear on revolving chair reality series The Voice, where it was felt his singing voice would impress will.i.am and the other judges. Frustrated and fearing he was starting to drift, he took on the alter-ego of Yungblud.The name came to him when he noticed he was his management company’s youngest client.

“People have been trying to put me in a box since I opened my eyes,” he says. “When I moved down to London they thought, ‘alright, he has got a bit of a button nose, he’s a bit rough around the edges. Why don’t you do The Voice?’ At the end of the day you’re 16 and you’re from the north of England. You kind of believe this s**t.”

Now he has made it, Harrison is able to look back with some fondness on that period of struggle and obscurity. He has especially warm memories of the months he and Lewis Capaldi were flatmates and made a serious dent in London’s supplies of Stella Artois. But there were moments of genuine struggle as well.

“I got lost for a bit. My guitar player and my drummer – all three of us lived in a two-bedroom flat. It had live wires on the walls. Legitimately – you touched one of the wires and ‘bang’. There was a bucket for the damp.”

Still, he toured and toured. And then BBC Leeds and west Yorkshire booked him for an acoustic show, which found its way to YouTube and got him noticed in the US. “And then it went mad. What the f**k! We got signed in America – bang.”

It has been non-stop ever since. “Drugs – I did a load of drugs,” he says. “Had sex with a load of people. On this album, I wanted to create a ‘neat whiskey’ story about life that tells you what we’re all going through. A story of gender, equality, identity, drugs, heartbreak and anxiety – all wrapped up in a coming-of-age, Skins series album.”

There is, Harrison says, “a lot of anger” on his 2018 debut 21st Century Liability. Weird! is different. It’s a celebration of how far he has come – and of the bond forged with fans, who have dubbed themselves the “Black Hearts Club” (named after the tattoos on two of his fingers).

“I’ve met kids on every continent of every colour, size, sexuality . . . everything. And they’ve told me stories that move me and make me question my whole existence. I’m not angry anymore. I have no anger in me. Obviously I’m frustrated still.

“But that anger is overshadowed by hope. I know we’re going to get to our goal in the end. Look at what happened in the United States [with Trump being booted out]. As Dylan said: ‘the times, they are a changin’.’ But in a f**king good way.”

Weird! is released on December 4th. Yungblud is due to play 3Arena on Saturday, November 20th, 2021