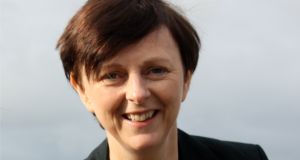 Elain Agnew on being a composer in Ireland: “There could have been more pathways, more support, more opportunities.”

Saturday, December 12th, is a black day for composer Elaine Agnew. It was the day she was finally supposed to see the first performance of her community opera Paper Boat, part of the classical-music programme for Galway 2020 European Capital of Culture.

The work, Galway’s first community opera, is the brainchild of Mark Duley, organist of the city’s St Nicholas’s Collegiate Church, which just happens to be celebrating its 700th anniversary in the same year as Galway’s big European culture bash.

His vision was to bring a new work into being in the spirit of Benjamin Britten’s Noye’s Fludde, a 1957 retelling of Noah’s Ark, that drew on the talents of professionals and amateurs, young and old. The Galway team includes poet Jessica Traynor, director Conor Hanratty and conductor Sinéad Hayes.

The original plan for three performances in mid-June was lost due to the first lockdown and the December performance would have been a slimmed-down livestream. Now, like most of Music for Galway’s 2020 plans – including the Cellisimo cello festival – it’s hovering, Cheshire-cat-like, in the imponderable, post-festive, pre-vaccine future most of us are contemplating for the early months of 2021.

If Agnew feels weighed down by the uncertainty, it doesn’t show when we meet up via Zoom, even when she has to correct me for making the elementary blunder of referring to Paper Boat in the past tense, something she lapses into later on.

She describes scouting for musical connections for the project. She had workshops in local schools with the goal of making a children’s chorus and mentions “two brilliant schools: Claddagh National School and St Nicholas’s National School”. She speaks warmly of the presence of enthusiastic teachers and of Mark Duley’s own choristers from St Nicholas’s Church. Add in the adult voices and you’re dealing with well over 100 singers.

The core of the professional instrumentalists is provided by the members of the ConTempo Quartet, Galway’s ensemble-in-residence, and amateur groups will be drawn in from around the county.

Agnew also followed a lead that took her to St Patrick’s Brass Band, “who have their own building, right beside the train station”. She sat in on one of their rehearsals and “talked to them about what I was intending to do and asked them if they would like to be involved. They all said: ‘Oh, absolutely! We’ve never played in an opera before.’”

But they did have some red lines of the kind that some composers might find intimidating. They cautioned her: “You have to be careful what keys you write in because there are certain keys we don’t like to play in,” and they were “not so sure about any of those irregular time signatures either,” though they were delighted to point out the special advantage they had of being experienced in walking and playing at the same time.

“They all played really well and had a great passion about what they do. When you work with musicians like that, you know they will give 100 per cent to you.” She speaks enthusiastically, too, about a group of “really young harpers” from Athenry.

The opera centres on “a young homeless man, a mysterious mother and her daughter who arrive in the church one evening, all seeking sanctuary from various threats. The mother and the child are seeking somewhere to call home. The homeless man also has a daughter from whom he is separated. The title comes from the fact that the quiet little girl makes paper boats.”

Agnew adds, “We haven’t got to the stage yet of working with the director so we haven’t made any paper boats yet.”

Community and education work has long been an important part of her career. “I’m not involved as much in the past two or three years,” she says, “I’m trying to step back from it a little because it can completely consume you. It’s quite exhausting work.

“I’m a great believer when you work in community or in healthcare or in education that you have to be the best that you can be. Especially when you’re working with people who aren’t musicians. They really deserve to have the best music experience. I would come back home and I would be absolutely wrecked afterwards. Then you have to find time to write too.”

For a number of years, she says, “I was more involved in the training side of things with Music Network and all the Music Generations, doing continuing professional development programmes for musicians. I used to do it in person, over weekends in Dublin. I’ve been doing it a bit recently via Zoom. They’re all at home with their instruments and I’m here in Belfast and I was able to do a two-hour training workshop with them. It was a bit strange but it kinda worked.”

'We’d have to rehearse it on Zoom and record it on Zoom!'

She says Zoom, for all its faults, is “a blessing, because you’re still able to do a certain amount of engaging with people. It’s nowhere near the real thing, not even a touch on it. But for the times that are in it, it’s brilliant that you can still continue.

“I’m doing a project at the moment with an organisation called Arts Care who promote arts and health and we’re doing it in partnership with RNIB [Royal National Institute of Blind People],  so I have a group of about 15 older adults with a whole range of visual impairment. We meet every other Monday via Zoom. When they’re singing, they all have to mute themselves because if we all sing and we can all hear each other, we’re all out of sync.”

It’s part of the nature of the technology but “it just sounds really mad. I’ve delivered them all a range of quiet percussion instruments in the hope that they can all unmute themselves and that we’ll work out some kind of a thing that they can play quietly together. They so relish being able to continue doing workshops.” And it’s a boon for them “that they’re doing it in their own homes, that they don’t have the obstacle of getting themselves from A to B”.

On the other hand, she says, “the craic and the energy are quite different. I always feel a bit deflated at the end.”

Agnew comes from a farming background in Co Antrim: “Our main income was potatoes and milk. We all grew up on a farm, running through fields.” She studied music at Queen’s University Belfast where her teachers included Kevin Volans. She also studied in Glasgow under James MacMillan. She has used the lockdown to sieve through her manuscripts and produce definitive versions of her work going back over three decades.

She tells me of the embarrassment of her earliest professional performances, having been part of a BBC documentary that included a clip of a player berating her for the number of errors in the score she had provided.

So, when Agnew looks back, has it been a good time to be a composer in Ireland? “It could have been better. There could have been more pathways, more support, more opportunities. Being involved with the community side of things obviously carries with it an income. If you were just living on commissions alone it would be difficult.

“The opportunities that I’ve had over the years – which include being RTÉ Lyric FM’s first composer-in-residence and a BBC Proms commission for James Galway with the combined forces of the Ulster Orchestra and Ulster Youth Orchestra – have often been things with more elements to them and have happened over a longer period of time. If those opportunities weren’t there, it would be tough enough.”

Her next big project is with Belfast’s Maiden Voyage Dance and choreographer Jennifer Rooney for the Belfast Children’s Festival. “We have four dancers, but because our performance is next March and we can’t guarantee to have live musicians, I’ve been asked to come up with a score that I can produce as a soundtrack so that the dancers can dance live in their squared-out boxes where they’re socially distanced. It was going to be a day-long event aimed at a family audience.

“I just like the idea of the music being performed by children. So I went to the Belfast Philharmonic Society, who have both a youth choir and a chamber choir, and asked if they would be up for learning and recording a choral piece with piano accompaniment. They went” – she sucks in her breath – “‘We’d have to rehearse it on Zoom and record it on Zoom!’” But the choir’s conductor, Lynsey Callaghan, thought it would be a great thing to do “once I bear in mind that it’s all going to be done on Zoom, recorded on their phones and I won’t hear it until it’s all done and dusted”.

Welcome to yet another dimension of the strange remoteness of the world of Covid-19. A final date for the twice-postponed Paper Boat is still awaited.