Silence is golden: Softly-softly approach to music gets your attention 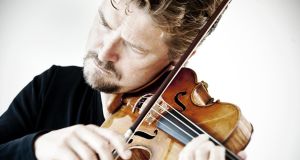 I got my first ever teaching job at the age of 17. I had honours Irish on my Leaving Certificate, and at the time this made me qualified to work as a substitute teacher in a national school. It wasn’t an easy assignment, and not just because of my age or lack of experience. Many of the children I taught were from a severely deprived background. They lived in the notorious Mountpleasant Buildings, where evicted tenants of Dublin Corporation were housed while they paid off their rent arrears. Documentary footage about the squalid, overcrowded conditions can be found on YouTube.

Before I started I made myself a sponge for advice and suggestions. It was just as well that I did. Discipline in the classroom was initially like something out of a Monty Python sketch, and I had to hold on blindly in order to survive. Three or four earlier substitutes, I was told, gave up after the first day.

Without help I wouldn’t have lasted very long. One of the great bits of advice I got was about managing disruption when it was at its worst. It was a counterintuitive approach. If there was any sort of riot going on, I was counselled, I could get attention by standing still at the front of the class and speaking so softly that no one would be able to make out what I was saying.

The kids’ curiosity would get the better of them, they would quieten down for a moment to hear me, and then I would have an opening in which I might manage to divert and hold their attention. Amazingly, it worked. They would start shushing each other in order to hear what I was on about. The advice came with a corollary, which I also took seriously. The technique would only work if it was rarely used.

The notion that quietness and reserve can command attention is also true when it comes to music-making. The great Romanian pianist Radu Lupu comes to mind as a perfect example, or French soprano Nathalie Dessay, whose 2015 National Concert Hall recital had moments of riveting quietness, or Catalan viola da gamba player Jordi Savall, whose delicacy in a packed Black Abbey at Kilkenny Arts Festival that same year made one want to hold one’s breath.

Sunday’s recital by the German violin and piano duo of Christian Tetzlaff and Lars Vogt presented one of the most extreme uses of surprise softness that I’ve ever heard. They used it all the time, but it worked. And it also turned one of the great distortions of virtuoso playing on its head or, rather, one of the main characteristics of what Stravinsky called “false” virtuosity. For him the false virtuoso was someone “who plays only 19th-century music, even when it is by Bach and Mozart” or, presumably, Stravinsky himself.

Tetzlaff and Vogt presented a programme that carefully balanced the 19th century (Beethoven’s Sonata in A Op 30 No 1 and Franck’s Sonata in A) and the 20th century (Shostakovich’s late Violin Sonata and György Kurtág’s Tre Pezzi, Op 14a). But theirs was not a 19th-century approach that was applied willy-nilly to the later music. Instead it was the micro-gestural style of the Kurtág – the recital’s most recent work, dating from 1979 – that was used as the lens through which to view all of the earlier music.

Violin and piano recitals are hardly the most in-your-face kind of presentations. But the probing inwardness of Tetzlaff and Vogt, which often amounted to understatement, was of an order that would make a typical violin and piano evening seem like a blockbuster movie by comparison. Of course, that also meant that when they let themselves go, as parts of the Shostakovich sonata unquestionably demanded, the effect was cataclysmic. And their pervasive lyrical gentleness in the Franck was utterly winning.

The early performance history of the Shostakovich is particularly well documented. The first public performance, given by David Oistrakh and Sviatoslav Richter at the Moscow Conservatory in May 1969 was recorded and has long been available on disc. But there are actually earlier Oistrakh performances. The great violinist played the work through with Shostakovich in the composer’s apartment in December 1968, and a recording of that has also been published. I have never come across a recording of the January 1969 performance given in private by Oistrakh and Mieczyslaw Weinberg for the Union of Soviet Composers.

Tetzlaff and Vogt are well removed from the manner of either of the two surviving early recordings. Oistrakh and the composer are essentially playing for each other, leaving the music to speak for itself. And the gravity of this very grave music is communicated by Oistrakh and Richter without the same level of personalisation employed by the Germans. But Tetzlaff and Vogt’s approach is undeniably the most striking of the three.

Incidentally, Oistrakh and Richter’s 1969 programme began with the same Beethoven violin sonata chosen by Tetzlaff and Vogt, and the Germans’ single encore, the third movement of Brahms’s Violin Sonata in D minor, Op 108, is from the other work that Oistrakh and Richter played. If this was not part of the plan, it was an extraordinary instance of serendipity.