As she explodes on to the stage, her current energy is as fierce as her past legacy 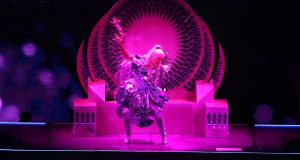 “A tawdry, tarty, cartoonlike version of female sexuality has become so ubiquitous, it no longer seems particular.” So wrote Ariel Levy in her critique of raunch culture, 2005’s Female Chauvinist Pigs. Levy’s book burst the pleather-clad bubble of hotness then, and how funny things have developed since.

Female teen idols now slope to the stage in oversized hoodies and nihilistic indifference broken only by their grappling with anxiety, adulting, and the music industry’s desperate horror that these young women don’t need an army of Swedish songwriters to write a hit, nor the colosseum of besuited label execs to market themselves.

We live in an era where Nelly’s maxim that “it’s getting hot in herre” is no longer a cue to take off all your clothes, but to take off Friday, and protest the existential crisis of a planet on fire.

Yet, Christina Aguilera is still here. A career pivot as a reality TV judge kept her in the pop culture maelstrom, but one thing is for sure as she explodes on to the 3Arena stage in Dublin – her current energy is as fierce as her past legacy.

That voice – Mariah Carey crossed with a Ducati – explodes early with the song that initially brought her to attention, Genie In A Bottle. It’s a spectacularly good rendition. “It means the world to me to do what I was born to do,” she says, before launching into an unexpectedly tender The Voice Within. Within three songs, there have been three on stage costume changes. Fair play.

But what could pass for pop tropes begin to branch out into what is a surprisingly sophisticated, mature show, as Aguilera holds the space with strength. Back in the olden days (18 years ago) Aguilera’s personality only truly emerged with the one-hit supergroup that brought Lady Marmalade to the world (again), alongside Pink, Mýa, Lil Kim and Missy Elliott. Seeing it realised on Tuesday hammers home how fundamental it was to pop of that era.

At Dirrty time, it’s chaps at the ready. The raunch is dispensed with when Aguilera brings what has been her perhaps overlooked underlying sentiment of female empowerment to the fore. Images of women’s marches offer a powerful interlude, followed by that legendary clip of Cher, who played this same venue last week, saying “I am a rich man.”

Xtina drives the point home with a curveball: a brief rendition of Peaches’ Boys Wanna Be Her, and then her own Can’t Hold Us Down, to a backdrop of Barbara Kruger-inspired visuals, her female dancers now donning tuxedos.

A cover of This Is a Man’s Man’s Man’s World exposes that famous voice with nowhere to hide, and she nails it.

Many probably wouldn’t have guessed that Aguilera’s most played song on Spotify, with over half a billion streams is Say Something, a watery and almost algorithmic earnest duet with the act A Great Big World, which is as wide-eyed as their name suggests. But tonight it reaches for – and somehow achieves – tenderness. It’s a bookend to Beautiful, which also works. And while Aguilera has always been one to dispense with the melodic tenets of a track in favour of acrobatic adlibs, she achieves a balance that is quite perfectly weighted.

If there’s one song that sums up Christina Aguilera, it’s Fighter. It takes a lot of gumption to make it through the pop wars of the late 1990s and early 2000s, and Aguilera has gone the distance. In Dublin, the night after she spent the evening in Cassidy’s pub on Camden Street, there is nothing rough about a singer who revels in the grit, and emerges, shining.