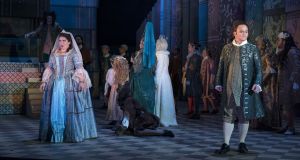 Bord Gáis Energy Theatre, Dublin
★★★★★
The latest production from Irish National Opera is advertised as Rossini/Cinderella/La Cenerentola, starring Tara Erraught. It’s a wonderful vehicle for a starry mezzo, but it’s an opera that needs not one but a team of seven fine singers. And that’s what the audience gets – not forgetting the male-voice chorus, with its vibrant and well-blended tone, the orchestra conducted by INO’s artistic director, Fergus Sheil, lots of well-choreographed movement and colourful 18th-century costumes. It’s good to see so many young people in the audience for a production that suits all ages and well deserves its standing ovation.

The overture comes with reminders of half a dozen fairy tales, and Nicky Shaw’s inventive set is full of such books, both large and small. The storybook backdrop works well, but the revelation of a complete library is a coup de theatre. The story of Cinderella, with its moralistic tale of true love’s triumph over kitchen-sink oppression, has of course been a long-lasting favourite, not least in many a pantomime. Rossini’s operatic version has no glass slippers or fairy godmother, but this production, directed by Orpha Phelan, brings together the mix of comedy and tragedy with a light touch, and those early fairy-tale appearances recur to great effect and with youthful involvement.

Some of the best moments are in the vocal ensembles, but all the solo roles demand great virtuosity, not least in the fast patter singing, such a feature of Rossini’s style

Some of the best moments are in the vocal ensembles, but all the solo roles demand great virtuosity, not least in the fast patter singing, such a feature of Rossini’s style. The tenor Andrew Owens, as Prince Ramiro, brings a ringing top register and easy fluidity to the bel-canto writing. His valet, Dandini, sung by Riccardo Novaro, is one of two fine baritones, the other being David Ostrek as Alidoro, the prince’s tutor. Both are characterful and distinctive, but perhaps none more so than the bass Graeme Danby, an ideal Don Magnifico, wickedly inhabiting the role of Cinderella’s stepfather.

His two daughters, sung by the soprano Rachel Croash and the mezzo Niamh O’Sullivan, are brightly voiced, wonderfully calculating in their mistreatment of Cinderella, and a perfect foil for Erraught’s rich mezzo. A commanding presence, she makes easy work of the technical demands, and her final scene is truly moving.

Golden decade: How Irish writing roared in the 1920s
7

Galway Film Fleadh online: The highlights of what to watch from wherever you are
8

Fontaines DC: ‘We’ve no licence to speak for Ireland’
10