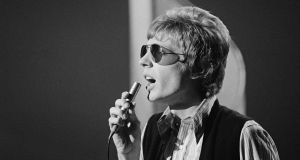 When David Bowie, Nick Cave and Brian Eno all salute you as a “musical genius”, you are more than an extraordinary talent, your work is woven into the musical fabric of the age. Scott Walker had an enviable fan-club and his deep velvet baritone adorned many a classic song but the American-British singer had a troubled relationship with fame, possibly even with himself.

The man born Noel Scott Engel in 1943 died on Sunday March 24th aged 76. He came to fame with The Walker Brothers in the 1960s – their popularity once rivalling that of The Beatles – but he would later, after many long absences from the music business, to recreate himself as an avant garde composer of some renown.

With his pin-up good looks and easy facility for performance, Walker was just 22 when he had his first UK number one hit with The Walker Brothers. The band weren’t brothers, and none of them was called Walker but their version of the Bacharach/David song Make It Easy On Yourself established them as an intelligent pop music grouping who sang brooding songs about doomed romance.

In a direct reverse of the American invasion of British groups breaking big in the US, the Walker Brothers were an American import who achieved their biggest success in the UK. Follow-up hits for the band included The Sun Ain’t Gonna Shine Anymore.

Using Phil Spector’s “Wall of Sound” recording techniques and drenching their songs with elaborate orchestral accompaniments, The Walker Brothers had a big, immersive sound over which they would sing forlornly of love and regret – these were ballads and torch songs on steroids, with Scott Walker’s voice reverberating in every musical corner.

While their record company wanted to keep the hits pumping out, Walker despised his pop-star status. His background was in progressive jazz and the beat poetry of the era. As the band’s main creative influence, he felt burdened by the responsibility of steering their career towards the safe, sanitised pop music the record label wanted, and the band eventually imploded in 1967.

In his solo career, Walker binned his teen idol image and, truer to his musical leanings, indulged in darker and more eccentric music at the very fringes of pop/rock for his solo career.

The albums Scott (1967), Scott 2 (1968) and Scott 3 (1969) were a world removed from the easy-listening sound of The Walker Brothers but their dark, unsettling subject matter made him a cult favourite. David Bowie, in particular, was inspired by how he transformed his career by returning to his creative roots regardless of commercial appeal.

Walker had self-confessed mental-health problems. He lived as a recluse and dedicated himself to learning about all forms of contemporary and classical music – even living in a monastery at one stage so he could study Gregorian chant.

His Scott 4 solo album, released in late 1969, was deemed too difficult to listen to and was deleted soon after its release. It has since though become retrospectively judged to be among his most important works. Radiohead, among others, have acknowledged it as a particularly significant musical work.

Perplexed by the reaction to Scott 4, Walker seemed to just disappear. He himself has alluded to dark days spent drinking while trying to work out his next creative move. The Walker Brothers reunited in the mid-1970s and had one of their biggest ever hits with No Regrets. A new album, Nite Flights (1978) was critically lauded but sold poorly, and Walker disappeared again for a number of years.

Julian Cope from The Teardrop Explodes brought Scott Walker’s name back into the limelight when he released a compilation album of his work called Fire Escape in the Sky: The Godlike Genius of Scott Walker. The album introduced him to the post-punk audience and would be an influence on acts such as Echo and the Bunnymen.

The gothic beauty of Walker’s voice and the idiosyncratic melodic patterns conjured up a unique art-pop sound that still influences musicians today.

Subsequent solo albums such as Climate of Hunter (1984) and Tilt (1995) were mini-masterpieces, difficult to listen to at times but firmly establishing Walker as a significant modernist composer.

Subsequent solo work saw him ignore the melodic, orchestral pop template that first brought him fame as his music drifted, with not a few crash and bangs, into avant gardism. For Walker, it was all about the sounds and how they could be shaped, the song per se didn’t matter.

The journey he took musically from teen pop crooner to a significant force in modernist musical composition is perhaps unique. His was a eccentric genius - somewhat along the lines of Syd Barrett or Brian Wilson.

His record company, 4AD, said of his passing: “For half a century the genius of the man born Noel Scott Engel has enriched the lives of thousands. Scott Walker has been a unique and challenging titan – audacious and questioning. He has produced works that dare to explore human vulnerability and the godless darkness encircling it.”