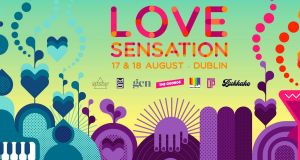 Dublin’s newest festival LOVE SENSATION will be coming to the Royal Hospital Kilmainham this August 17th and 18th.

Brought to you by the team behind Mother and hosted by the Queen of Ireland Panti Bliss, the new two-day music and arts festival is aimed at the LGBT+ community and their many friends.

The festival organisers promise plenty of “surprises from The George stage, a Mother Dance Tent you won’t want to leave and a host of RuPaul Drag Queens brought to you by Dublin drag legends “Dragged Up” including Monet X Change, Naomi Smalls, Jujubee, Laganja Estranja & Sonique”.

Promoter and founder of Mother, Cormac Cashman, said “LOVE SENSATION feels like a natural progression for us. We’ve wanted to run a music festival for years, something that caters to our community and focuses on inclusivity, fun, good music, good times and sound people. We’ve been lucky enough to have amazing success with our Pride Block Party (now in its 9th year), so 2019 feels right for us to grow even bigger and launch our own music festival!”