Scott Walker, singer and star of The Walker Brothers, dies at 76 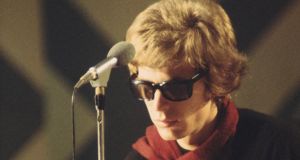 Scott Walker, one of the most innovative and enduring songwriters of the 20th century, has died aged 76.

The news was announced by his label, 4AD. “For half a century, the genius of the man born Noel Scott Engel has enriched the lives of thousands,” a statement read. The cause of death has not been announced.

Walker first came to fame in the mid-1960s in the group the Walker Brothers, before creating a string of acclaimed solo albums – Scott I to Scott IV – that are regarded as some of the most adventurous and boundary-pushing pop albums of the era.

He then moved further out to the periphery of the music scene, with an increasingly experimental run of albums, including 1995’s Tilt and 2006’s The Drift, which reflected on Mussolini’s mistress, the Srebrenica massacre, and 9/11.

His most recent work was music composed for the Natalie Portman movie Vox Lux.

Walker was born Noah Scott Engel in Hamilton, Ohio in 1943, and grew up in California. In 1964, he teamed up with John Maus – who was naming himself John Walker – and became the duo the Walker Brothers. Their drummer Gary Leeds was a veteran from the nascent “swinging London” pop music scene, and persuaded them to relocate to London, where Walker has been based ever since.

They scored two No 1 hits with Make It Easy On Yourself and The Sun Ain’t Gonna Shine (Anymore), and their dapper, hirsute image earned them heartthrob status – their fanclub once had more members than the Beatles’. “We would be on stage sometimes for a minute, and this whole gig would be over”, Walker once said of the screaming mania that surrounded them.

It is with great sadness that we announce the death of Scott Walker. Scott was 76 years old and is survived by his daughter, Lee, his granddaughter, Emmi-Lee, and his partner Beverly: https://t.co/awaFXWOkja pic.twitter.com/nd6MYVmWaO

While their chart-topping hits were cover versions, Walker was also writing his own material, the pressure of which partly prompted the breakup of the group. “Everyone relied on me, and it just got on top of me. I think I just got irritated with it all,” he said – they disbanded in 1967.

“Initially, it was fantastic, and I learned so much,” he said of the era in an interview with the Guardian in 2018. “I got to work with huge orchestras and good budgets. But after a while, the formula – they still wanted the same thing. I had to figure out how we were going to get a song that’s going to do the same thing. And it wore itself out.”

Walker went solo, and continued to make symphonic 1960s pop, albeit with an epic, psychedelic, high-minded tone – The Seventh Seal, from Scott 4, reflected on the existential fantasies in Ingmar Bergman’s film of the same name.

In the 1970s, he reverted to cover versions for a string of albums, but then reunited with the Walker Brothers. Their albums included the highly regarded Nite Flights (1978), which featured four Walker-penned songs, featuring shadowy moods and the use of electronics: it was to foreshadow the work he would do in the latter part of his career, where he used the same thoughtful, crooning voice of his Walker Brothers hits to darken and subvert pop.

Releases became more intermittent, but were often landmark works. 1984’s Climate of Hunter saw him update his sound to match the digital pop of the decade, creating atmospheric soft rock; 1995’s Tilt featured sweeping, experimental balladry. 2006’s The Drift – which infamously featured the sound of meat being punched – began a late surge of work, including a 2014 collaboration with avant-metal band Sunn O))), Soused.

He also wrote a number of scores, including two recent films by Brady Corbet, The Childhood of a Leader and Vox Lux. In 2006, a documentary, 30th Century Man, was made about Walker – it was executive produced by David Bowie, and featured him alongside testimonies from Jarvis Cocker, Damon Albarn and Brian Eno. “Who knows anything about Scott Walker?”, Bowie wondered during the documentary, a reference to Walker’s relatively reclusive lifestyle.

Walker, for his part, felt that he was continually honing his work. “I can rate them, the albums, as I go along,” he told the Guardian in 2018. “Not the early ones, because I’ve no idea any more, but I can say the success rate of, say, Tilt, was about – from what I wanted to get – 65%. And then the next album was 75%, and on and on until I hit Soused, which was pretty perfect.”

Thom Yorke, frontman of Radiohead, was among those paying tribute, calling him “a huge influence on Radiohead and myself, showing me how I could use my voice and words.”

“So very sad to hear that Scott Walker has passed away, he was a huge influence on Radiohead and myself, showing me how I could use my voice and words. Met him once at Meltdown, such a kind gentle outsider. He will be very missed,” Yorke said on Twitter

Singer-songwriter Marc Almond said he is “absolutely saddened” and “shocked” at Walker’s death. “He gave me so much inspiration so much I owe to him and modelled on him even down to my early S C [Soft Cell] hair cut and dark glasses,” Almond wrote on Instagram. “He cemented my love for Brel. He was enigmatic, mysterious and with some of his latter recordings, to me, infuriating. “An absolute Musical genius, existential and intellectual and a Star right from the days of the Walker Brothers. “So many of his songs will go round in my head forever. And that Voice. “We lost Bowie now we’ve lost him. There is surely a crack in the Universe. Thank you Scott.”

Other artists have paid tribute. Cosey Fanni Tutti said it was “unbelievably sad”, Midge Ure described him as “the man with the mahogany voice”, while producer Nigel Godrich tweeted that he was “truly one of the greats”.

4AD’s statement continued: “From teen idol to cultural icon, Scott leaves to future generations a legacy of extraordinary music; a brilliant lyricist with a haunting singing voice, he has been one of the most revered innovators at the sharp end of creative music, whose influence on many artists has been freely acknowledged.”

Walker is survived by his partner Beverley, his daughter Lee, and his granddaughter Emmi-Lee. – Guardian, PA