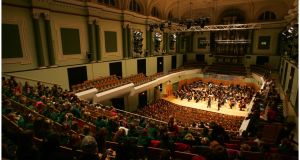 The title page of the printed programme for the RTÉ National Symphony Orchestra’s concert at the National Concert Hall on Friday has a banner headline “Towards 2022”. File photograph: Bryan O’Brien/The Irish Times

What are you looking forward to in 2022? The Winter Olympics? The Fifa World Cup? The Commonwealth Games? Or, perhaps less likely because they are annual events, the musical offerings of the festivals in Wexford, Kilkenny, Bantry?

I ask the question because RTÉ seems to know the answer but not to want to divulge it. The title page of the printed programme for the RTÉ National Symphony Orchestra’s concert on Friday has a banner headline “Towards 2022”. Beyond that, there’s not even a mention, let alone an explanation of the connection. It’s not mentioned in the notes on the music, nor in the note on the orchestra and its activities. It’s as if we are all presumed to have known about it. Not even the presenter Paul Herriott, who introduced the concert from the stage for listeners to the live broadcast on RTÉ Lyric FM, referred to it. And there’s no real clue in the programme itself, which consisted of works first performed in St Petersburg in 1819, in London in 1938 and in Dublin in 1981.

To find out what it’s referring to you have to go to the orchestra’s 2018-19 season brochure. NSO general manager Anthony Long writes about it as a “mini sub-season” where “the focus is on Irish classical music and music with links to our rich and underexplored classical music heritage”. He adds, “this, we hope is a first step in bringing our art music to the wider audience.”

Long, who became manager of the NSO two years ago, is in a perfect position to know how strange it is for him to claim this as a “first step”. Before he managed the NSO, Long was manager of the RTÉ Concert Orchestra. That is the post he held in 2016 when RTÉ presented the Composing the Island festival, the largest celebration of the work of Irish composers ever undertaken anywhere.

If anything was the kind of first step that Long is claiming, Composing the Island was it. That three-week-long festival covered not only orchestral music from both of RTÉ’s orchestras, but also chamber music, song and instrumental recitals.

It would be astounding if Long did not realise that some of the repertoire in the three Towards 2022 concerts of his current season has actually duplicated works heard in Composing the Island.

I’m not for a moment suggesting that such duplication is a bad thing. Repeat performances of Irish composers’ orchestral music have not exactly been a regular feature of RTÉ’s programme planning. But to claim works which RTÉ itself scheduled less than three years ago as firsts is disingenuous at the very least.

Scrutinise Long’s claim a little deeper and you’ll see a much deeper problem with the repertoire planning. Towards 2022 is focused not just on Irish music, but also music with “links to” our rich and underexplored classical music heritage.

Gerard Victory, whose Three Irish Pictures, opened Friday’s programme, studied with Alan Rawsthorne and also attended the DarmstadtSchool in Germany. John Field, whose Sixth Piano Concerto was dispatched with finesse by Alessandro Taverna, taught Mikhail Glinka, the first Russian composer of note.The great composer/pianist Ferruccio Busoni, who died in 1924, had been planning to get a Field revival under way in the 1920s.

In the context of Victory’s limited training – he was mostly self-taught – it’s interesting to see where the international connections of other Irish composers lie. Seóirse Bodley, now in his mid-80s, studied in Stuttgart with Johann Nepomuk David. Frank Corcoran, who turns 75 this year, studied in Berlin with Boris Blacher. Eric Sweeney, Jerome de Bromhead, David Byers and Jane O’Leary, all in their 70s, studied, respectively, in Italy under Goffredo Petrassi and Franco Donatoni, in Liège under Henri Pousseur and at Princeton under Milton Babbitt. And the soon to be septuagenarian Roger Doyle studied at the Instituut voor Sonologie in Utrecht and the Finnish Radio Experimental Music Studio in Helsinki.

Crucial inspirational contacts for Irish composers under 70 are as likely to have been from continental Europe or the US as from Britain. But the management of RTÉ’s two orchestras (Long has yet to be replaced as manager of the RTÉ CO) seem blind to these wider connections. They seem to see Irish composers’ only interesting connections as being British ones.

I may, of course, be completely wrong about this. It could be decision-making that is purely commercial rather than artistic. Just look at the non-Irish composers who have featured in Towards 2022. Arnold Bax, who had a huge grá for Ireland, EJ Moeran, whose father was Irish (and whose Symphony in G minor was given a lurid account under Timothy Henty last Friday), and Ralph Vaughan Williams, with whom a number of Irish composers studied, are all better known names than some of the connections from further afield which have long been ignored by RTÉ.

But if Long is planning to continue with his Towards 2022 idea, it would be good if he could engage in some proper, joined-up thinking, starting with backgrounds and explanations for the very enterprise itself for the audiences in the hall on the night.

If anything gives a hint of the extent of the rethink that’s needed when the RTÉ NSO is finally freed from the shackles of RTÉ management it’s the kind of lazy thinking that lies behind the still mysterious musical concept of Towards 2022.