Pills, thrills and backaches: How to relive your Ibiza days

From Jenny Greene to Underworld, the summer is packed with house music nostalgia 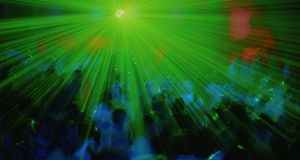 Dara Ó Briain used to tell a joke about a geriatric Generation Xer invading the dance floor at a wedding years in the future. “That’s not a dance. This is a dance,” he would declare, flinging aside his walking stick and launching into Keith Flint’s pretend-scary shuffle from The Prodigy’s Firestarter video. It always got a laugh from the twentysomethings in the audience. An older person gyrating to The Prodigy: hilarious!

Twenty years later we’re not quite at the point when mid-1990s techno-metal is pumping from speakers at care homes. But dance music has undoubtedly matured with its audience, including those now middle-aged Gen Xers who cracked up at Ó Briain’s impersonation of a wrinkly Flint (who’ll be 49 this year).

All music genres grow old eventually. Rave – or house, techno or electronica: call it what you wish – is no different. On Thursday clubbers of all ages, including a significant number of over-35s, will gather at Energia Park – aka Donnybrook stadium – in Dublin to watch the RTÉ Concert Orchestra and the 2FM DJ Jenny Greene apply a classical overhaul to such glittering mementos of 20th-century popular culture as Rhythm Is a Dancer, by Snap!, and Faithless’s God Is a DJ. Thousands more will flock to repeat performances in Cork over the following two days.

What’s the difference, a cynic might wonder, between waving a glow stick at Jenny Greene at a rugby pitch in south Dublin and clapping along to a Beatles tribute act?

The big summer dance event, meanwhile, is a headliner by Carl Cox at Ballinlough Castle, in Co Westmeath. Cox is 55, the age Mick Jagger was in 1999 when jokes about The Rolling Stones and their Zimmer frames were already common currency.

And if you can’t make that, perhaps you will be at Electric Picnic, where the 1990s comedown banner will be fluttered by Massive Attack’s Robert Del Naja, who is 53, and Grant Marshall, who is 58. Were Ebeneezer Goode around today he’d probably have a bus pass and reading glasses.

The idea of dance music as inherently youthful is so ingrained that the knee-jerk reaction as rave slouches towards the grave is to point and giggle. The ancient acid-house devotee is on the way to becoming a cliche, while seasoned acts such as Underworld, who are headlining All Together Now, in Waterford, and Orbital, at Beatyard, in Dún Laoghaire, are caricatured as representatives of “dad techno”.

Ironically, some of the push-back against the repackaging of acid house and its offshoots as a heritage industry has come from the very artists standing to benefit from it. When Pete Tong took an orchestra on tour to reprise 1990s “Ibiza classics” – you may have seen him at the 2017 Electric Picnic – it was none other than Massive Attack who called him out.

“Thanks for covering one of our songs on your nostalgia nightmare roadshow,” Del Naja said on social media. “I don’t recollect you getting in touch to see if we would mind.”

The irony, of course, is that the middle-aged ravers arranging babysitters so they can bunk off to Carl Cox or Massive Attack were the very ones who, 20 years ago, rolled their eyes as their own parents flocked to reunion tours by the Eagles and the Stones.

Snap!: Rhythm Is a Dancer

What’s the difference, a cynic might wonder, between waving a glow stick at Jenny Greene at a rugby pitch in south Dublin and clapping along to a Beatles tribute act?

“These events aren’t really for teenagers or twentysomethings. They’re for parents – who, admittedly, may take their children. It’s aimed at being a night of pure, unadulterated nostalgia. It’s no accident that Pete Tong uses Ibiza imagery from Es Vedrà,” says Ralph Moore of Mixmag, referring to the iconic rocky Balearic island. “That place and feeling still resonate. Adding strings and things gives the night class and gravitas. But are there now too many? The Hacienda Classical” – which, like Greene’s show, uses an orchestra to play club hits – “is also pretty classy, but there are way too many of these things cashing in now.”

The crucial distinction, say those in the business, is that dance music is participative. You’re not just standing there watching.

“The whole orchestra wave is . . . a bit gimmicky – and, yeah, it is pure nostalgia vibes,” says the writer, DJ and Ibiza old-timer Joe Muggs. “But if you go and see Altern-8 or Larry Heard, or Kerri Chandler, or Andrew Weatherall, or Carl Cox, or Goldie, or DJ Harvey or any other veteran . . . you’re not going to stand there politely and see them run through their catalogue. You’re going out to have a dance, to reconnect to the dance floor.

“Nostalgia for raving is fundamentally different to nostalgia for seeing bands, in that it is, or should be, about the experience more than just the tunes,” he says. “And that experience was and is . . . about you dancing and becoming part of the crowd, as much as about who’s up on stage or in the DJ booth.”

He cites a London event at which parents bring their kids to a daytime “rave”. The tunes are high-tempo and feelgood, and the strongest stimulation on hand is chai latte. It isn’t naff or tragic: it’s a great day out.

“My wife is one of the founders of Big Fish Little Fish, that do afternoon raves . . . They have lots of DJs from the old days, as well as younger guys, like Hatcha, Plastician and so forth,” he says. “Their parties aren’t nostalgia at all. They’re absolutely about getting that dance-floor magic working in the here and now – and, from that, building community, bringing a bit of that magic back into your day-to-day life.”

Stephen Grainger, aka Stevie G, a DJ and producer who cut his teeth on the house and hip-hop scene centred around the Cork club Sir Henry’s, in the early 1990s, says: “Festivals have been clever in recent years, and they know their demographic. Longitude is almost exclusively young and hip-hop orientated, while the older ravers will be heading to something with more of a nostalgia element . . . Electric Picnic, Altogether Now and many other good festivals target this crowd, as do specialist gigs such as LCD Soundsystem.”

One thing that sets club music apart, he points out, is that it grew out of disco and so differs fundamentally from rock and pop. Disco was always accepting of outsiders – indeed, its entire point was that it was music for outsiders by outsiders.

Those values have carried through to techno. Where once “outsider” might refer to ethnicity or sexual orientation, today it could mean a 45-year-old father of three with a naff T-shirt and a Stone Roses-style fishing hat bopping on his own at a festival.

Acid house was our Woodstock. It’s no surprise that festivals since then have DJs in the same billing as premiere-league artists on them

“DJing in Sir Henry’s in the 1990s, I was a kid. However, there was a harmonious vibe between younger clubbers and older ones who were in their 30s,” says Grainger. “These days it’s probably more segregated. But music is for everyone.

“The younger crowd get a lot of flak, but they are the best crowd to play to in many ways. There is no substitute for energy and enthusiasm. Young people are just happy that they can finally go and rave and party. Older clubbers and ravers have very different expectations.

“At a festival a few years ago I was meeting people my own age all weekend who were complaining about the weather, the music, the toilets, the line-up, the sound, the tents, the food and, yes, even the noise. A few weeks later, at Longitude, I played to the most enthusiastic crowd of my life, and I couldn’t help notice the difference. It was striking.”

“Acid house was . . . our Woodstock,” says Ralph Moore. “It’s no surprise that festivals since then have DJs in the same billing as premiere-league artists on them: in this age, DJ-producers like Nina Kraviz have as much clout as Noel Gallagher. It’s not a bad thing: acid house inspired a social movement that’s yet to be replicated in the same seismic way.

“No one is getting any younger, but there’s undoubtedly a pride among middle-age ravers. These parties and this music – primarily house music – helped define their lives. In a way, going to events like this validates that thinking, even if it is a bit more structured and formal. Forty is the new 30 for a lot of people. And dancing keeps you young.”

2FM Live: The RTÉ Concert Orchestra and Jenny Greene are at Energia Park, Dublin, on Thursday, June 21st, and Live at the Marquee, Cork, on Friday, June 22nd, and Saturday, June 23rd