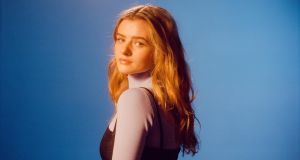 Who: Rosie Carney
What: Soul-baring singer-songwriter
Where: Donegal
Why: At the age of 16, Donegal’s Rosie Carney signed a record deal that guided her away from the unadorned and honest songwriting that she wanted to pursue. After that false start, Carney knuckled down and got even more real and began to address her battles with anxiety, depression and an eating disorder that occupied her teenage years.

As she told Mahogany in a recent video documentary, the catalyst for change was when her grandmother, who suffers with dementia, asked her mother if Rosie had cancer, as she was so thin. Music really became a form of therapy for her.

Last year’s single Awake Me, released as a 19-year-old, was a song about escaping the grip of depression. “From down on the dirt / to under mountain tops / where our life stops / and I’ve been a fool / for more than half my life / I’ve tried to hide / awake me / don’t break me,” she sings gently as if lifting the fog and opening her soul to the listener.

Each song Carney releases is a resonant depiction of a person moving on, learning and coping. Instrumentation is sparse: guitar, piano and little else. It’s Carney’s voice that holds the attention. A suitable cover of Cigarettes After Sex’s K pares back an already-sparse song to its essentials, while her newest song, Bare, reaches for a hand in hard times.

It’s music that comes entirely from Carney’s own experiences and expression, which would likely have been diluted by industry machinations. Carney’s music now offers solace for others as well as herself.

You have to hear this: Saint Sister – Twin Peaks

Gemma Doherty and Morgan MacIntyre have been on the cusp of something great for a while now with their “atmosfolk” harp, synth and harmony songs. With their debut album finally arriving in the autumn, Twin Peaks is the latest reminder of the majestic and heavenly sound the duo can seemingly easily create. An Irish tour happens in October.

You have to hear this: Arctic Monkeys – Four Out of Five

Hats off to Sheffield’s finest, who could have easily released another million-selling rock album. Instead, Tranquility Base Hotel & Casino imagines a luxury resort on the moon in which Alex Turner is the host. It’s a strange and edifying album that takes its cue from 70s sci-fi and Lennon-esque lounge psychedelia. Four Out of Five encapsulates the album’s stargazing mood with lyrics about a gentrified moon: “I put a taqueria on the roof, it was well reviewed / four stars out of five / And that’s unheard of.” Quite.

The three funerals of Terence MacSwiney
9