Richest pop stars and musicians in Ireland and UK revealed 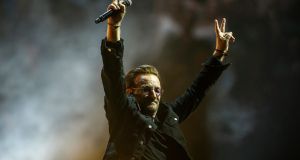 Bono performs with U2 at the BOK Center in Tulsa, Oklahoma, on the US leg of their d’s Experience + Innocence tour. Photograph: Photograph: Shane Bevel/The New York Times

In time-honoured Irish begrudger fashion, here is even more reason to bitch: U2’s wealth is now an estimated £569 million (€647.7 million) – up a whopping £21 million on last year, putting them in third place on the list of the richest musicians in the UK and Ireland, according to the Sunday Times. .

Their marketing strategy is clearly not too innocent and exhibits lots of experience to maximise sales. Bundling Songs of Experience, their 14th studio album, with tickets for this year’s Experience + Innocence tour, apparently helped the album debut at number one in the US, making U2 the first group to top the country’s chart in four consecutive decades.

And there’s surely more cash to come – the Experience + Innocence kicked off in the USlast weekend on a jaunt around the US till July, moving to Europe in August (they’re in Belfast in October and Dublin in November).

True begrudgers will observe that maximising tax, um, efficiency by paying it through other countries helps a great deal in amassing and increasing that level of wealth.

But will there be a halt to that gallop, if not the musical one? In February 2018 the Irish Times reported U2 may face closure of loophole they used to avoid taxes, as Netherlands is reforming its tax system to clean up its image. The band, among others, manage royalty payments from records and performances through the Netherlands.

Oh, the perils of too much money.

And last November Bono said he was as “extremely distressed” after The Irish Times revealed that he featured in the Paradise Papers documenting offshore accounts. (His spokesperson previously denied wrongdoing, saying “Bono was a passive, minority investor in Nude Estates Malta Ltd”).

Then there’s the various well-meaning pronoucements which seem to get up people’s noses.

Yes, yes, the band, and Bono in particular, use their fame and profile for good too, and they even hang out around the place like ordinary folk from time to time. But that genuine social conscience seems to irritate some people even more. Maybe it’s our general begrudgery; or maybe it’s the cash making us cynical.

That cash has rolled in, over years and years. U2 have sold some 175 million records worldwide, and the band is the 21st-highest-selling music artist in the US (eight albums have reached number one in the US, the third highest of any group).

Michael Flatley, another star people love to hate, somehow danced his way on to the musicians’ list at number nine, with £202 million. The Irish-American hoofer r and choreographer astutely capitalised on Riverdance’s phenomenonal success, with a succession of themed dance shows, from Lord of the Dance to the title that says it all, Celtic Tiger. Why are we so irritated by his American pzazz and can-do spirit? Well, read it and weep, because the can-do clearly does it. A helluva lot of talent and the drive to break a mould helps.

(Did you know: a section of New York’s famous 42nd Street was named Flatley Way, from when his Lord of the Dance:Dangerous Games was on Broadway.) Flatley’s homepage headline is upfront: Follow your dreams, and he warmly offers the advice, “nothing is impossible”. Not even £202million, and a fancy pad in Cork (his Castlehyde House mansion is still for sale).

Despite their rich pickings, they had nothing on Paul McCartney and his independently wealthy wife Nancy Shevell (combined dosh £820 million) and Andrew Lloyd-Webber (£740 million).

In the wealthiest young musicians list, Niall Horan ranks at number four, two below adopted Irishman Ed Sheeran, whose wealth grew by £28 million last year – more than any other British musician. The 27-year-old singer-songwriter has an overall net wealth of £80 million.

While at 35th place in the overall list of richest UK musicians, the Shape Of You singer is second-wealthiest young musician. After the 2,127 live shows he could have sold out in Ireland this spring if he’d wanted to (aside altogether from anywhere else he’s performing, and recording sales), it’ll be interesting to see what level of wealth he’ll have next year.

The top 40 musicians have accumulated wealth of £7bn, up £425m in a year. And female artists see biggest gains in musical youth charts.

Further down the wealthy younger musicians, Rita Ora (numbers 11 in younger musicians) and Calvin Harris (number 11 in the general list) and have also risen up the richlist after enjoying huge chart success. Calvin Harris is the only new entry in the top 20 on £140 million, up £20 million. And Rita Ora has joined the list of the wealthiest young musicians, with £16 million (she had four UK top 10 singles in a year, plus was in the Fifty Shades films and has deals with Adidas, Tezenis lingerie, Rimmel, DKNY and M&S). Adele is worth £140 million, an increase of £15 million on last year, so she he stayed at the top the rich list for young musicians.

All this is a teaser this week singling out the richest musiciansfrom from the upcoming Sunday Times richlist, from its regular richlist, which calculates the wealth of the 1,000 richest people living in Britain based on “identifiable wealth”, including land, property, assets and shares, but not cash in bank accounts.

While the Sunday Times’ main richlist is of UK residents only, this richest musicians list includes UK and Ireland. A bit confusing. So does that mean we can’t begrudge an appropriation of our millionaire rock stars as well? – Additional reporting: PA

Yungblud: ‘My generation is over being divided’
7