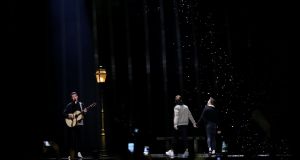 Ireland’s Ryan O’Shaughnessy performs ‘Together’ next to two male dancers during the Eurovision Song Contest in Lisbon. Photograph: Pedro Nunes/Reuters

A leading Chinese broadcaster has been banned from broadcasting the second semi-final of Eurovision after it censored LGBTI content from the first leg, including “Together” by Ireland’s Ryan O’Shaughnessy.

The performance of Mr O’Shaughnessy’s song tells the story of a same-sex romantic relationship and features two male dancers.

Another song censored was the Albanian entry “Mall” as the singer Eugene Bushpepa and one of his musicians both sport visible tattoos.

In January China stepped up censorship of content it considers “moral degeneracy” and “vulgarity” including people with tattoos and hip-hop. Then last month, the social media Sina Weibo banned gay-themed content to “purify” the online environment.

The ban was withdrawn several days later after a huge public outcry.

More recently, the British animated children’s show Peppa Pig was banned because the main character had become a “subculture icon” on social media.

In a statement, the European Broadcasting Union said the decision to censor the two performances was “not in line with the EBU’s values of universality and inclusivity and our proud tradition of celebrating diversity through music.”

“It is with regret that we will therefore immediately be terminating our partnership with the broadcaster and they will not be permitted to broadcast the second semi-final or the grand final,” the EBU said.

The tattoo crackdown has led to the Chinese football team covering up their tattoos during matches and a music festival last month banned artists from showing their ink.

“I think it’s a really important decision by the EBU, they haven’t taken it lightly, and I think it’s a move in the right direction I’m happy about it,” he said.

“I would like to welcome the decision by the EBU to do that because from the very start we have just said love is love,” he said.

“It doesn’t matter whether it’s between two guys and two girls or a guy and a girl.”

The 63rd Eurovision Song Contest is being held in Lisbon with 43 participating countries. The final will be held on May 12th.