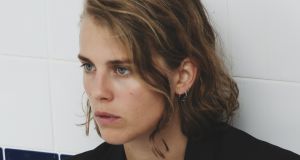 Marika Hackman: “People still get lumped into ‘queer artists’. But, actually, even in the last year that’s dropped off.”

In 2015, shortly after the release of her debut album, rumours began to circulate that indie singer Marika Hackman had a secret past modelling for Burberry. There’s nothing wrong with modelling for Burberry. Hackman, however, never modelled for anyone. The internet became convinced otherwise. For a nanosecond it was kind of a big deal.

“I’ve never been a model in my life,” says Hackman with a hint of exasperation. “I hate being in front of the camera.

“It was irritating,” she continues from her lockdown residence in London. “It is unfair when you’re a brand-new artist, you’re young and coming into something – to have information that people basically judge you on. And will continue to judge you on for years into your career. It’s really frustrating because people get so weirdly angry about that. What’s it got to do with anything?”

We Slept at Last (2015), her darkly dreamy first record, plunged deep into a gothic underworld of Hackman’s own imagining; it was Joni Mitchell by way of Emily Dickinson and Slowdive. She returns to that subterranean realm with her wonderful new album, Covers. As the title indicates, it’s her take on beloved material by other songwriters, including Elliott Smith, Radiohead and Beyoncé.

All of the artists mean a great deal to her – that’s why they’re on the LP. She speaks with particular passion about Grimes, a talented woman whose gender is routinely held against her in the media.

“There is a very classic thing where men get called ‘geniuses’ and women get called ‘crazy’. Prince can write music that goes all over the place and sounds nuts. But it’s genius. We give him the credit that he’s fully aware of every brushstroke. It’s the same with Grimes; she is an amazing artist fully in control of her art. And she obviously doesn’t give a f**k what anyone thinks. [Her music] is bonkers – but it’s not like she did that by accident.”

Hackman recorded Covers during lockdown. Like the rest of us she’s found it challenging adjusting to the N** N*****. Amid the gloom and the tedium, new material has not flowed as easily as she might have wished. The added complication is that her previous record, 2019’s Any Human Friend, represented a critical and commercial breakthrough. There is some pressure.

“I’m trying to keep at it,” she says. “And to keep the [songwriting] muscles flexing. It felt very difficult. I don’t know if that’s because there is this underlying feeling of dread and we’re all just checking out a little bit.”

Hackman was born in Hampshire, in England’s far south. Her English mother and Finnish father were animators who met at work. The family moved to Devon and Hackman later attended the exclusive Bedales school on a scholarship (alumni include Lily Allen and Hackman’s classmate Cara Delevingne). She wrote songs from adolescence and aged 18 dropped out of a fine arts degree to pursue music.

Her mastery of searing indie pop was confirmed emphatically last summer with Any Human Friend. It frankly and occasionally viscerally explored her queerness and the physical and emotional aspects of her personal life. With songs such as Hand Solo – what do you think it’s about? – she wasn’t holding back.

“I was singing about stuff to be honest,” says Hackman. “And to raise questions as to why people found it hard to listen to. Why, coming from me, it might be hard to listen to? As opposed to some guy singing or rapping somewhere else.”

The success of Any Human Friend crowned a peculiar year. She had, in March, lived through the strange experience of being a character in another artist’s record. Good at Falling was the debut by her former partner Amber Bain, recording as The Japanese House. The project chronicled, in often heartbreaking detail, the dissolution of their relationship.

Good at Falling is a gut-punch of a listen and frequently explicit about the fault lines running through the romance. At times it is as if the listener is eavesdropping or going through a stranger’s text messages. It’s exhilarating but disconcerting. How was it for Hackman?

“Amber is still a very close friend of mind,” she says. “I knew that record was coming. I would never want her to censor herself. I think it’s an amazing record and she’s a fantastic songwriter.

“There’s a part of me that thinks it’s quite sweet. It’s lovely that a relationship can come to an end and you can have a map of it. There’s stuff in there about things breaking down. And there are things in there about how much we loved each other.”

As she’s a millennial, I can’t resist asking Hackman for her thoughts about She Who Must Not Be Named, aka occasionally beloved children’s author JK Rowling. The writer who shaped a generation is now persona non grata to many in Hackman’s age group (and beyond) due to her divisive views about the trans community.

“Weirdly, I first read Harry Potter when I was 18,” says Hackman. “I got really hooked. I love Harry Potter. But actually I’ve always been more of a Lord of the Rings person. My childhood was Hobbit and Lord of the Rings. I came to Harry Potter way later. Which is more hardcore fantasy I would say, an extra level of nerd. Harry Potter is basic b**ch nerd. You get to Lord of the Rings and it’s true nerd. But obviously it’s disappointing when you see an author, and anyone who has a platform like that, spreading dangerous [ideas] through the world.”

Covers, in many ways, is the sound of Hackman sinking back into herself. In its slightly ambivalent and withholding ambience it feels like a companion piece to We Slept At Last. Melancholy bleeds into menace, her voice’s lullaby qualities counterpointed by a gorgeous starkness.

The context, though, is different. As a queer artist, Hackman was wary of being defined early on by her sexuality. Hence the layers of mystery shrouding her first album.

“At the beginning of my career, I was loath to sing about my sexuality,” she says. “I didn’t want it to be the defining factor of my music. Whereas now I feel I can write about stuff that goes on in my life.”

Things are moving in the right direction in terms of representation, she feels. And also in terms of how we do and don’t categorise LGBTQ+ musicians.

“People still get lumped into ‘queer artists’. But, actually, even in the last year that’s dropped off. A lot of people are tweeting that ‘queer isn’t a musical genre’. It’s not. People have eased off saying that. Unless the artist is explicitly talking about it for political reasons. And then it’s great. It starts a conversation that needs to be had.”

Covers is released on November 13th. Marika Hackman will perform a livestream gig on the night, tickets at nonchorus.com