First-rate soloists and the Wexford Factory enliven binge-watching this year’s Wexford Festival Opera online, a Festival in the Air 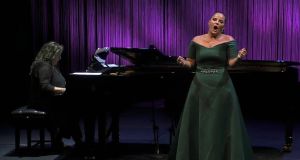 The Festival in the Air ran from October 11th-18th. The original Shakespeare-themed programme has been postponed to next year, and the Festival in the Air was its replacement, an eight-day online opera fest, with just a handful of key performances actually taking place live. Sadly, given the state of Covid-19 regulations, there were no in-theatre audiences, not even the small gatherings that would have been allowable had the festival taken place just a short time earlier.

I have to confess that online performances don’t carry the same appeal for me as flesh-and-blood concerts and events. And it has nothing to do with the online aspect. I feel the same way about music on radio and TV. Once I can record something or catch up with it at a time of my own choosing, I usually don’t feel any compulsion to watch or listen at the time of broadcast.

So in spite of my initial intentions I didn’t actually view anything from Wexford when the performances came on stream. This meant I could binge-watch the main productions – The Falstaff Chronicles (six episodes from Verdi’s Falstaff) and Lucrece (a new take on Shakespeare by Andrew Synnott, with a choice of three different endings).

The casts in both of these piano-accompanied offerings were members of the Wexford Factory, the festival’s new professional development academy for young Irish singers and singers based in Ireland.

Director Roberto Recchia went for a spirited updating of the Verdi, which had the fascination of double-casting across episodes. Rory Dunne was more sleazy and booze-infused in the title role than the rather straighter David Howes. And in the female line-ups the one with Sarah Shine as Nannetta and Jade Phoenix as Alice had the greater chemistry. Anna Brady as Mistress Quickly and Sarah Richmond as Meg were common to both. Carmen Santoro, the music director at the piano, was a tower of strength at all times.

The first version of Synnott’s Lucrece, with vengeance by social media inflicted on the lecherous Sextus – the imposing Rory Musgrave added to the cast of Factory singers – was billed as a farsa. The second, with a contrived feel-good ending, was a dramma giocoso. And the last, the one with a rape, was a tragedia.

The festival’s artistic director, Rosetta Cucchi, was the director and designer as well as the co-librettist, with Alessandra Binucci, in this version set in contemporary London. The star of the show was mezzo-soprano Sarah Richmond in the title role. It was her vehement resistance in the final and most persuasive version, and her aria of recovery, which showed her at her best.

The festival opened with a live concert of Rossini’s late Petite Messe Solennelle, composed for a private performance with the unusual line-up of four vocal soloists, choir, two pianos and harmonium. It’s neither small nor solemn but, in its original version (Rossini later orchestrated it) unique in colouring and often jauntier in tone than you might expect – the scoring heightens the work’s unusual tone in a way that’s masked in the orchestral version.

Wexford had a first-rate team of soloists – soprano Claudia Boyle and mezzo-soprano Tara Erraught, commanding and beautifully balanced in duet, an ardent Italian tenor in Pietro Adaini; the bass, John Molloy, was the only one who occasionally sounded under the weather. With Finghin Collins and Carmen Santoro on pianos, Andrew Synnott on harmonium, conductor Kenneth Montgomery didn’t shirk the work’s moments of jauntiness, and the young voices of the Wexford Factory provided a rich chorus.

The performance, dedicated to the victims of Covid-19, was preceded by a message from President Michael D Higgins, who talked passionately about artists’ extraordinary commitment to continuity of access to the arts in these challenging times.

The president name-checked soprano Celine Byrne in his introduction, and Byrne was the only singer to give a solo recital from the stage of the National Opera House – with the indefatigable, hard-working Rosetta Cucchi at the piano.

Byrne is a big-hearted singer who understands intimacy as well as grandeur, and she chose a programme that ranged from opera to songs by Mahler and Strauss as well as My Lagan Love and The Last Rose of Summer. She introduced the items and used the occasion to draw pointed attention to the recital being her belated debut in the venue – her way of making the point that she never got to sing there during the long reign of Cucchi’s predecessor, David Agler, as artistic director.

The shadow of Covid-19 was never that far away during the week. The Wexford Factory’s pop-up events around town took place in galleries without visitors, shops without shoppers, and suffered quite a number of technical hitches along the way.

The Gala Concert Remote Voices featured singers who have performed at the festival over the years in videos in domestic settings. It was like a throwback to the early days of the pandemic. And the closing gala featured a socially distanced, perspex-protected and mostly masked Wexford Festival Orchestra under Francesco Cilluffo. With soprano Claudia Boyle and tenor Pietro Adaini as the stylish soloists, this was the concert that most fully this year brought to the National Opera House the blend of sounds that usually permeate it at festival time.

I can’t cover the festival’s Impossible Interviews with soprano Ermonela Jaho, opera director Graham Vick, and the music director of the Royal Opera House in London, Antonio Pappano, as I was the interviewer. And I’m still looking forward to catching up with the festival’s other wordy events, the two Dr Tom Walsh Lectures.

Throughout the week I was not able to stop thinking about the eye-watering statistics in Deirdre Falvey’s article published the day before the festival, in which she reported on a forecast that the 2020 recession in the arts sector would be five times worse than in the economy as a whole; a shrinkage of 55 per cent as opposed to 11 per cent. That is a terrible prediction for a sector where the average annual earnings of €26,310 in 2019 were just shy of 35 per cent below the national level of €40,283. Here’s hoping that the threat in that prediction won’t somehow get in the way of a normal(ish) Wexford festival this time next year.