Least Like the Other – Searching for Rosemary Kennedy review: Deeply moving

The gut-wrenching, experimental telling of the story of JFK’s hidden sister 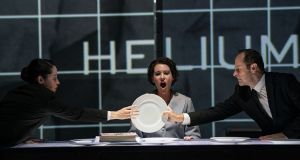 From left, Stephanie Dufresne, Naomi Louisa O’Connell and Ronan Leahy in Least Like The Other, Searching for Rosemary Kennedy. Photograph: Pat Redmond

This is deeply disturbing art, and deeply moving and humbling. The way it hits you goes well beyond the gut-wrenching details of its now long-ago true story. Instead, it does that thing that good art so fluently does: make us reflect critically on ourselves. And it’s good art in the form of opera, but with no opera pedigree required: anyone could be left breathless by this.

With tremendous power, Least Like the Other produces this response even though it avoids simply converting an already compelling story into a traditional operatic narrative. This was a conscious decision by its co-creators – composer Brian Irvine and director/designer/video designer Netia Jones – partly because they knew indulging the sensational would detract from its enormous themes, and partly because material relating to what actually happened was very hard to come by.

Which was no accident. The Kennedy family patriarch, Joseph Kennedy, attempted to obscure the existence of his daughter Rosemary, believing her intellectual disability would damage the high-profile perception of his family in general and the ambitions of his sons John F, Bobby and Ted in particular. By the time she was 23, her convulsions and violent episodes proved beyond the capacity of medical expertise at the time. So in 1941 Joseph had Rosemary lobotomised. The now discredited procedure was a disaster, leaving her with the mental capacity of a two-year-old for the rest of her long life (she died in 2005).

Instead of a libretto, Irvine and Jones have assembled fragments of letters, biographies, speeches, intelligence tests and so on. These – either animated with cold brutality by actors Stephanie Dufresne and Ronan Leahy via multiple personas, or sung with pathetic intensity by mezzo-soprano Naomi Louisa O’Connell, chiefly as Rosemary – chillingly lift the lid on mid-20th-century America’s acceptance of the unquestioning compliance of women in society and on attitudes to intellectual disability, to children, to publicity, and to subservience before big institutions in medicine, the media and religion.

Irvine’s music rises and falls, harshly expressing the story’s harsh content, quietly and sometimes lyrically reflecting on its tragedy. This is ideally paired with the clinical, era-specific coldness of Jones’s set and the incisiveness, power and sometimes sheer beauty of her video projections.

Conducted by its artistic director Fergus Sheil, this was the two-year-old Irish National Opera’s first world premiere, in association with Galway International Arts Festival, and further evidence that with INO, opera in Ireland can be for all, and can be vibrant, relevant and compelling.