Schemes for women in music help, just don’t look at the rest of the programme

The art of misdirection is acceptable in music, until it’s about distraction 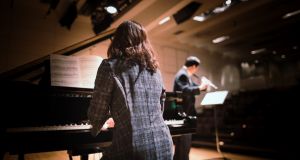 Schemes to promote women in music help, but just serve to distract from how poorly they are otherwise represented

I have a real soft spot for magic, the kind of magic that magicians do, whether on stage, on television, or right in front of you on the street. Obviously it’s all about deception, and a lot of it is about skilful lying. I’m reminded of one of the viola-player jokes musicians love so much. “How do you know when a viola player is playing out of tune?” it goes. “The bow is moving.” In the world of magic you could ask, “How do you know a magician is lying? The lips are moving. Words are coming out.”

Whether it’s doing impossible things with cards, making rabbits appear out of nowhere, or appearing to know in spooky detail about your deepest, innermost thoughts, one of the key components is misdirection. Sure, some magicians practise technical details of their routines as thoroughly as virtuoso musicians. There are gimmicks and gaffs of the most cunning ingenuity. But misdirection is everywhere.

Most of us probably have ideas about pointing in one direction so that a key movement can be made where nobody is looking. Slydini doing his paper balls trick is a classic example. Look it up on YouTube. It’s really worth the trouble. The biggest fascination is that it’s all done so that everyone bar the victim on the stage can see exactly what’s going on.

There is of course also a Ted Talk on misdirection. It’s given by Apollo Robbins, a slick pickpocket expert who successfully stole items from secret-service agents protecting US president Jimmy Carter. The ensuing publicity brought him work from police departments and security experts.

He introduces the talk as being about controlling people’s attention and predicting their behaviour. He asks us to imagine a kind of security guard in our brains. He calls him Frank, and explains – and then demonstrates – how Frank’s not unlimited attention (he never mentioned a Frances) can be exploited. He then riffles pockets, steals someone’s watch, and plays hide and seek with a casino token.

What fascinated me most about the idea of Frank is the way words play such an important role in misdirection. Robbins spoke with that kind of self-fuelling seamlessness that characterises stage magicians’ patter. Yes, he also engaged in classic misdirection through distraction and pointing. But the rapid flow of words was crucial, giving everyone’s Frank a lot of material to process and thereby reducing the amount of attention available to anything else.

This, if you think about it, is also classic behaviour for politicians. Donald Trump and Boris Johnson are leading experts. They would, politically speaking, be naked as the day they were born if they had not honed their skills in distraction. And Irish politicians use the same technique every day on radio and television.

I remember reading about a famous British actor who couldn’t really sing but found himself cast in a musical. He was particularly worried by a moment with a high note that was completely beyond his reach. Every night it came around, he said, he shot an arm in the air and stamped his foot at the same time, and no one seemed to notice that he was squawking on the wrong note.

Similar techniques are not unknown in the world of pure classical music. There are passages for every instrument and voice type that are particularly awkward. Some are awkward for everyone, some are difficult for particular individuals, and others are just downright dangerous, hard if not almost impossible to deliver accurately every single time.

There are leaps and stretches that fall into this category, where the finger, the hand, the arm, the lungs or the lip simply don’t have the capacity to produce exactly what a composer has written in the time that’s available. The misdirection of the actor was around the musical moment. But musicians typically change the moment itself by what you might call the momentary dilation of musical time. They rely on what you could call fake rubato, by introducing an expressive hesitation that has nothing whatsoever to do with expressiveness. It’s there merely for safety, a security net to avoid an unpleasant splash or scrape or mis-placed pitch.

There’s organisational misdirection, too. BBC Radio 3 garnered considerable praise for its focus on music by women on International Women’s Day in 2016. The BBC Proms has committed to giving 50 per cent of its commissions to women by 2022. And BBC Northern Ireland last year included works by women in each of its free summer invitation concerts with the Ulster Orchestra.

But the 2019 invitation series, with five concerts between Wednesday, July 31st, and Tuesday, August 13th, features works by women (Elisabetta Brusa and Roxanna Panufnik) in just two of them. This counts as classic misdirection. You set up and get credit for the claim or the achievement, and when you do it again you don’t follow through. Magicians love to have you believe they’re doing the same thing twice, when of course they’re not.

Even the National Concert Hall’s female concert series has a similar function. It serves to distract from how poorly music by women is represented elsewhere in the hall’s own promotions.

I could go on. But I’m sure you’ll have no trouble finding examples of your own.