Dead Dog in a Suitcase: High-octane theatre for turbulent times

Kneehigh’s reworking of The Beggar’s Opera tale of corruption, ineptitude and irresponsibility is coming to Galway 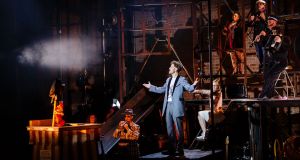 “What’s the world coming to?” The trite and tired phrase takes on urgent meaning in Dead Dog in a Suitcase (and Other Love Songs). But “you can’t blame the world. We make the world. We decide for ourselves.”

This reworking of The Beggar’s Opera, by legendary Cornwall theatre company Kneehigh and a highlight of this July’s Galway International Arts Festival, is angry, skilful, beautifully written, exuberant and anarchic musical theatre. It is also unashamedly theatre with a message, and very much for this startling, unravelling world we’re in.

The action on the busy, scaffolded set starts with assassination of Mayor Goodman (and his dog), one of the good guys in an amoral Gotham-esque city. The hit, ordered by a rival mayoral candidate and his wife, sets off a series of interlocking plots.

Writer Carl Grose describes the world of this anarchic musical as one of “archetypal antiheroes, shadowy business, sexually deviant politicians, corporate conspiracy and chicanery. Here, desperate souls are forced to make a killing alongside big businesses, who are the ones actually getting away with murder”.

This tale of corruption, ineptitude and irresponsibility involves crazy plot twists, intrigue and mystery, suitcase mix-ups, twisted romance and double-crosses, and a rollicking hybrid of a score.

Grose is chatting in the Lyric Theatre in Hammersmith, London, the morning after the house erupted after last night’s show. There’s an appropriateness to its Lyric run, as it has a historical link with John Gay’s 1728 original. The riotous ballad opera turned the conventional upper-class genre upside-down, setting it among the low-born of London’s criminal underworld, combining bawdy comedy and political satire and subverting operatic form with popular songs and scabrous ditties. It was hugely popular in 18th-century Britain but later fell out of favour. Nigel Playfair’s 1920 revival of The Beggar’s Opera at the Lyric gave it a new lease of life, and, says Grose, “put the Lyric on the map and made its reputation”.

As for the quirky and rambling title – Dead Dog in a Suitcase (and Other Love Songs) – of his version, Grose references the New York myth which has become a meme. “Our version of The Beggar’s Opera feels like modern folklore too. John Gay’s original take was highway men and prostitutes, street thieves and corrupt officials. Our version is about the mystic underbelly of now.”

Composer Charles Hazlewood approached Kneehigh with the idea of a new way of telling The Beggar’s Opera, mixing anarchy and playfulness. Grose wrote the script in 2012-2014, working along with director Mike Shepherd and Hazlewood, and in workshops with actors. At that point the world was in the midst of financial disaster and austerity. But when he looked closely again at the script for this incarnation, remarkably, Grose realised nothing really needed changing for 2019. Dominic Marsh, who plays Macheath, the charming villain at the centre of the tale, talks about its timeless quality. “It can never be not relevant. Yes, it happens to be Brexit and Trump now, but when we did it three years ago we were still post-credit crunch.”

Dead Dog is “more of a morality tale” than Beggar’s Opera, Grose observes. “Originally Filch [in Beggar’s Opera] is horrible, with nothing to redeem him,” but here he’s more rounded, with vulnerabilities, and Macheath too, the sexy and beguiling villain who ducks and dives, also has some subtlety to him.

And then there’s the music. Hazlewood writes about Gay’s “always specific” use of music, to drive his message home. For example, at the climax when Macheath is about to hang and he takes “the most iconic and aristocratic of English folk tunes, Greensleeves, and screams out the moral of the piece over it: that if the rich were to hang for their crimes as well as the poor, there wouldn’t be a person left alive in England”.

Instead of reviving it as a charming museum piece, Hazlewood decided it needed music “which does exactly what it did in Gay’s original, that is to plunder the sounds of now [as well as the elegant trappings of then].” And so his “mongrel score” churns up “electro disco, new wave, grime, dubstep, noire, trip hop, punk, ska, as well as 18th-century counterpoint and the great [Henry] Purcell”, to create a “cacophony of infectious ditties” for today’s unbalanced times.

It makes for a thumping, thought-provoking angry, whirl of a production, that thrills and amuses and incites.

Kneehigh has shaped Grose’s life. He grew up in Truro, Cornwall, with the company Shepherd founded on his doorstep. “Everyone knew Kneehigh. I forget how lucky we were to have this company doing exciting, crazy, accessible theatrical storytelling.” He jokes about his earliest Kneehigh “performance”, which involved loudly opening a can of Tango in the audience.

The young Grose became “a bit of a Kneehigh obsessive”. At 16, studying theatre at A level, through a nationwide Royal Shakespeare Company youth theatre project he met Shepherd and the late Cornish playwright Nick Darke, who offered him a part in a show. “I was incredibly shy and didn’t speak at all, but they made me be in it. Meeting Mike and Nick changed my life.”

They later became mentors, and Grose is now Kneehigh co-artistic director with Shepherd (“he’s a bit of a begrudging artistic director!”). Grose joined Kneehigh at 19 as an actor, and now writes for them, as well as for other companies.

Here, with Dead Dog, he finds himself writing for Kneehigh actor Giles King, who plays Colin Lockit, “writing a part for the godman, it still blows my mind. I’m writing for my theatre heroes.”

Kneehigh, which grew organically from a theatre-in-education company, will be 40 years old next year. “It’s survived because of Mike’s spirit and energy, and his passion. I don’t know of many theatre companies that old still making work like that,” says Grose.

Dead Dog’s first performance was in Liverpool, and the audience ended the show cheering, recalls Grose. “It was an insane experience, an amazing night at the theatre.” Angela Hardie who plays Polly Peachum, has toured with it to Shanghai, Colombia and New Zealand, and says “and it went down so differently in those cultures. In Colombia, they’re dealing with assassinated politicians all the time. We arrived in March, and 16 politicians had been assassinated already that year. Dead Dog opens with the mayor being shot, so they completely saw a reflection of their world. And the way they celebrate you is so different – it’s all shouting, throwing bottles of beer on the stage, as a way of saying thank you. It was the total opposite in South Korea, where audiences were reserved and respectful. The piece is a dark comedy and they didn’t really laugh at the jokes during the show, but at the end they just loved it.”

Grose’s first draft had 45 songs, including “bits of songs and poetry to music”, but “some of the songs I’m most proud of were written in rehearsals”. He mentions Money, “where they stop being the characters and just sing about money. It was always right on the verge of being cut, but it’s kind of thematic, you get to hang out in what they’re all thinking. We loved it so much and it feels right to have it in.”

They’re looking forward to coming to Galway, and Marsh, who was at the arts festival with Kneehigh’s Tristan & Yseult in 2017, has resolved to find good folk music when they’re not performing. Hardie says: “The company is so lovely, we all get on like a house on fire, and there’s an absolute sense of a cathartic treat that we get to do this, especially right now. Like our drummer said, this show is like thunder to a heavy heart.”

The fast-moving, raucous and hugely entertaining show is exhilarating to watch, engaging the head and the heart, so being on stage must be a blast.

“To do this show is ridiculously high octane,” says Marsh.

Dead Dog in a Suitcase (and Other Love Songs) is at Galway International Arts Festival, July 16th-20th giaf.ie