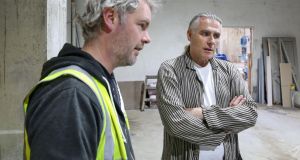 All cities have hidden spaces that few people know or think about much. Bang in the middle of Galway city, invisible behind the junction of William Street and Eglinton Street, who’d have thought there would be such a treasure – a vast, unused, empty space that has over the past couple of months been transformed into a mini-cathedral of light and height and soon to be visual art, as it becomes a gallery for the 2019 Galway International Arts Festival.

Outside, you approach via a laneway off William Street, between a pharmacy and a shoe shop, behind the bronze sculptures of Oscar Wilde and Eduard Vilde. The exterior is strikingly modernist, with nine porthole-style windows high up on the wall.

Festival artistic director Paul Fahy is standing in the middle of the work-in-progress, looking at a new – temporary – gallery emerging from decades of decay, and reckons the transformation is a work of art in itself, on a brownfield gap in the centre of the City of the Tribes. It’s one of a network of buildings owned by An Post, behind the post office on Eglinton Street, which includes the old sorting office.

An Post has made 640 sq m (6,888 sq ft) available to the festival this year. This particular building was once the city’s telephone exchange, storage and a garage, and has not been used in decades. Fahy says they’ve had great support from An Post locally and at head office: “They’ve been a total joy to deal with along the way, hugely facilitating and supportive of the project.”

An Post is delighted, a spokeswoman said, “to have been able to help out the festival this way, and the company is always open to working with local arts and community organisations”.

Led by festival production manager Adam Fitzsimons, when the build team – joiners, builders, plasterers, painters, roofer, electrician, plumber – got to work, they started by pulling down the false suspended ceiling, to reveal a surprise: a soaring roof and pitched glass rooflight.

Visiting at the beginning of week five of an 8½- week refurbishment, things are taking shape. Roofer Mike Regan fixed leaks where water was flowing in and down the walls, and replumbed the drainage flow. He removed trees growing in drains on the roof (counting 23 or 24 rings of growth). As well as rewiring, the interior walls have been repaired, faced with plasterboard and plastered. Fitzsimons enumerates: 412 sheets of plasterboard; 150 bags of plaster; and 700 square metres of wallspace to plaster and paint. All the wood used was recycled from the dismantled ceiling.

They’re leaving the concrete pillars exposed (“a bit of brutalist architecture” says Fahy); the structural engineer observed the concrete was particularly solid, and speculated there was once a plan to put a mast on top of the building.

The metal entrance is being replaced with eight-feet tall early-20th-century wooden doors that will open concertina-style. The fine doors, complete with vintage hinges and fittings, which Fitzsimons found on Done Deal, are from an old garage, on Kildare Street in Dublin.

The gallery space will house the centrepiece of the festival’s visual arts, In The Flesh, large hyperrealistic sculptures by contemporary Australian sculptor Sam Jinks. A series of divisions will create areas to lead visitors through, while managing crowds; last year, the festival gallery had 3,000 visitors on some days. Off the main larger space is an annexe, to locate Jinks’s spectacular The Messenger, which includes a 13.7 metre-long pool.

This is not the first time the arts festival has magicked up a massive gallery. Previous short-term galleries include McDonagh’s hardware shop on Merchant’s Road, the former Atlantic Homecare in Galway Shopping Centre, a large retail space opposite the bus station, and for the past few years, the former Connacht Tribune printworks on Market Street. These were all borrowed spaces which sometimes the festival – and others in Galway, including Tulca visual art festival, Macnas, Babaro children’s festival – got multiple use from, before the ongoing march of development claimed them back. Last year’s gallery at the printworks is now part of a boutique hotel development.

Bringing disused buildings up to standard, again and again, requires energy, money and imagination, and the festival doesn’t know from year to year whether it will get ongoing use from the investment. The cost of this year’s transformation is put at€50,000.

The An Post property was likely built in the 1950s, Fahy says, and intriguingly, it has form, culturally: in the 1920s the Empire Theatre was on the site of today’s temporary gallery. The New Galway Cinema Theatre, a former skating rink converted to show films, opened in 1912, with upholstered tip-up elbow chairs. It was the Gaiety Cinema from 1917 and the Empire from 1919, managed by Walter McNally, changing back to a skating rink in 1937. Fahy is tickled by the thought of a 1,050-seat “thoroughly ventilated” (according to records) venue on the same spot, “and here we are nearly 100 years later calling for a decent cultural hub/gallery/venue for Galway”.

An Post is a State company, but it’s a commercial State company, and there’s no guarantee the space will be available after July. An Post confirmed to The Irish Times that the complex, including the public post office and the festival temporary gallery building, will go to market before the end of this year. Deals to sell the An Post buildings fell apart at a late point twice in the past, in 2008 and 2013.

The situation points up the lack of a municipal contemporary art gallery in Galway, known for its cultural richness. It’s been a need for years, highlighted annually when the arts festival has had to create a series of temporary gallery spaces, each time involving considerable investment. The imminence of Galway 2020 City of Culture, just over five months away, makes the city’s lack of cultural infrastructure more acute. There’s also an acknowledged need for a creative hub space, for rehearsing and developing arts projects; the push is backed by the recently-formed Theatre 57, a collective of Galway theatre artists co-founded by Róisín Stack.

A gallery is now “firmly on the city’s agenda”, says Galway City Council chief executive Brendan McGrath, who also acknowledges the need for a creative and production hub. The council will consult artists and organisations in August to prioritise needs. “We can’t do everything at once, but the provision of a modern, fit-for-purpose contemporary visual art space is close to the top” of priorities, he says.

He points out the Urban Regeneration Development Fund offers opportunities under Project 2040, but the city will need to find matching funds. So it’s a while off yet, and could take between two and a half and five years, because of planning and procurement, he says. To open a gallery within three years is “achievable”, but with a caveat, says McGrath: funding and planning.

Though he says “I have greedy eyes!”, the city chief executive won’t be drawn on where the council may have in mind for a gallery. But aside from the An Post buildings, other possibilities include university property in Nun’s Island and land behind Ceannt railway station.

In the meantime, Fahy is excited watching the new space imaginatively unfold, to house a world-class show. He hopes the festival won’t stop “finding and transforming buildings into cultural spaces”, but he laments “the poor infrastructural facilities in a city with such a strong sense and celebration of culture”.

“It would be great to think the legacy of this investment would be a permanent home for visual art,” he says. “I often feel like a scratched record saying this, but regrettably we need to keep saying it until we find a permanent space.”