Joan as Police Woman: ‘I don’t measure anything by No 1s’

Joan Wasser has no regrets about delaying her solo career until into her 30s. But as she releases a 'Best of' collection, the Connecticut songwriter is looking forwards, not back 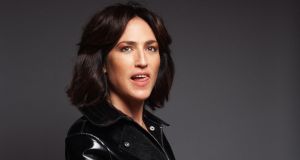 Joan Wasser, aka Joan as Police Woman: I feel really thankful that I made it into my 30s before beginning. Photograph: Allison Michael Orenstein

Regrets? Joan Wasser’s had a few – but one of them is not kicking off her solo career sooner. Although she has played violin since she was a child, the Connecticut-raised musician was a late bloomer as a songwriter, at least by today’s standards.

The woman behind the Joan as Police Woman moniker spent most of her 20s and early 30s performing in other people’s bands (Rufus Wainwright, Antony & the Johnsons among them) before she put pen to paper. Now 48, her larger-than-life personality fizzes down the phone line from New York as she contemplates striking out at a younger age. “Definitely not,” she says, bursting into an infectious machine-gun cackle. “No way.

“I really didn’t have anything to say, and nothing that I would have wanted recorded and released. I feel really thankful that I made it into my 30s before beginning. If I was writing songs any younger than that, I think I would have regrets and I probably would feel embarrassed.

“I played violin for a really long time in bands, and had no interest in singing; no interest in writing songs. But a big part of that time period was about learning how music works, playing with a ton of people and learning about what I liked arrangement-wise and stuff. Until I got to a place where I wanted to do it myself, and had some idea of what I wanted, I wasn’t ready for it.”

Thankfully, Wasser eventually made the leap to solo artist and the fruits of her labour are now available in a neatly bundled package dubbed Joanthology. It’s her first “Best Of” collection that spans the 15 years since her self-titled solo EP was released, but Wasser admits that it took some persuading for her to release it.

“I wasn’t certain that it’s the right thing to do, because I feel like I have so many more records in me. My thoughts are just always make a better song; I don’t personally really think about much else,” she laughs.

It was like pulling teeth; I actually had to just look away and pick at one point

“But a number of people had suggested that I put together some sort of collection or anthology. Enough people said it from different parts of my life that I actually started to consider it. So when I was booking this extensive solo tour, I thought it would be nice to have a road map of my songwriting life for people who were interested.”

If Joanthology teaches us anything about Wasser, it’s that she has been a quietly diverse songwriter over the course of her seven studio albums. Each release, from considered full-length debut Real Life to the Motown-inflected The Classic, incorporates both subtle and dramatic shifts in style. However, that medley of sounds was also the source of a major headache when it came to selecting a tracklisting.

“It was horrible,” she yells. “Yeah, that was really not fun for me. For instance, I wanted to put the last song from each album on the compilation, because the last song is always very important to me, and I feel like a lot of people don’t hear the last song on a lot of records. But then that takes up too much space, because they’re often long songs. So I hated it and I did need help from my manager. It was like pulling teeth; I actually had to just look away and pick at one point.”

Unsurprisingly, she refuses to choose a particular album or song that means more to her than the others.

“No. I’m sorry, no,” she titters. “I mean, I guess I tend to like the most recent thing I did, in general; I think that’s true for most people. But each album and song just really feel different and necessary. Obviously my first record has a lot of meaning for me, because it was the one that people heard first and said ‘Oh, this is worth listening to.’ But other than that, it feels like how do you choose memories. They’re all important, and they all highlight one another in ways that matter to me.”

Wasser has always been a prolific collaborator; this collection includes songs performed with the aforementioned Rufus Wainwright and Anohni (both of whom she remains firm friends with) as well as Okkervil River guitarist Benjamin Lazar Davis, with whom she released a collaborative album in 2016. She also recently played live with Damon Albarn’s Africa Express project in London.

“I see it as absolutely, 100 per cent selfish,” she says of her willingness to share her songbook with her fellow artists. “When I play with other people, I get so into how they interact with music, which enhances my life so much. Collaborating is just like free school – and you also learn more about who you are as a musician. Staying open is so important to me. And then often, at the end, there’s a song or music made that would never have happened if I wasn’t willing and able to put myself in a situation that was new. So it’s definitely one of my favourite things on earth.”

I just want to keep writing songs. And people keep coming to the shows, so it feels like I’m doing something right

Although she is currently undertaking an extensive solo tour with these songs, she says she has already started work on three new musical projects. One of them is another covers album, a sequel to 2009’s Cover; indeed, Joanthology includes her versions of Prince’s Kiss and Talk Talk’s Myrrhman.

“I’ve been working on the second covers album for many, many years,” she says. “Ever since I put the first one out in 2009, pretty much. I have a lot of tracks partially recorded in different forms. So I have made some progress, and I’d really like to get it done because I like finishing things. So I’ll be working on that continuously. I’ve also started writing my next Joan as Police Woman record, so that’s in the works. And I have another Benjamin Lazar Davis/Joan as Police Woman record, too; actually, quite a bit of that is written and a lot of it is recorded as well. So... three records in the works. Yeah! But that’s how I like it.”

Despite critical acclaim and a fiercely loyal fanbase spread around the world, the word ‘underrated’ continues to prefix Joan as Police Woman. Even so, Wasser is not bothered by other people’s perceptions of her – nor does she necessarily have aspirations for things like number one albums.

“Y’know, honestly I just want to keep writing songs,” she says, sighing good-naturedly. “And people keep coming to the shows, so it feels like I’m doing something right. I don’t even know what number one means any more. When I was growing up, it meant something – but I don’t know what the template is for number one any more. I’m not doing pop music, and I hear what that sounds like coming out of people’s cars, and stuff, and some of it, I really actually like. But I just want to keep writing better songs. So I guess the answer is that I don’t even know what that means any more, so I don’t measure anything by it.”

If she has learned anything over the past 15 years, she claims, it’s mostly that being comfortable in your own skin is just as important as ambition, creativity and success.

“I am absolutely where I wanna be,” she says firmly. “I mean, I’m in a state of shock, pretty much, that I’ve released this many records and that I’m making music; it’s more than I ever could have imagined, honestly. I’m so thrilled. Doing this anthology and being forced to look back – because that is not something I naturally do – has certainly shown me that I have made some music that I’m really proud of. And that’s a really nice feeling. So I’m gonna try to make the second one in less than 15 years, how about that?”