Kojaque: Dublin hip hop from the belly of the deli 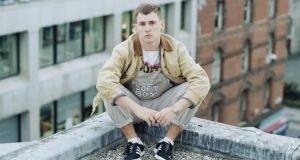 In appraising Jamie xx’s In Colour in the New Yorker in 2015, Hua Hsu wrote that the Londoner was “tracing the contours of someone else’s memories”, regarding Jamie Smith’s vivid but touristic references to a rave scene that had dissipated before Smith and his band had composed the notes to Intro.

Another Smith, Kevin (aka Kojaque) has constructed a different sort of hauntology that seems less concerned with history and more with identity. Kojaque’s nostalgia is not for lost futures, but for lost selves.

The Dublin MC’s latest project, a concept-album-that’s-not-an-album, is DELI DAYDREAMS and follows a week in the life of a deli worker, delis being something of a great mundane leveller in urban Irish life. Characters and their perspectives populate Kojaque’s work across tracks, music videos and other film projects.

While the temptation with the conceit of a deli worker’s diary would be to emphasise the literal, and come up with a collection of songs called, I don’t know, Spicy or Plain or Cut In Half?, Kojaque, from Cabra in Dublin, does not do dress-up or alter-ego. There is no “working at Burger King, spittin’ on your onion rings.”

This is an artist who comes at things from an angle, veering away from the obvious and embracing an abstract and sometimes avant garde approach that has grown increasingly sophisticated since he dropped Sunday Roast two years ago, a bunch of tracks that nestled among the countless online releases made by a generation of burgeoning MCs, animated by the breakthrough of Odd Future, the hip hop collective formed by Tyler, The Creator in about 2006.

At Kojaque’s studio space in the Royal Hibernian Academy, the brilliant young painter Eve O’Callaghan (who has a neighbouring studio) knocks by to retrieve a hammer. Kojaque is here because in 2017 he was the recipient of the RHA Student Graduate Award. After studying fine art in college, he made his graduate piece, Love In Technicolour, a 17-minute-long film which was also selected to show at the RDS Visual Arts Award show last October.

Reviewing the work, Irish Times visual art critic Aidan Dunne, wrote: “Among the stand-outs was Kevin Smith who, it’s fair to say, was the smash hit of this year’s DIT Creative Arts show. His film Love in Technicolour incorporates elements of performance art and cinematic narrative in probing the construction and enactment of masculinity in society. It has a raw, visceral energy, enhanced by an integral spoken soundtrack delivered with poetry slam gusto.”

Kojaque recently released two music videos as part of DELI DAYDREAMS. One, for Bubby’s Cream, was recorded in a shopping centre carpark in Cabra, during which Kojaque and his film-maker friend defused an attempted mugging. The second, White Noise, is less tune more poem, and is dedicated to Paul Curran, the young spoken word artist who died recently.

These tunes are growers, with layers revealing themselves upon repeated listens. The cadences of Bubby’s Cream embed themselves in your brain. White Noise touches on bodily autonomy and slams the coldness with which police and society deal with its young male character.

“I used it as a crutch to manoeuvre between different issues that are going on in Dublin and Ireland at the moment,” Kojaque says of the week-in-a-life concept. “It’s more political than I’m used to being.”

There are Kurt Cobain-isms (“what I like best about myself is I detest my f**king self” on Love & Braggadocio), the intimacy of snatched fragments of conversations and everyday sounds moulded to fit the narrative.

White Noise opens with what sounds like the static from a radio, and ends with a radio news report and the sound of a car seatbelt alarm. Love and Braggadocio features the crack of a can. There’s an interlude of a supermarket tannoy announcement. These creative decisions call to mind his 2017 oddball track, Wifi Code, which began with the sound of a dial-up modem – that’s retro for twentysomethings.

As a teenager, Kojaque was more into indie music, particularly The Maccabees, before his love for the band waned. In the run up to attending the Oxegen festival for the first time in 2011, a friend alerted him to the video of Tyler, The Creator track Yonkers. “I had just never seen anything like it,” he says. In the video, Tyler bites into a cockroach, gags, and then stages a mock hanging of himself. Six years later, there is a Yonkers echo of sorts in Love In Technicolour, where one scene features Smith in a laneway pounding can after can of lager until he vomits.

Tyler, The Creator’s Odd Future had that rare cultural impact where everything consciously trying to be cool in the concurrent culture felt immediately passé.

“I got super obsessed with Odd Future and the whole thing. It just really seemed like it was so easy, like anyone could do it. So I started doing it, started writing, trying to produce, and you quickly learn that it’s really not that easy at all and these people are very talented, and not only that, they have a big team behind them.”

As a child, Kojaque made films in his house with a camera his father had bought. On Wednesday afternoons, he and his three brothers’ friends were invited around, and Smith would try to recreate from memory films he watched in his friends’ houses. He got really into it, until “that thing where you get to secondary school and the stuff that you’re really into, people just make shit of you for . . .

“I don’t know, I think I’d be quite susceptible – I’m not as much any more – to people’s opinions and that sort of thing. The slightest comment about something you just had fun making with your mates just used to set me off. I took them all down, got rid of them, didn’t look at them for ages.”

That susceptibility to criticism meant it took a while for him to share music he was making. He remembers a point where he hated rap because guys in school he didn’t like were fans. “It used to be these really super macho guys, and they used to have pictures of 50 Cent with his top off in their bedrooms. So homoerotic yet super homophobic. That kind of paradox used to amuse me.”

The first person Smith rapped to was Kean Kavanagh; they set up Soft Boy Records as a base for their and others’ releases. “It’s kind of like a pseudo third party,” Smith says of Soft Boy Records, saying the platform of a label gives the music a sense of legitimacy. “It seemed better to have something come out under Soft Boy Records than it did like ‘here’s my song that I made in my bedroom’.”

As appreciation for Kojaque’s output increases, he wonders whether the growth of hip hop in Ireland has something to do with “how willing people are to put themselves out there in the world”.

“There’s always that weird thing that the Irish mentality doesn’t really lend itself to hip-hop in the traditional sense of braggadocio. We’re very self-deprecating people. Stuff like that has changed . . . If I could just do this full-time and not have to worry about money or anything, that would be a goal. I really like the work, and that’s all that really matters.”

Béla Bartók: how music broadened the mind of a ‘nationalist’ composer
6