‘We are hoping for big things from them,’ choir director says of students aged 9 and 10 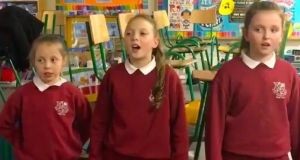 Amy Flanagan (9), Bridget Kerrigan (10) and Katie McNamara (10), who are in fourth and fifth class at the Corpus Christi primary school in Moyross.

A video of a Co Limerick primary school choir has gone viral after being viewed over 180,000 times on Facebook.

The video features choir members Amy Flanagan (9), Bridget Kerrigan (10) and Katie McNamara (10), who are in fourth and fifth class at the Corpus Christi primary school in Moyross.

They are seen giving a powerful rendition of the Andra Day song Rise Up.

Doireann Wylde, who runs the choir alongside teacher Orfhlaith Prendergast, says she was not surprised with the reaction to the video.

“I wasn’t one bit surprised, these are really talented kids...we are hoping for big things from them,” Ms Wylde told The Irish Times.

The popularity of this recording is quite an achievement for the school as the choir has only been up and running since September.

“ Singing and music has always been a big part of life here but we didn’t have a full weekly choir until this year. I had worked with them on and off for over seven years at communions and confirmations, and this year we said there are definitely talents here that need to be nurtured.”

The choir, which has 35 children in total, now meets every Tuesday evening after school for an hour and a half of rehearsals.

The Moyross choir recently took part in the Peace Proms at the RDS which saw 2,500 children join together in the Cross Border Orchesta of Ireland.

“The children were so appreciative for being there, one of them bought us (the teachers) sweets with her pocket money to say thank you!”

Gemma Sugrue, a vocal coach who has worked with Jenny Greene and the RTÉ Concert Orchestra, will be holding a workshop with the Corpus Christi choir this year so that “they learn proper vocal technique and vocal science,” Ms Wylde says.

The success of the choir is something they are very proud of, Ms Wylde says, because “Moyross is not always associated with positive things”.

“Music is a massive outlet for these kids. They are so good I want to make sure they have all the support they need.”