‘Is opera an Irish artform? Of course it is’ 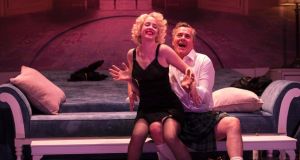 A performance of Thomas Adès’s ‘Powder Her Face’

There is history in the Irish National Opera’s name, and that history tells a lot about the troubled history of opera in Ireland.

The first Irish National Opera (INO) company ran from 1965 to 1984 and specialised in productions that toured with only piano accompaniment. The second Irish National Opera company was announced in 2009 when Martin Cullen was arts minister. International consultants advised on the setting up of the company and a general director was recruited. However, it was shut down by minister Jimmy Deenihan in 2011 without ever having presented a single production.

The latest incarnation, with Fergus Sheil as artistic director and Diego Fasciati as executive director, is the outcome of an Arts Council-initiated process to restore a regular supply of natively-sourced productions of mainstream repertoire to large stages in Dublin and regional centres.

INO combines small-scale touring (23 performances are planned for 2018) with performances in large Dublin theatres (12 this year), one of which will also visit the National Opera House in Wexford, and visits to Cork will be added in future years. 2018 will also see three performances of Donnacha Dennehy’s The Second Violinist in London next September.

What are Sheil and Fasciati’s views on the current state of opera in Ireland? “I think we are at a renaissance point for Irish opera,” said Fasciati. “Both because of how opera is funded in Ireland – which hasn’t quite worked – and because some opera companies have closed in the last decade and haven’t really been replaced, and because the Arts Council has been trying to deal with that. Now we’re finally at a point where there is a resolution to all of this. The resolution is Irish National Opera.”

Fasciati feels “the point of renaissance was the rediscovery of Eithne”, Robert O’Dwyer’s Irish-language opera whose 1909 premiere was supported by Countess Markievicz and Douglas Hyde, and which Opera Theatre Company presented at the National Concert Hall last October.

“It addressed the issue of ‘is opera an Irish artform?’ Of course it is. It’s a European artform. And finally we’re at a point where the structures, the funding and the talent are all coming together.” It is, Fasciati says, “a rebirth of Irish opera.”

“As well as the brilliant singers,” says Sheil, “we have some fantastic composers, writers, and people right across the arts. The more people I talk to who are involved in theatre, dance, film and other areas, the more I realise how they want to be involved in opera. There’s a great hunger, and this is not something I would have seen ten years ago.

“But there’s been a lot of new opera recently, and it’s become a sexy thing, an attractive thing to be involved in making opera. There’s a momentum. And internationally, when I talk to people they are aware of the contemporary opera that’s happening in Ireland.”

Of course, it’s not all roses, says Fasciati: “The weakness is really the lack of funding. We are very grateful to the Arts Council for the robust funding we have from them. But compared to other opera houses in Europe, and I’m not even talking about the big ones, they are funded to a much higher level. But we will be clever in how we use our resources and we will still deliver world-class opera in Dublin and around the country.”

Sheil points to the lack of infrastructure in Ireland as a double-edged sword. He sees it as giving a certain freedom in terms of the adaptability of the company, but “there’s no developed infrastructure around conducting, around répétiteurs, around language coaches, specialised early music or contemporary music singers. When you speak to somebody abroad and you realise they’re specialists in just French baroque opera, you just couldn’t live in Ireland with that kind of specialisation.”

“We will be touring across Ireland,” says Fasciati, “so that you don’t have a kind of other company that does the touring in the regions. Irish National Opera will do it all, as a national company which truly belongs to everyone.”

Another important opportunity, Fasciati says, “is to cultivate Irish talent in all the elements of an opera production, whether that’s design or directing. That’s an area where there needs to be development, because directing opera is quite different from directing theatre. The opportunity is there now to build a brand to make an impact nationally.”

Sheil sees the merger as creating “a great opportunity for engaging with audiences”. He himself came from a musical background, “but I didn’t come from an opera background. I kind of fell into opera by accident and became really passionate about it. But that doesn’t happen to 99.999 per cent of people in Ireland.

“We have the opportunity and the responsibility to make our opera accessible, affordable, available geographically, to create outreach projects, education projects, to get young people in to see dress rehearsals or to get involved in different ways.”

He’s also excited about the company’s digital presence and engaging with people “beyond those who physically come into a theatre”.

INO has come into being at a time when there are huge uncertainties about the continued existence of two orchestras in RTÉ, which is a concern for Sheil:

“If we want to do some of the bigger repertoire like Wagner and Strauss – which are in our medium-term plans – we’re going to need big orchestras. And the collaboration we’ve had between both previous companies and both RTÉ orchestras is something we have valued. The response to the orchestral situation needs to deal with much more than RTÉ. We’re just one organisation for whom this could have significant ramifications.”

Sheil thinks one of the biggest challenges for opera in general is people’s attention spans, “the way that the range of things to do with your spare time has grown and your available spare time has shrunk. It’s just a fact of life. People have busier lives and longer commutes.

“Will people still want to spend three hours sitting in a theatre when they can watch a Netflix episode on their phone for half an hour?” He answers it himself:

“I do believe the experience of coming together with an audience to share something communal through a live performance in a theatrical space has a spine-tingling effect that can’t be fully reproduced in any other way.”