Opinion: Guitar music is no longer central to youth culture. Wake up and smell the r’n’b 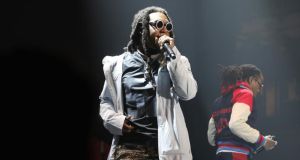 Underdog rhymers such as Atlanta’s Migos broke out of a regional scenes to build an international fanbase. Photograph: Jerritt Clark/Getty Images for Rolling Stone

A great cry of anguish rang out last week as it was revealed that the Longitude music festival is going exclusively hip hop and r’n’b in 2018. Not a single banjo will be strummed in anger at the south Dublin event, a perusal of the preliminary line-up suggests. Guitars are to be thinner on the ground than Victoria Beckham on a Spice Girls tour bus.

In certain quarters this has provoked disbelief bordering on apoplexy. A mere 12 months ago Longitude invited mutton-chopped waist-coat advocates Mumford and Sons to curate an entire day’s programming.

In 2016, the festival was headlined by The National – the rock’n’roll equivalent of an artisanal dinner party. Whelan’s – spiritual home of bearded songwriters blubbing into their jumpers – once sponsored a stage.

This year, by contrast, the bill is dominated by what Americans would call “urban” artists. Atlanta rappers Migos, Beyoncé’s little sister Solange and Travis Scott, boyfriend of Kylie Jenner are among the big guns who will blast their grooves over leafy Marlay Park.

Going by the backlash online, it’s as if Electric Picnic had re-designated itself a ukulele-exclusive event or Croke Park announced it would henceforth only stage competitive lawn bowling.

But the biggest surprise, surely, is that the festival’s embrace of hip-hop and r’n’b could be considered a shock. As anyone who witnessed Kendrick Lamar’s knockout first date of the European leg of his Damn tour at 3Arena last week will testify, hip-hop is no longer a niche genre. Far from encroaching on the mainstream, today it IS the mainstream.

Consider that in 2017, hip-hop overtook rock for the first time to account for 25 per cent of the retail music market, against rock’s 23 per cent. That same year, the audience for rap on the streaming site Spotify boomed by 74 per cent.

When Taylor Swift’s Look What You Made Me Do was toppled from the top of Billboard Hot 100 after three weeks last September, the usurper inevitably turned up to be an r’n’b track, Cardi B’s Bodak Yellow (yes, she’ll be at Longitude too).

Hip-hop’s rise is bound up with the convulsions the music industry has suffered across the past 10 years as CD sales have collapsed. “The problem now is that, even if you get a record deal, you don’t get any money,” Chris Wolstenholme of the rock band Muse told me in 2016. “Part of the appeal about wanting to be an actor or a footballer or a rock star is that you get to be rich and famous. Well, in music now, you have to take the ‘rich’ bit out of it. “

Yet even as shifts in the way we consume music were proving detrimental to rock’n’roll, it opened the world to hip-hop and r’n’b. Singles and mix-tapes have supplanted the long-play record, while influential playlists such as Spotify’s RapCaviar – nine million subscribers and counting – have allowed underdog rhymers such as Atlanta’s Migos to break out of regional scenes and build international fanbases.

Rock isn’t completely defunct. The night after Kendrick Lamar “slew” – as the kids might say – at 3Arena, tall-haired Dublin trio The Script settled in to the venue. Ed Sheeran is the most streamed artist on Spotify and will play an extraordinary nine arena-scale dates in Ireland this summer.

But if guitar music isn’t quite six feet under, nor is it any longer central to youth culture. Sit behind a young person on a bus with their music turned up too loud, and chances are that it will be hip hop or r’n’b bleeding from their headphones.

Rap is where the zeitgeist resides, and if the Longitude 2018 line-up comes as a shock it’s because you haven’t been paying attention.

The Crown and the assassination of Lord Mountbatten: fact or fiction?
7