Hozier in Dublin review: One song elicits a cheer like no other

The show begins and the 3Arena roars ... Crowds don’t get much friendlier than this 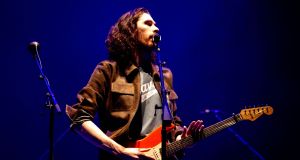 It has been a banner year for Hozier. In March, his second album Wasteland, Baby! shot straight to number one on the Billboard 200 albums chart, putting to bed any fears of a second-album slump. Not only that but it placed him among an elite group of Irish artists to have topped the charts Stateside.

Since then, he has been busy touring across north America and Europe, making pit stops at summer festivals and late-night talk shows along the way.

With 2019 drawing to a close, he is back on home soil to perform a pair of sold-out shows in the 3Arena.

The show begins and a roar goes up as the Wicklow man launches into the gospel-tinged Nina Cried Power. An ode to the power of protest, the screen behind him plays footage from both historic and contemporary protest movements, including the recent campaign to repeal the eighth amendment to the Irish constitution.

As far as an opening number goes, it’s undeniably rousing and helps set the tone for the remainder of the evening. From there, he transitions into a fairly stonking rendition of Dinner & Diatribes, which is punctuated by some on stage pyrotechnics. Such flourishes may seem uncharacteristic for Hozier, but tonight’s concert is being filmed and he has brought out the big guns.

In pictures: Hozier
live in Dublin

“It is an unmitigated, immeasurable pleasure to be standing in front of you,” he beams. He is in good form tonight and not averse to plámásing the crowd. “Dublin audiences are the loudest audiences,” he says to the crowd’s delight. Rooms don’t get much friendlier than this.

After cycling through a few crowd-pleasers, Hozier leaves the main stage and migrates to a smaller stage that has been erected in the centre of the floor. It allows him to be closer to his fans and conjures up a sense of intimacy in the otherwise expansive surrounds of the 3Arena.

Here, he performs delicate ballads like Cherry Wine and From Eden. During the latter, red confetti rains down over him as he sings and a sea of camera phones capture the moment. As I cast my eye skyward, I can see a stagehand frantically tossing confetti from a bag. That’s how the magic happens, folks.

With the release of Take Me To Church, Hozier established himself as an artist unafraid of tackling social and political issues in his music. Since then, he has continued to craft consciousness-raising tunes. Like many of his peers, he seems troubled by the increasingly volatile political climate, and much of his audience interaction tonight focuses on the state of the world right now.

For instance, he prefaces Wasteland, Baby! with a cheery riff on the Doomsday Clock. When introducing a new song titled Jackboot Jump, he explains that he leaned into the late Woody Guthrie while writing it, particularly his “evergreen” anthem Tear The Fascists Down. Such a song title may not be terribly subtle, he notes, before adding that the shooting of protesters in Hong Kong wasn’t particularly subtle either. His passion is palpable, his sincerity admirable. It’s in moments like this that Hozier shines.

While the setlist is comprised of songs, old and new, there is one number that elicits a cheer like no other. I am, of course, talking about Take Me To Church. It’s the song that brought him to the attention of the world and set him on the path he’s on now. When the time comes to perform it, he leaves the stage and goes walkabout, shaking hands with fans at the barriers. Meanwhile the rest of the arena sing “Amen!” back at him. Because the world might be on fire, but even that won’t stop us from singing.

Martin Scorsese: ‘Crime is glamorous at first if you’re young and stupid’
9