Spray it, don’t say it: The story of Irish street art 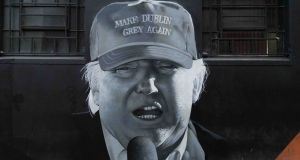 Graffiti has a very deep history, although people tend to paint over it. Jean-Michel Basquiat? Etchings in ancient Greece and Rome? Cave paintings? If your medium is drawing on walls, where do you begin?

In Wonder Walls: The Story of Irish Street Art (RTÉ 2, Monday, 10.10pm), history is less sketched than quickly tagged. “This is the fastest art movement that ever happened,” says Maser, one of Ireland’s best recognised street artists. “I heard someone say it’s more progressive than the Renaissance.” Really? That’s quite a claim to overhear, and though the programme opens with it, no depth is later found (which could never have been said about the Renaissance).

Rather, Ronan McCloskey’s documentary is an admiring snapshot of the sprayers and stencillers working in the country today, filmed with gliding and craning cameras, like an awed passer-by. Its argument is that the progressive politics of its makers are expressed more persuasively in murals than words. In short, spray it, don’t say it.

Maser, best known for Dublin works such as U Are Alive (with the artist Aches), and his heart-shaped Repeal icon (famously removed, in the run-up to the referendum, outside Project Arts Centre), has a pleasing tendency to speak in demotic terms (“whopper murals”) and artspeak (“I would call it abstract typography”).

Joe Caslin, whose haunted pale figures on Dawson Street – two men in a poignant embrace – became an unofficial illustration of the marriage equality referendum, is a soulful, contemplative figure, interviewed while he sketches. His work, often huge in scale, puts intimately private moments on vastly public display. Mental health, drug addiction and equality are among his subjects he says: “nothing that I didn’t live through”.

Both Caslin and Maser, you feel, would have provided enough substance for individual episodes in a series, as would new players like Holly Pereira, whose expressions are more feminist off the wall than on. “It’s extremely hard to control,” she says of spray paint, but traditionally that has been true of street art as a whole. Where is the risk now?

In a survey of Northern Ireland, politics are often painted on walls in less progressive spirit. Belfast’s murals are “a major draw for tourists” we are told, while Waterford Walls, the regenerative street art festival, is portrayed as mostly beautifying. (And, in the case of an older neighbour admiring the mural of the artist Animalitoland as it comes to life, rather touchingly.)

Caslin, readying his first piece for the National Gallery, seems aware of the double-edged sword of street art’s legitimacy: “An art form that has been on the edge,” as he puts it, is now being admitted into the mainstream. Maybe his good regard for Subset, a young group that “survived the recession” and seem comfortable with flouting Dublin City Council’s permission, contains a little yearning for street art’s days of subversion.

McCloskey very earnestly presents Irish street art, increasingly commissioned and sanctioned, as a force for good. When it’s bad, though, it can sometimes be better.

The books quiz: Zadie Smith is married to which Irish writer?
7