Billie Eilish at Electric Picnic: ‘I’m part Irish, dude… This is my home’

Review: The 17-year-old force of nature performs a knockout set 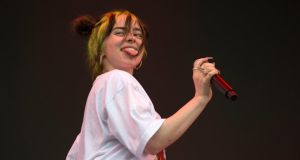 Main stage
★★★★★
Billie Eilish is the pop-star equivalent of Nirvana’s Smells Like Teen Spirit or the opening credits to David Fincher’s Se7en. Her scary, cathartic music has conjured with industrial rock and grunge even as the 17-year-old has emerged as 2019’s heavyweight new chart contender.

Eilish’s already immense drawing power is apparent long before her arrival. It feels as if most of Electric Picnic’s 57,000 or so attendees have gathered around the main stage ahead of her early-evening performance.

Their reward is a knockout turn from the force-of-nature teenager. She materialises sporting dyed green hair and white T and shorts and plunges with the crepuscular synth bopper Bad Guy.

Later, there’s a dash into the crowd for Bellyache, a catchy ballad from the perspective of a serial killer. This is pop with venom in its veins and an undertow of darkness that evokes a chill even on a clement Stradbally evening.

Eilish’s real name is Billie O’Connell, so Irish roots are a given. (Scientists have calculated there’s a 50 per cent chance you went to school with someone named Billie O’Connell.) She of course references this: “I’m part Irish, dude… This is my home.”

But she doesn’t overdo it. Preening isn’t really Eilish’s thing, as she demonstrates sliding into the Nine Inch Nails froideur of her megahit Bury a Friend. Surfing on chain-rattling beats, the track is more than mildly disturbing. What’s truly frightening is how big Billie Eilish could yet become.

Fleet Foxes: ‘I’m trying to find silver linings in this madness, a healing space in music’
7

Rankin: U2’s second-favourite photographer on his brushes with fame
10