Electric Picnic 2019: Jehovah’s Witnesses, Daniel and Majella, and a Child of Prague

If you care about us, God, would you replace the drizzle with an Indian summer?

Electric Picnic began in 2004 as a boutique event, with a capacity of 10,000. Fifteen years later it will accommodate 57,500 people 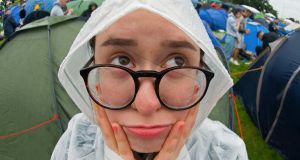 Driving into Stradbally on Friday morning, one is immediately greeted by stand after stand of Jehovah’s Witnesses. They have set up shop at the side of the road, presumably trying to spread the word to the masses descending on the village for Electric Picnic.

Their signs read, “Does God care about you?” If the decidedly meh weather forecast and the grey clouds hanging ominously overhead are anything to go by then the answer is, no, God does not care about us. If he did, he presumably would have arranged for an Indian summer.

As it is, punters are dressed in cycling shorts and ponchos – thereby prepared for all meteorological eventualities – and armed with fully charged phones. “I have a text,” one girl shouts. “Message!” her pal yells, a nod to Ovie from Love Island.

The festival’s early arrivals are largely left to make their own fun until the music gets properly under way, in the evening. A group of youngsters gather outside the Festival Ink tent, which offers temporary tattoos – anything from a shamrock to a Playboy bunny. “Get a butterfly on your lower back, in case you pull!” one young man can be overheard telling his friend. He may not have his friend’s best interests at heart.

Ireland. We had this little lad up here working overtime for the weekend. Can't wait to play @EPfestival tonight, it's so good to be home 🇮🇪🖤 pic.twitter.com/12HPUmL0Dz

Over in Trailer Park people are taking selfies with a life-size cut-out of Daniel and Majella O’Donnell. It stands outside the Vaniel O’Donnell Experience, which its creators describe as “an immersive Daniel O’Donnell superfan experience” set within the confines of a caravan. “It was just a big joke, really,” one of them, Hayley Stuart, says. “It just spiralled out of control, and now we have a caravan full of him.”

Not too far away people take photographs outside a Brexit-themed caravan displaying a “Tiocfaidh Arlene” flag, among other things. Passersby take part in a limbo contest underneath a Brexit Hard Border Limbo sign while a man wearing a blue Lycra bodysuit adorned with the stars of the EU flag looks on.

Speaking of the European Union, over in Mindfield an #EUAndMe installation asks, “What will you do in your own life to make the world a better place?” Underneath is a whiteboard where people can write responses. “Eat less cheese :( ” reads one scrawl. “Save the turdles pls” reads another.

Someone who is thinking of the poor turdles? The enterprising youngsters sifting through bins for recyclables and cashing in empty cups and bottles at the Cup Refund Point: €1 for every five cups handed in. It’s like Greta Thunberg meets Bill Cullen’s penny apples.

As the crowd waits for the evening entertainment to begin, people cram into the Electric Ireland Throwback stage and dance with wild abandon to Superstar by Jamelia. The song that elicits the most shrieks, however, is Come On Eileen. By 5pm throngs of teens and twentysomethings are swaying and chanting the lyrics as though they’re knee-deep in pints at a wedding. “Too-ra-loo-ra, too-ra-loo-rye, aye!”

As the evening wears on, the sun makes sporadic appearances. Proof that God cares about us after all? Perhaps. I like to think Hozier has something to do with it, though. At midday the Bray man tweeted a photograph of a miniature Child of Prague perched on the main stage and wrote, “We had this little lad up here working overtime for the weekend.” Take me to church, indeed.