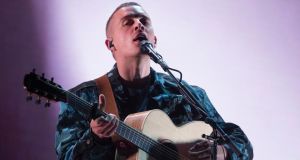 Main stage
★★★★☆
The hit parade of musicians who have graduated from busking on Grafton Street to playing arenas has welcomed a raw-throated new member. Dermot Kennedy is a white-knuckled rasper in the tradition of the heart-on-sleeve truthsayers Damien Rice and Glen Hansard (spied earlier grooving to Billie Eilish).

The difference is that he’s a young man coming of age musically in an era of playlists and genre-splicing. (He shares a manager with Lana Del Rey and Dua Lipa.) So hip hop and soul are part of the weave as he delivers a hard-punching main-stage performance.

Kennedy troops on after the Dundalk singer-songwriter David Keenan and ahead of Hozier. Welcome to the evening Electric Picnic finally achieves peak Irish troubadour. And yet this 27 year-old from Rathcoole, in Co Dublin, is nobody’s soundalike.

His voice, unvarnished though never ragged, is the driving force behind Lost. “The devil hit his second stride,” Kennedy croons against a stabbing white spotlight. His tone confirms that this is on balance a bad thing.

“I played here four years ago to a tent of about 50 people,” he announces. “The year before that I tried to sneak in – and failed.”

The nugget in his pocket is Power Over Me. It’s one of those anthems best sung with eyes closed, head tilted towards the horizon. With Ed Sheeran on open-ended hiatus, there are opportunities for ardent young men with guitars. Kennedy’s chances are as good as anyone’s.