Hansel and Gretel: Flamboyance, playfulness and imagination in INO’s take on Humperdinck

Opera review: Some signals get crossed, but this production aimed both at adults and at children is a really worthwhile venture 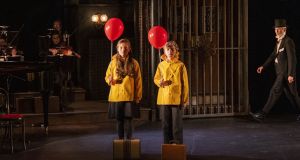 Abbey Theatre, Dublin
★★★☆☆
The Forest Edge Hotel replaces the Grimm fairy tale’s little house, and the children get lost in the Haunted Woods Bar instead of the actual woods, among other adaptations in Irish National Opera’s new touring production of Hansel and Gretel.

Its designer, Jamie Vartan, and lighting designer, Sarah Jane Shiels, give the hotel a slightly gloomy, glamorously down-at-heel prewar look – likewise the costumes – dominated by an old-style grilled elevator plus tawdry neon signs. A small, internally lit mobile kiosk doubles as the hotel reception desk and the food-filled fridge that substitutes for the witch’s gingerbread house. It all looks well.

It sounds well, too, although altogether different without the grand orchestral sweep of Engelbert Humperdinck’s original, Wagnerian score. Instead, Richard Peirson, who directs with lively sensitivity from the piano, has reduced the score to just seven instruments (with upper strings, flute, clarinet and horn), creating a weird but effective blending of German opera with cafe accent. Additionally, the players are on stage, part of the set, donning party hats and eating marshmallows.

Peirson’s ensemble provides an aptly intimate backdrop to the singing. This is led by Amy Ní Fhearraigh, as Gretel, whose nimble physicality animates her presence, such as her understated childish dancing or the moment she is spellbound one limb at a time, and Raphaela Mangan, cheeky and at ease in the trouser role of Hansel. Carolyn Dobbin provides a wonderfully grisly comic highlight as the witch, temporarily recostumed in culinary white and armed with a MasterChef array of cooking utensils as she professes her love of roast children.

The goal is opera that engages both adults and children. Accordingly, there is flamboyance, playfulness and imagination, all enthusiastically generated by Theatre Lovett, coproducers with INO and the Abbey itself, and in their first directorial foray into full-length opera.

Some signals get crossed, such as the puzzling presence of an additional pair of children (real ones, in mute roles) and of a mute night watchman – Raymond Keane’s delightful movement and comic timing notwithstanding – so that a simple tale acquires a slightly misjudged and distracting injection of unwelcome complexity. But overall it proves a really worthwhile cross-company venture.

Runs at the Abbey Theatre, Dublin 1, until Saturday, February 15th, then tours until March 7th

Obituary: Heaney ‘the most important Irish poet since Yeats’