The best traditional gigs in Ireland this week 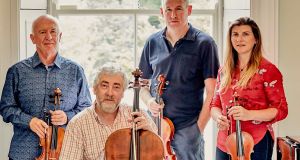 The West Ocean String Quartet: it marks its 20th anniversary this year with a series of concerts celebrating the traditional music of our island’s Atlantic coast

Caitlín Nic Gabhann and Ciarán Ó Maonaigh
The Sea Lodge Hotel, Waterville
This fiddle, concertina and dance duo are guests of this Éigse na Brídeoige festival in south Kerry, where one of our earliest feminists, St Brigid, is remembered and celebrated annually. Nic Gabhann and Ó Maonaigh have a well-established partnership, and know how to allow space and light to suffuse their tunes, with Nic Gabhann’s dance steps lending a percussive force to some that adds further propulsion to their music.

The West Ocean String Quartet
Cultúrlann Uí Chanáin, Derry
Warming up in advance of the release of their new album, The West Ocean String Quartet marks its 20th anniversary this year with an innovative series of concerts celebrating the traditional music of Ireland’s Atlantic coast, echoing the quartet’s title. Their chosen repertoire has been curated from the broad musical spectrum of this region – from the swinging barn dances of west Donegal down to the grand song-airs and rousing polkas of Kerry. Arranged by the quartet’s cellist, Neil Martin, this will be their first chance to perform the music within the coastal communities and islands that inspired it.

Kristyn Fontanella Dance presents In LiMBO
Glór, Ennis
This ensemble of six dancers, accompanied by four musicians interrogate the forms of Irish dance which many feel they already know intimately, in search of new modes of expression. American-born choreographer Fontanella is a veteran of Riverdance and Lord of the Dance.