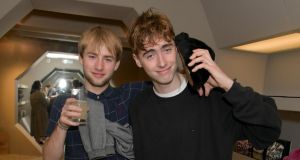 The son of Liam Gallagher and the grandson of Ringo Starr have appeared in court to deny criminal charges over an alleged late-night altercation with staff at a Tesco Express in London last May.

Gene Appleton Gallagher and Sonny Starkey, both 18, and a third defendant, Noah Ponte, who is 19, pleaded not guilty to affray, to using or threatening “unlawful violence towards another” and conducting themselves in a manner that would “cause a person of reasonable firmness present at the scene to fear for his personal safety”.

Ponte denied an additional charge of racially aggravated common assault in the incident, in Hampstead, in north London.

Gallagher, who is the youngest son of Oasis frontman Liam and All Saints singer Nicole Appleton, arrived at Highbury Corner magistrates court in London accompanied by his uncle, Liam Howlett of The Prodigy. Starkey arrived with his father, Jason, whose father is the former Beatle Ringo Starr.

The three parties asked for the case to be sent to crown court for trial. They were released on unconditional bail until the hearing on March 9th.

Gallagher recently appeared on his father’s single One of Us, and he has worked as a model for Adidas. – Guardian