Gig of the week: Something Happens, Coronas and Delorentos

Tried and tested Irish acts, and a few surprises, for Christmas week 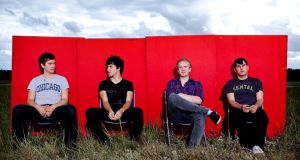 Christmas may arrive but once a year, but Irish music acts seem to be around quite a lot; at this time of year, it seems as if they pop up at venues around the country in order to (surely not?) top up the coffers to offset the cold post-December months. This year is no exception, although there are one or two surprises, which we will get to shortly. Let’s focus on the tried and tested, the ones you may have been to before, yet which still deliver the goods.

Long-established Irish group Something Happens have been around since the mid-1980s, and although they have never split up they no longer write new material (or release repackaged albums). They still perform sporadically, though, usually at selected open-air summer festivals and always at Dublin venue Whelan’s at this time of year (Saturday, December 28th). All of the original members are gainfully employed in various areas of the media/music landscape, so they remain one of the very few Irish acts of their, er, vintage, not to necessarily earn money solely from gigging. This gives them something of an advantage. When you tie that into the fact that most of the songs on their 1988 debut album, Been There, Seen That, Done That, and its 1990 follow-up, Stuck Together with God’s Glue, cover a golden time in Irish pop/rock, then seeing them live (especially in a small indoor venue such as Whelan’s) is still a major treat.

Somewhat younger Irish bands such as The Coronas and Delorentos gig much more, and regularly release new music. Indeed, The Coronas have spent much of the past two months in Ireland performing in all sizes of venues, aiming to reach out to their avid fanbase with some eye-to-eye contact (never a bad thing when, like this band, they have long-since outgrown small venues) as well as road-testing recently written material. The next week will see the band capitalise on such strategies with appearances at Dublin’s Vicar Street (Monday, December 23rd), Castlebar’s Royal Theatre (Saturday, December 28th) and Killarney’s INEC Arena (Sunday, December 29th).

Delorentos, meanwhile, cap off a recent nationwide jaunt with a special Christmas show at Whelan’s (Monday, December 23rd). It is the final date of their A Decade of S.E.C.R.E.T.’s Tour, which celebrates the 10th anniversary of their second album, You Can Make Sound. Next year will see the band release a new album – the follow-up to 2018’s extraordinarily good True Surrender – so you can expect to hear new material, as well as tunes from their superb albums, Little Sparks (2012) and Night Becomes Light (2014).

Pursued by Dogs and David Keenan

And what about those surprises, I hear you mutter. Well, one of Ireland’s newest under-rated groups, Pursued by Dogs, present a stripped-back show in MVP, Upper Clanbrassil Street, Dublin 8 (Sunday, December 22nd). Like the good sorts they are, tickets are a trifling €5, and all proceeds to the Dublin Simon Community. As well as tracks from their 2018 self-titled debut album, the band will be previewing new material, which will no doubt see the actual light of day next year.

Another surprise? The past year or two has seen the emergence of Dundalk, Co Louth, as a veritable hotbed of music talent. Two of the town’s notable success stories – David Keenan and Just Mustard – are seeing out 2019 in the only way they know how: by playing honest-to-goodness white-knuckle shows. Keenan, quite literally, brings it back home when he plays two shows at the town’s fine Spirit Store venue (Sunday, December 22nd/Saturday, December 23rd), while Just Mustard kick out the feedback before Christmas Day at Dublin’s Button Factory (Saturday, December 21st) and after it at Limerick’s Dolan’s (Saturday, December 28th).

After all of these, who’s up for a silent night?

Fathoms: The World in the Whale goes deep
10