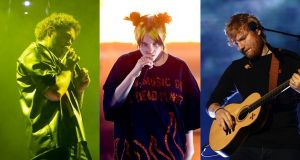 The music-streaming service has also announced its most-streamed artists, tracks and albums globally this year and over the past decade.

In the past year Post Malone has had more than 6.5 billion streams. Billie Eilish ran him a close second, with more than 6 billion plays – and had the most-streamed album globally of 2019, the first time a woman has taken that top spot.

Eilish’s hit track Bad Guy has had more than 990 million streams around the world in the past 12 months, beaten only by Señorita, by Shawn Mendes and Camila Cabello, which has topped a billion plays.

The most-streamed track globally of 2019

The most-streamed track of the decade globally

1 Divinely Uninspired to a Hellish Extent by Lewis Capaldi
2 When We All Fall Asleep, Where Do We Go? by Billie Eilish
3 Hollywood’s Bleeding by Post Malone
4 Thank U, Next by Ariana Grande
5 No 6 Collaborations Project by Ed Sheeran

1 When We All Fall Asleep, Where Do We Go? by Billie Eilish
2 Hollywood’s Bleeding by Post Malone
3 Thank U, Next by Ariana Grande
4 No6 Collaborations Project by Ed Sheeran
5 Shawn Mendes by Shawn Mendes

Globally: Most-streamed artists of the decade

Globally: Most-streamed tracks of the decade

1 Shape of You by Ed Sheeran
2 One Dance by Drake, Kyla and WizKid
3 Rockstar by Post Malone, featuring 21 Savage
4 Closer by Halsey and The Chainsmokers
5 Thinking Out Loud by Ed Sheeran