Review: Dublin’s gentrification is inspiring a generation of musicians, led by Fontaines D.C. 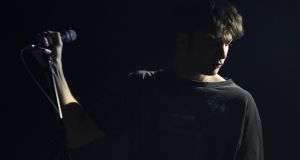 “Is it too real for ya?” An English woman in the smoking “area” upstairs in tonight’s hall has fallen victim to the ear worm. “I woke up at 7.30am with the song in my head. I can’t get it out.”

She is oblivious to Conor Curley, a guitarist in Fontaines D.C. standing right beside her, silently sucking in the night air. The band’s star power is paradoxically rooted in the art of the unassuming. Too real indeed.

There’s a lull in a storm outside Vicar Street on Thomas Street in Dublin’s Liberties on Sunday night, the second of two gigs at the venue. The place is wedged tighter than a morning-after chicken fillet roll. The weather: it’s the type of angry, familiar, swirling squall that imbues both climate and song with pathetic fallacy. Fontaines D.C. are home.

The Irish band released one of the records of the year with Dogrel, a Mercury Music Prize-nominated album that plays on the term for middle ages verse, the echoes of which tonight bounce off the last vestiges of medieval Dublin, a crumbling wall down the street lit by diffused lighting struggling to un-dim in the rain.

The support act Warm Drag deliver a blistering, leather-clad FU starter course. Carlos O’Connell of Fontaines D.C. wanders on stage at one point to play guitar on their tracks.

Aslan, Christy Moore, Lankum, Villagers, Damien Dempsey, Bagatelle. The television screens above the crowd in Vicar Street announce upcoming gigs. Eras overlapping with eras like coasters being flipped by bored day drinkers in the Liberty Belle. Waiting for the band to appear, two men in the crowd lean over five other heads to toast their plastic pints of Guinness. Johnny Cash’s I Hung My Head plays over the PA.

Big is the first song. Band and crowd are on a precipice. The tension is coiled. Frontman Grian Chatten holds his arm behind him like an invisible Garda has just lifted him on Meath Street. He slaps his own face, shakes his right hand with cartilage-rupturing urgency, pacing like a cockerel about to be bet on.

Television Screens blooms beautifully. The Lotts exudes tenderness. Liberty Belle seeds an emotion that is compounded by the proximity to the place they’re referring to.

But when Boys In A Better Land takes hold, the place erupts. It is emphatic to the point of ecstatic. The waltz of Dublin City Sky cradles the crowd as a form of aftercare, but then Hurricane Laughter shatters the evening like a bottle of beer on a bouncer’s shoulder. This is a city on the edge, as we hurtle towards the end-of-decade cliff.

There is no waffle nor banter. Too Real arrives as the final statement. It rises into the rafters, the penthouses, the co-living builds, the student accommodation, the contemporary tenements. The tension is finally unleashed, released. There is no encore.

Like most European cities, Dublin has been beset by a series of invasions and settlements for a thousand years. The latest changes are calmer, lurking, nebulous. But the discombobulating insidiousness of gentrification and the seep of late-stage capitalism and tech-driven displacement now act as inspiration for a new generation of Irish artists across hip-hop, rock, trad, folk, punk, and electronic music. It’s not a silver lining, it’s a critical response.

Fontaines D.C. are at the vanguard of this rattle, believing that there is still life to be squeezed from a town’s character, desiring an authenticity to be sustained even as the artists that tell these stories depart.

“My childhood was small, but I’m gonna be big.” Fontaines D.C. have been on the road for some time now. Their manager, Trevor Dietz, was asked at a talk during Ireland Music Week what his were plans for other emerging bands. He didn’t get into this game to manage bands, he replied, but to manage Fontaines D.C.

There is a particular siege element to the gang of band on their ascent. No one gets in or out. It’s them against the world. The very building they’re playing in tonight is set to be developed into a hotel. Although the Vicar Street venue itself will expand in capacity once it reopens, it is another emblem of a literally shifting landscape in Dublin city. But some things will always be familiar; the beauty of poetry fashioned into music that moves a town, and makes the local universal as a world catches on.

Fontaines D.C. root their songs in these Dublin 8 cobblestones, but there is a much wider path open to them now, the runways and highways of a world where so many young Irish men have gone to find their place, always looking back to make sense of it all.

If the artist offends, should we pluck out their work?
5