R&B star bought fake ID that showed Aaliyah’s age as 18, according to US prosecutors 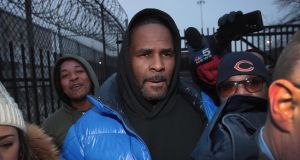 R Kelly leaving jail on bail in Chicago in February. He had been held after turning himself in to face 10 counts of aggravated sexual abuse. Photograph: Scott Olson/Getty

One persistent question has dogged R Kelly’s two-decade music career: how was the R&B star able to marry the singer Aaliyah in 1994, when she was only 15 years old?

On Thursday, federal prosecutors in Brooklyn accused Kelly of bribing an Illinois government employee in order to obtain phony identification for Aaliyah. The fake ID was to be used to obtain a marriage licence that listed her age as 18, a person familiar with the matter said. Their marriage was later annulled.

The new allegation expands on an existing racketeering indictment filed in New York against Kelly that accuses him of sexually exploiting underage girls and coercing them into illegal sexual activity. This year the 52-year-old has been criminally charged in several jurisdictions on allegations that he sexually abused minors.

Aaliyah, whose full name was Aaliyah Dana Haughton, died in 2001 in a plane crash, at the age of 22. She is identified in the new indictment only as “Jane Doe #1”. In a television interview this year with Good Morning America, Steven Greenberg, Kelly’s lawyer, said his client had “no idea” Aaliyah was 15 when they married. “My understanding is that she did not claim to be 15, and in order to get married she had to lie about her age,” Greenberg said at the time. Greenberg said on Thursday that the new indictment “does not appear to materially alter the landscape”.

More than two decades ago Vibe magazine reported that an Illinois marriage licence for Kelly and Aaliyah listed her age as 18. Kelly, whose full name is Robert Kelly, was 27 at the time. The license was dated August 31st, 1994, the day after Kelly allegedly paid the bribe.

In the Brooklyn investigation, prosecutors have obtained marriage and annulment records for Kelly and Aaliyah, as well as Aaliyah’s birth certificate, according to a court document filed on Thursday. Among the evidence prosecutors have collected are records from the Illinois department of human services and the Illinois secretary of state, the filing said. The new indictment did not specify which agency employed the individual who allegedly took a pay-off from Kelly.

Aaliyah was 14 when she made her first album, Age Ain’t Nothing But a Number, which was released in 1994 and produced by Kelly.

Kelly has faced long-standing sexual-abuse accusations. Criminal activity from 1994 would normally fall outside the statute of limitations, preventing prosecutors from filing charges for the act in 2019. But the broad racketeering charge Kelly faces in Brooklyn – where he is accused of leading a criminal enterprise that recruited his fans, sometimes underage girls, to have sex with him – allows prosecutors to introduce acts from any time period that were part of the alleged conspiracy. The statute has typically been used to take down mob organizations.

His associates arranged for the travel and lodging of his sexual partners. But once they arrived, prosecutors said, the women had to follow strict rules. They were not allowed to leave their room without Kelly’s permission and had to call him “Daddy”. They were isolated from their friends and families, making them financially dependent on Kelly, the indictment said.

Another lawyer for Kelly, Douglas C Anton, has said Kelly was not involved in any criminal enterprise and called the women “disgruntled groupies”.

The Brooklyn indictment, which was originally filed in June, also accuses Kelly of kidnapping, forced labour, failing to disclose a sexually transmitted disease to sexual partners and producing child pornography. Kelly has pleaded not guilty to the charges. He is being detained in federal custody in Chicago.

The singer was first arrested in 2002 on child-pornography charges stemming from a tape that prosecutors in Chicago said showed him having sex with and urinating on an underage girl. He was acquitted in 2008 on all counts.

A federal prosecutor in Brooklyn recently said Kelly had paid off witnesses in the Chicago case who wanted to co-operate with the authorities. His lawyer said the witnesses simply decided not to testify. – New York Times